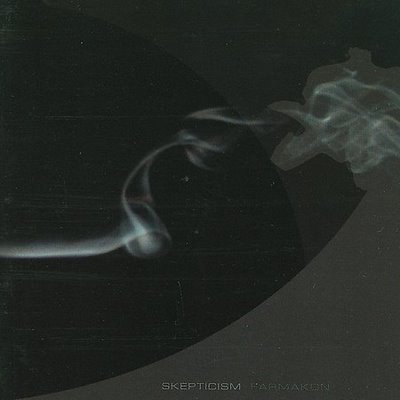 Skepticism, after a long hiatus, has finally returned with a new LP. Now to begin, this LP is very, very, very different from the atmospheric qualities from previous efforts like Stormcrowfleet and Lead And Aether, although its differences make it great and make it tedious at the same time, so let us begin with a review.

Farmakon, in any sense, is Finnish for “pharmacology”, which translates to “wise remedy”. Just look at the lyrics to the song 'Farmakon Process' if you don’t believe me!

But let’s now get into the nitty grittiness of Farmakon. The first song, 'The Raven And The Backwards Funeral', literally opens up the album with such anger and power. Some would say that the lack of keys suits the song and the album respectively, but I think otherwise. Without keys, it sorely lacks the atmosphere of its forefathers, and that seemed to disappoint me. The next song in line is the greater and more “moving” 'Shred Of Light, Pinch Of Endless'. The fading in guitar notes with a new sort of sound is prominent in Skepticism’s new track. It does have a sense of anger regarding the song with the organic keys and the crushing drums and guitar.

Untitled, or track number 4, really brought me down. This new sort of song is what made this album my least favorite out of the Skepticism catalog. It’s boring and droning. Though I love my drone when Sunn O))) and Earth come into play, but when Skepticism tries that act, it really brings a low score. There's not much more to say about the record except that the two sister songs 'Nowhere' and 'Nothing' are pretty much the life and soul of the LP. I think this album deserves what it got, an 8.5.