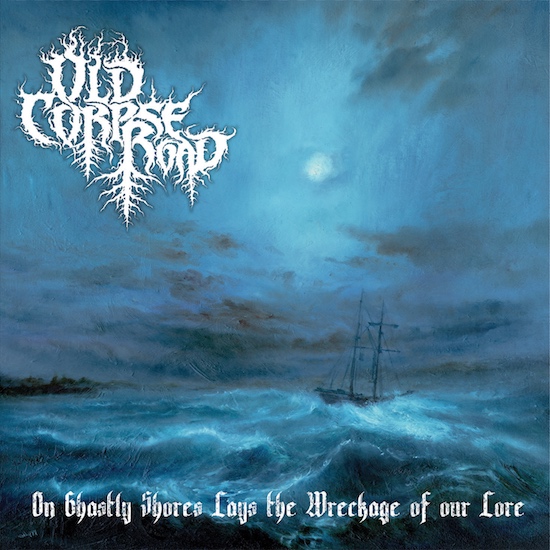 The gothic literary movement, which emerged in Britain during the second half of the 18th century, brought a fundamental change to horror literature. This literary style, which was introduced by British authors, emphasised on pleasurable horror, most typically a mix of beauty, romance and fear. The style would reach its peak in 1818 with Mary Shelley's Frankenstein which is considered today as being simultaneously the first modern horror and science fiction story. It is thus undeniable that the gothic literary movement, in both its development and expansion, is deeply rooted in British culture and history.

It is with a desire to translate dark British folklore into music that the band Old Corpse Road opted for a distinctive gothic sound infused within their brand of black metal. While the style had been previously attempted by the like of Cradle of Filth and Hecate Enthroned, Old Corpse Road presents, in their 2020 album On Ghastly Shores Lays The Wreckage Of Our Lore, a different and refreshing take on the genre.

This third full length is a natural progression from the second album, Of Campfires And Evening Mists. As such, the sound we came to expect from Old Corpse Road is ever so present. The grandeur displayed by the background orchestral arrangements is ever so present as well as the slow and melancholic guitar harmonies all of which are laden on a of 90s black metal foundation. While the influences coming from Cradle of Filth's early albums are undeniable on the surface, a deeper inspection reveals a big difference in their interpretation of this gothic inspired black metal. In fact, Old Corpse Road has a much more introspective approach where the raw aggressivity of black metal meets beautiful harmonic guitars and folk inspired melodies. 'Black Ship', the third song of the album, best exemplifies this meshing of styles and emphasis on grandiosity. In fact, while the first few minutes of the song are dedicated to both an acoustic intro and a aggressive black metal section, the second half of this eleven minute song is dedicated to ominous melody that is alternatively played on organ, guitar and finally on what sounds like an Egyptian oud. This musical progression and emphasis on grandeur is both what made Old Corpse Road unique and interesting.

The upgrade in production is noticeable through a better mixing of the vocals. In fact, being such a central piece to Old Corpse Road's music, the usage of multiple type of vocals by different band members allows to showcase a lyrical diversity. The song 'Harbinger of Death', the shortest and probably the straightest forward song on their album, shows how the different type of vocals, namely spoken words, growls, shrieks and chants brings different colors to the song. The longest song, 'The Ghost of the Ruinous Dunstanburgh Castle', is also a clear example of how switching the vocal style can impact the overall feeling of the song. Its beautiful outro is very effective in giving the listener the distinct impression of having someone recount a folk story by having the lyrics delivered through spoken words.

The folk elements present in the second album Of Campfires And Evening Mists are mostly relegated to the background in this third full length album. 'Sea Fire' is arguably the only song that contains overt folk elements which is delivered through the group chanting. While it does reduce an amount of complexity within Old Corpse Road's sound, it does leave more space for experimental songs such as, 'As Waves Devour Their Carcass', and 'Waterlore', both of which play with a degree of ambient an atmospheric textures.

'Demons of the Farne', the sixth song, is the album's best representation of a common theme in gothic literature, namely the juxtaposition of romance and horror. The background orchestration creates a grandiose and beautiful atmosphere where dismal, sorrowful and melancholic melodies are intermittently played giving the listener feelings of both fear and awe.

Old Corpse Road opted for a style which was much rather influenced by the gothic subgenre on On Ghastly Shores Lays The Wreckage Of Our Lore as guitar harmonies, the orchestral arrangements and the vocal delivery all focus on this subtheme of beauty and romance within a very dismal background. As such, the folk instrumentation and melodies which were present in Of Campfires And Evening Mists are not as much present. Old Corpse Road's musical progression is certainly interesting, and I would certainly recommend the album for anyone interested in exploring a very unique sound of British black metal.