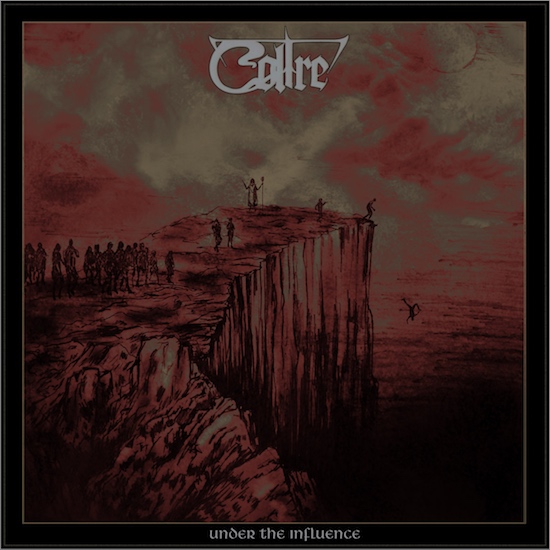 I love this little jewel of an EP Coltre has released; the UK based trio surely knows how to show respect to the spirit of the late 60s to 70s with their first effort, Under the Influence. It's not just the music that hearkens back to the golden days of rock and roll recordings, but the production itself takes on a sound that seems to have been engineered via the analog method. Hence you get the feeling that you're listening to an album that was created around such a time. And coming from the UK who arguably have the title for inventing heavy metal thanks to Black Sabbath, Coltre adds to the title of British veneration with their fine ode of sorts to the era.

'Lambs to the Slaughter' is an incredible first track to get things moving, it's 7-minute run-time seems fitting for the way the song is structured; it fulfills the vocal, drumming and riffing departments with exceptional sonic fidelity of the 70s, and also has a message that is very much relevant for the here and now; a cognitive itch for the listener. The lyrics cut deep into the consciousness and the music capitalizes on this as it's given a greater deal of exclusivity on the track. Soaring guitar leads take a plunge into sweeping guitar solos that fetch the lyrical weight of the songs with 'On the Edge of the Abyss' (instrumental), 'Plague Doctor' and 'Lambs to the Slaughter' specifically stealing the spotlight.

'Without a thought, you're stuck in their possession. Mindless clones, a slave to all instructions. Think for yourself, don't follow without question. You flock like sheep, like lambs to the slaughter'

Moving on to tracks like 'Crimson Killer' and 'Plague Doctor', you begin to get a better understanding of where Coltre gets their influences from. Coven, Diamond Head, Thin Lizzy, Deep Purple, Blue Oyster Cult, and Pagan Altar come to mind during the time engaged in listening to Under the Influence. Coltre put on a musical showcase when they blend said influences with their heavy metal sound and technique.

The vocals have a mid-ranged calm about them that works well with the guitar tone used; therefore what you get is more singing than loud untempered vocal outbursts. This is one of the main selling points of Under the Influence, provided ever too often in traditional heavy metal you get great instrumentals that are dragged down by lackluster singing. Glad it's the total opposite with Coltre, given Marco can conduct and temper and direct his vocals accordingly.

Under the Influence is a well-rounded performance with each aspect given adequate room to shine. No one element appears overused or out of place, all pieces are neatly assembled and allocated enough time to significantly and positively impact the album. They correspond with the tone of the various messages and truly sound attached to the cover artwork that embodies the ideology behind 'Lambs to the Slaughter'.

Coltre is going to score big with Under the Influence, old-timers of metal will love the music and production-quality, both of which are indicative of the era when vinyl reigned supreme!