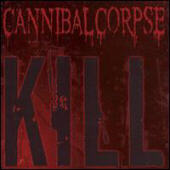 So here it is, finally, after what seems like waiting without water for the past two years. The boys from Florida have return with their 10th full length album, entitled, simply enough, Kill, and this album does just that.

There have been a few changes since the last album, The Wretched Spawn, and the most notable of these has been the departure of Jack Owen, one of the original band members. Replacing him is Rob Barrett, noted for his work with Malevolent Creation, as well as Vile from Cannibal Corpse. Pat O'Brien replaced Rob after he parted ways with the band, so it's now interesting because Rob is playing with his replacement.

In my opinion, this is simply the best line-up Cannibal Corpse have ever had, or ever will have. I don't really see it changing after this point, and sure hope it doesn't. Everyone who knows me knows that I am a big fan of Pat's work, and I also love pretty much everything Rob has done with his mighty Les Paul. The current guitar duo in Cannibal Corpse is the deadliest ever, and that's saying something.

To finish up the line-up we have the irreplaceable Alex Webster on bass guitar, George "Corpsegrinder" Fisher on vocals, and Paul Mazurkiewicz on drums. How can you go wrong with this line-up? Quite simply, you can't.

Another thing worth noting is that Hate Eternal mastermind Erik Rutan has taken over producer duties with this album. The band, being impressed by Rutan's work on Hate Eternals "I, Monarch" album, liked his work enough to give him the chance to work with the mighty Cannibal Corpse; and the results are not disappointing.

There was a lot of hype and speculation for this album. Some people didn't like the title Kill as they found it to be too simple. Others didn't like the cover artwork, which is not really artwork, but just the Cannibal Corpse logo and the word KILL on the cover. Old and new fans alike thought that this would somehow, in some stupid way unknown to me, take away from the music on the album.

Enough with the introduction, let’s get to the music. For as we all know, that's the only thing that really matters. Cannibal Corpse could put a bottle filled with urine on their cover for all I care.

I spent the entire weekend listening to this album, and listened to it over 15 times, back to back on my extremely sinister home stereo system. Boasting over 400 watts of pure bone-crunching power, you want to listen to this album LOUD. Here we go.

Track one, "The Time to Kill is Now" Straight off the bat, you've taken a sledgehammer to the head. Corpsegrinder is literally pouring his malice all over you, and the guitars are ripping at your flesh like millions of little insects. Atonal guitar leads are swarming over you. The song has a great vocal groove and the whole band sounds tighter, meaner, faster and heavier. The riff at 1:33 is simply amazing, very heavy with good use of artificial harmonics.

Track two, "Make Them Suffer" was one of the samples released by the band, so most of us already know the song. A great riff kicks everything off, followed by a trademark Corpsegrinder scream. The interlude at 0:28 tells you that Pat O'Brien has been involved in the making of this song for sure, as it's technically brilliant yet melodic at the same time. The rest of the song roars out of your speakers with ease. Another great riff at 1:16, followed by a classic mosh riff, Cannibal Corpse style right after it. Fucking awesome stuff.

Track three, "Murder Worship" bursts out of your speakers without granting you a moment of breathing space. The song kicks in with a nice riff, which then paves the way to an even nicer riff for the verse. Alex can be heard in all of his glory, something that was sadly missing on the last two albums. Here, the bass is rattling the fucking calcium off of your teeth. Corpsegrinder sounds unstoppable, very powerful and menacing. Another classic Cannibal Corpse song, almost instantly.

Track four, "Necrosadistic Warning" is a fucking monster. Quite possibly the best song on the entire album, it kicks in with a fantastic riff, then paves the way for no nonsense, headbanging death metal. The riff just before the verse is short yet awesome, and the verse itself is also different and interesting. The guitar work throughout is top-notch, with Pat and his new partner in crime Rob Barrett spewing out lethal riff after riff like there's no tomorrow. The song is sure to be a live favorite with the line "Necrosadistic warning, you will not rest in peace!!" Brilliant from start to finish, and the song concludes with some nice guitar solos similar to early Slayer.

Track five, "Five Nails Through the Neck" is another unstoppable track. The album seems to be full of them. The boys have literally cut all of the fat off of this record, it just keeps kicking and kicking with no let up at all. The song in question is another worthy Cannibal Corpse track, another one I can see becoming popular live. The section at 1:33 is fucking awesome. You expect the band to go into full blown speed mode, yet even I was surprised when they held back and went into another crunch section. Unpredictability in it's finest form.

Track six, "Purification By Fire", makes you wonder what Pat's mother fed him while he was a child. Energy drinks mixed with vodka and battery acid, it seems. The moment the song comes on, it's instantly recognizable as Pat's style. Extremely fast, dissonant riffing, technical enough to make so called "technical" death metal bands seem like babies. We are graced with two guitar solos before the actual verses kick in, and the band sounds air-lock tight. Corpsegrinder sounds amazing, following the complex guitar and bass lines with ease, proving once more to idiot doubters that he is the man, and the most perfect vocalist for Cannibal Corpse. I'd go over the riffs in this song but there really is no need, as you have to hear it to believe it. Let’s just say that Pat has outdone himself again. Also, tip of the hat to Paul, who simply destroys his drum kit all throughout the song. Favorite section in this gem is at 1:57. Though it only lasts for about 6 seconds, it's probably the deadliest passage on the entire album. I can see Pat's strings melting all the way from here. Top notch.

Track seven, "Death Walking Terror" is another one of my favorites from the album. Kicking in with an excellent riff, it's Alex's bass that catches my attention each and every time. It's such a relief and a treat to be able to hear him again so clearly, not to mention loudly. This song is infamous in my house because it managed to rattle every DVD I own clean off the shelves. I didn't even bother picking them up as I knew there were still 6 tracks left on the album. This song is sure to be another live favorite.

Track eight, "Barbaric Bludegeonings", written by the one and only Rob Barrett. This is fucking old-school, fellas. You just gotta love the riffs Rob comes up with. It reminds me of Vile and also some of the Malevolent Creation stuff. Rob's style is very different from Pat's, so it's easy to distinguish their parts, which is a relief. A great guitar solo kicks in at 2:25, and you can all be thankful that Rob is back in the band. A solid mosher from start to finish, the song doesn't let up for a second, and once again, Corpsegrinder sounds amazing.

Track nine, "The Discipline of Revenge", starts off with an extremely impressive bass intro, with the guitars following closely behind, eerily creeping up until they finally take over. This track reminds me more of the "Bloodthirst" days, but that could just be me. Whatever it reminds you of, you can be assured that it's another ass kicker from the Masters of Death Metal. The song is generally mid-paced, that is until the CD reader hits you at 1:44 into the song. Another one of the best sections off of the entire album. What follows next is classic Cannibal Corpse, heads down, riffing.

Track ten, "Brain Removal Device", kicks in with a very interesting riff. Still no let up, still no moments of air. The song starts off slow, then kicks into full speed soon enough. The entire band is locked into target, grinding their instruments like the pros they are. They seemed to be tuned to torture and mutilate, and it does not disappoint at all.

Track eleven, "Maniacal", bursts out of your speakers frantically, like there's some sort of rush. It's begging to be heard, it's begging to drive you face first into the ground. The song starts out with a fast, melodic and heavy-as-fuck riff, then when it finally kicks into 0:43, you better fucking duck for cover. There's no messing around. None at all. The section of 1:19 delivers some more choppy riffs, followed by some more early Slayer type guitar solo work. The song is short, clocking in at 2:12, but that's more than enough to cave your face in.

Track twelve, "Submerged in Boiling Flesh" is another song I can see as being a classic and fan favorite. The riffing is once again top notch, with God knows how much distortion on the guitars. Corpsegrinder sounds pretty loud in the mix, and for good reason. The man is unstoppable, bellowing enough air of of his lungs to freeze half of Africa. The section at 0:50 is fucking kick ass. "The struggle is useless!!"

Track thirteen, "Infinite Misery" is an instrumental track penned by Pat O'Brien. Starting off slow and haunting, it slowly builds up speed and paves the way for what is one of Cannibal Corpse's most haunting songs to date. The perfect way to end an almost perfect album.

So, that pretty much sums up my review. If you're one of the people who doubted Cannibal Corpse for even a second, then you're an idiot. They are perhaps the only band in all of metal existence that have always stuck to their guns, played what they wanted to play, and remained loyal to their fans, while still improving and polishing their sound and technique. They never let themselves down, and never let their fans down, which is the most important thing, and a lot of bands would love to make such a claim. After 10 full length albums, I assume that's a very tough thing to do. But the boys pulled it off anyway.

Kill has the brutality of Vile, the atmosphere of Gallery of Suicide, and the dark features of Bloodthirst. So many elements are all combined at the same time, and this album will stand out as one of the most perfect Cannibal Corpse albums, ever.

.4 points deducted because the vocals are a bit too dominant in the mix. Other than that, everything sounds fantastic.