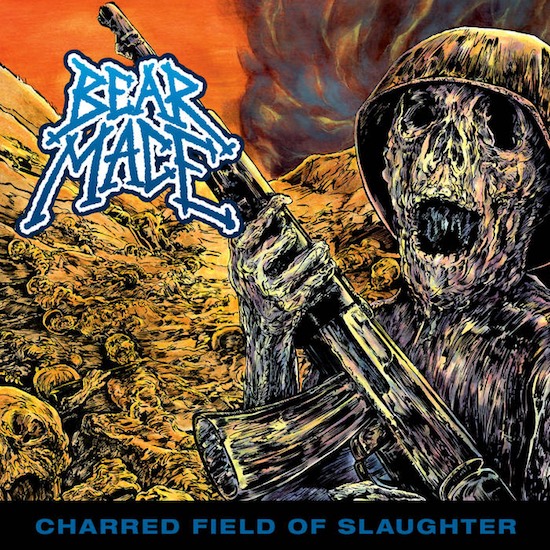 So, in keeping in tandem with the current rash of Chicago bands releasing new material this summer, Bear Mace offers up its second full-length release, Charred Field of Slaughter, and it appears that this release is much more rounded and solid than the debut. Granted, I found the debut tangible and quite good in its own right, it's this album that takes it up a notch or three and just hits hard right out of the gate.

The death metal topics the band covers are pretty typical for the most part: death, war...and bears? No, your eyes need no adjusting, you're not experiencing a high school acid trail long since passed, and you're not at all being “fucked with.” Bear Mace, indicative of its name, writes the occasional song about our furry and ferocious friends, but do not let this dissuade you from the band by any means. From the voracious foray into personal empowerment and a raging need to be conquerors as opposed to victims, I gather the band consciously puts forth a message of personal strength and complete subservience to inner ascension. It's a topic I find more entertaining and encompassing than the typical 'entrails-falling-onto-insert tangible edifice-here.' To be personally lifted and (GASP!) feeling good after hearing death metal? Perish the thought....

From the 2014 demo (Kodiak Killers) up, Bear Mace has evolved ever nicely, evening out the current field with eight strong, well-crafted tracks that have the right amount of punch and style, all the while staying true to the sounds and feel that death metal always brings when correctly implemented. The slower, heavier tracks (i.e. 'Let Crack the Whip') show a sense of old-school volatility and modern-era attention to some classic hooks and memorable riffs usually lost to muddy production or lack of ability to build on them. When the track 'Plague Storm' just plows through the speakers, you immediately see the band is not stuck in the slower death metal that borders on death / doom for the entirety of the album. This is one of the songs that will undoubtedly start a circle pit, the tribal dance we metalheads are known to engage in from time to time. Once again, the hooks are there, especially underneath the solo, and this vocal in particular is just a throaty scorn that summons up the ugliest parts of the genre – all good and positive attributes.

With no weak tracks to be had on Charred Field of Slaughter, I can easily and comfortably say that Chicago is nicely represented again in this otherwise crappy year for humankind. With a handful of other local bands issuing some new material this year, they can't deny the Windy City much longer. Bear Mace takes the oft-derivative death metal reins and offers up a jagged chunk of concrete, sharp and uncomfortable to most, and delivers it with a hometown assault that isn't just for locals any longer. Once pulled into the sounds herein, I have an idea that this album may make some noise outside these city limits...and that's always a good thing.