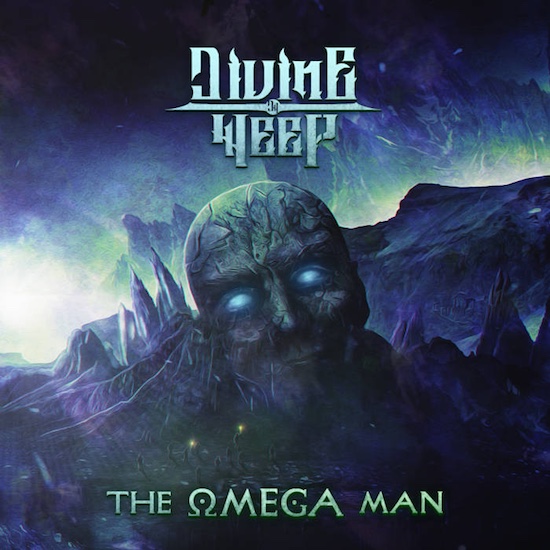 Five years we had to wait for the second album of Białystok's Divine Weep. It was released by the newly established stable of Ossuary Records. The album was made of nine power/heavy metal walls of sound charged with energy and was dressed in 8-page booklet and cover by Dawid Boldys.

On The Omega Man, Divine Weep continues to follow the path they found themselves on working on material for the 2010 demo, and then releasing a slightly expanded version on the 2013 Age Of The Immortal. How much this path is trampled, judge it for yourself, I will follow it with Divine Weep. Although I knew what to expect, I was positively surprised many times while walking along it. The first thing that is noticeable is the progress caused by replacement of the vocalist. Mateusz, who primarily moves within the characteristic for heavy metal high parts, is also very easy and successfully entering vocal areas occupied by death and black metal. Thanks to this, songs such as ‘Firestone’, ‘The Screaming Skull Of Silence’, the half of ‘Walking (Through Debris Of Nations)’, the ending of ‘Mirdea Lake’ and ‘The Omega Man’ gained more power and ferocity.

Guitar arrangements, which were already a strong point of Divine Weep on Tears Of The Ages, are also found on this album. A flowing variety of arrangements and solos that melt in the ears are the essence of power/heavy metal made by Divine Weep. Perhaps as a counterbalance to the violent tendencies of the musicians, we have more lyrical accents (ending of ‘Cold As Metal’, ending for ‘Journeyman’, movie soundtrack like ‘Die Gelassenheit’ and half of ‘Mirdea Lake’) and ballad accents (‘Riders Of Navia’ and ‘Walking (Through Debris Of Nations)’ . As a fan of strong sounds, I prefer high-energy compositions and luckily there are more of them here. I also have to remind about the rhythm section: the bass lines in ‘Riders Of Navia’, ‘Die Gelassenheit’ and ‘The Omega Man’ or the percussion hammering in ‘Firestone’ and ‘The Screaming Skull Of Silence’ are the distinguishing feature and value of the Bialystok guys.

To finish my arguments about Divine Weep two, I must mention that it was recorded and mixed in the "Dobra 12" studio. Referring to the debut, I must say that I liked the sound of the drums more there, but as it is said one man’s treasure is another man’s trash. I've seen Divine Weep in action a few times, so I'm looking forward to their stage fire, but for now I will reach for The Omega Man again and invite you to do so as well.