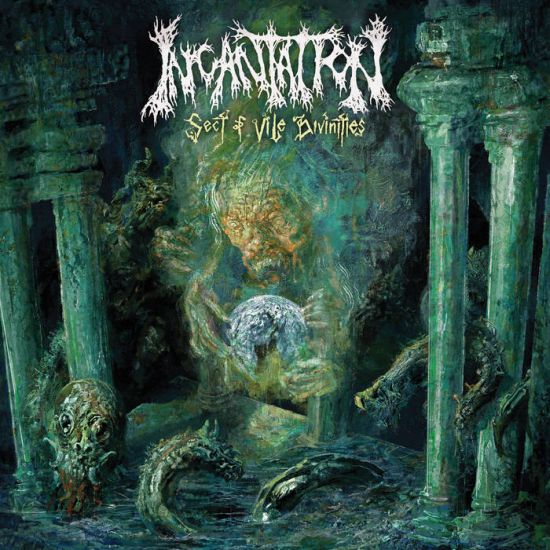 When word broke of a new Incantation album, like many others receiving the good news, I too was elated, but at the same time, I knew that it would be better to temper my expectations. Remembering the disappointment that Profane Nexus was and the hype around its release, I was careful as to not repeat the same mistake I had made at the time of setting myself up for displeasure. Not to say that by a long stretch Profane Nexus was a bad album, rather it was tame and seemed to have nothing of significance happening in comparison to past albums by the band. I had to keep my expectations in check and bring it down a bit so as to avoid a reoccurrence of the same underwhelming event.

The first single was released for Incantation's landmark 12th full length album, Sect of Vile Divinities titled 'Propitiation', that immediately after hearing, felt like the workings of a totally reinvigorated band. This is in contrast to Profane Nexus that sounded of a group treading on the last morsels of juice in the tank. And for further affirmation, the Eliran Kantor gorgeous cover art caught sight of many including myself that signaled a return of sorts to the early 2000's, a return to better form. It was more than evident Incantation had a score to settle, something more to prove (believe it or not); the head honchos of the genre were not about to lay down and relinquish the crown.

The second promotional single and video followed, titled 'Entrails of the Hag Queen' and with this track I thought to myself it was safe to unchain my desires for Sect of Vile Divinities and let them run wild. More than assured Incantation would not disappoint, so I did a cannonball into the pool of Sect of Vile Divinities.

And with a pitch as clear as spring water and the speed as fast as a cheetah, Incantation assert their footsteps onto territory they helped craft with a trampling invitation extended; 'Ritual Impurity (Seven of the Sky is One)'. John McEntee's vocals haven't been affected by his age and years of growling abuse, Kyle is still a manic on the kit, and the riffing recklessness of both McEntee and Sonny is mended with Chuck's bass. This is the kind of start one would expect from Incantation and it delivers some assurance that the album would meet the criteria of a now historic band.

In come the promotional tracks 'Propitiation' and 'Entrails of the Hag Queen', a true to form Incantation recovers from the tiring eyes of 2017s output (that sounded like random music created while tuning one’s instrument); hence, we get the guts of the band. Their death doom metal signature style is in full swing here and surprisingly are just as good as most songs on Sect of Vile Divinities. It’s usually said that promo tracks are the weakest on any select record, but here I beg to differ. These two songs stand well on their own and did not need accompanying videos.

Earlier in the year John McEntee had been involved with newly formed Beast of Revelation that put out "Ancient Ritual of Death" through the monstrous Iron Bonehead Records while drummer Kyle Severn had contributed to Shed the Skin's new album, "The Forbidden Arts", released on Hells HeadBangers. Both of those somewhat uttered in the face a word of preparation for what would soon be Sect of Vile Divinities. And with that said, I found some songs on the record sharing likeness to what had been manufactured in Beast of Revelation and Shed the Skin. 'Ignis Fatuus', 'Chant of Formless Dread' and 'Scribes of the Stygian' while showing off some key features of Incantation such as the pinch harmonics and technical transitions, simplify things a bit by revisiting the barer bones approach used in those bands.

The album acts in a resourceful manner by taking pieces from their vast and legendary catalogue to form what you hear on Sect of Vile Divinities. However, Incantation do this in a crafty way to keep the record from sounding fragmented. This is a massive improvement over Profane Nexus, that on many instances, failed to display any sort of continuity. This made the effort appear uninteresting and often times than not, present itself in the image of a dilapidated, derelict and lifeless posture. Total opposite this time. Tracks appear energetic and engaging from inception to conclusion with some of Incantation's best material on the album appearing as latter entries such being 'Scribes of the Stygian', 'Unborn Ambrosia' and 'Siege Hive'. It’s such a well assembled album that even for its runtime of 40+ minutes, it feels like a lot less; heck, Incantation could have even added a few more songs and Sect of Vile Divinities would still have its flavor intact.

The production is mint clean, all instruments can be heard with sublime clarity. The drumming and bass in particular benefit from this more than anything else on the record. A concussion inducing combo of pummeling pulses lead the way on this one and adds to the invigorated spirit of Incantation.

Sect of Vile Divinities is representative of a band awoken to their true status within death/doom metal. Safe to say it as well worth the wait and hype.