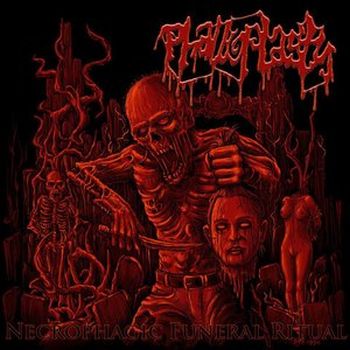 Stylistically you can place Phalloplasty neatly among the likes of Viral Load, Putrid Pile, Vomitous or early Devourment and from what I can make out of it, lead man Zack Shaw does have some decent ideas up his sleeve but they get pretty much drowned out in this mess of a production. As far as I can distinguish, his riffing and gutturals are decent enough for his chosen style. The guitar work is down tuned and simple but effective, while Shaw's vocals are of the pleasantly gurgling kind. The compositions seem to be of the kind that go for impact and don't rely on technicality too much. It's such a rotten shame that the good things about this release get totally lost in the utterly disastrous sound mix. In great part this is due to the programmed percussion. Bluntly put they sound like shit. They're all kick, and I can't make out any snare at all, making them a directionless cacophony of clicks and clacks. In all this the guitars sound separated from the rhythm tracks, making the songs fall apart at the seams with the vocals just stacked on top of it all. In its totality this album is just a mess of sounds that just seem to start and stop at random. At its worst moments you could compare it to a skipping CD with someone grunting over it while improvising on a guitar. Not even the cover of Putrid Pile's "Drenched in Gasoline" can save this.

There was much, much more that this could have been. The pummeling brutal death metal that Phalloplasty produces could pack an effective wallop, but due to its production it's just random sounds stacked on top of each other, making for a confusing and messy effort. It's for good reason that a few years later Zack reworked this album into the "Redux" version.

I have not heard any of Phalloplasty's following albums but taken into account that their name seems to have a following in the brutal death metal scene, I can only assume that they are of better quality than this debut. I'm giving this one a 5/10 for effort and those good ideas I could make out, but that's about it. So once again: my sincerest apologies, Zack.