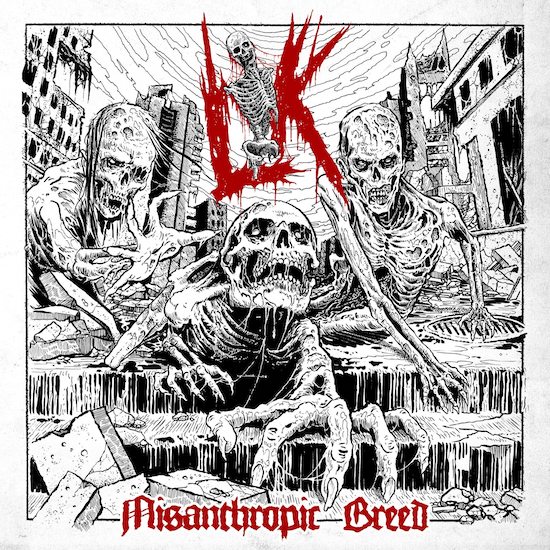 While there’s been a lot of talk about the surge of old school death metal revival bands in the US and Canada, not a lot of people have talked about the Swedish scene, and indeed the swedes have been at making quality death metal for a while now. From major acts like At The Gates and Amon Amarth, to cult bands like Repugnant and Kaamos back in the mid 2000’s, today we have a Stockholm outfit called Lik.

Lik (which is Swedish for corpse) while a fairly new band, have certainly been prolific and are comprised of veterans from the scene. While the Americans have been busy reviving the stylings and soundscapes of early 90’s US death metal, Lik have been going strong in bringing back the Stockholm sound from the late 80’s. Indeed, their chosen style of death metal is not the melodic death metal sound developed at Gothenburg, they’re Stockholm death metal in the purest sense. The now signature sound of HM-Boss distorted guitars, the dry snarling growls, a raw and minimalistic rhythm backbone in the bass and drums, and a clear influence of thrash and hardcore punk, alongside the aesthetics and atmosphere of gory Italian horror and slasher movies. The band proudly showcased this sound with their first two records. Their second album in particular was very aggressive and had a more defined classic swede death metal edge as opposed to the debut’s raw punk melodicism, which put the band in an interesting position as to what direction their next album would go; will they double down on the early Grave and Dismember worship, or will they experiment with D-beat? The band’s answer with Misanthropic Breed was “why not both?”.

Misanthropic Breed, released by Metal Blade Records, indeed sees the band bring back the subtle melodies and hooks of their first album as a complement to refine the sound they had on their second record, while also dialing the speed and aggression all the way up, making this their most technical and intense record so far. The album opens strong and the first two tracks 'The Weird' and 'Decay' do a good job in showcasing the band balancing their newfound technicality with their refined aggression and punk tendencies. This momentum is maintained throughout the album and what’s impressive is how the band manages to have the same level of “brutality” in the mid-tempo, D-beat styled tracks as they do in the faster classic death metal songs. As a whole the album is of a consistent quality and all the members have an equal amount of time to shine as an unit and individually, the guitars, bass, drums and vocals all complement each other beautifully. Furthermore, the guitar work of Nille Sandin and Tomas Åkvik are the main standouts and the backbone of each song are the riffs and solos. In tracks like 'Female Fatal to the Flesh' and the outstanding closing song 'Becoming' the guitars do the heavy lifting through said riffs and solos but more importantly, the guitars manage to add an extra flair to the music in the form of dark ambience. The album goes into unexpected atmospheric sections, like the two previously mentioned tracks.

Overall Lik succeeded in crafting a record with the best aspects of their previous albums alongside a newfound direction where they have ample room to experiment and branch out. That being said, the band’s major shortcoming is the flaw in all the bands from this “old school” renaissance, as in this is a death metal album and absolutely nothing else. Even with the new ideas and experiments, Misanthropic Breed doesn’t really leave its niche, and the band’s prerogative is in making death metal and work within that subgenre. There’s nothing wrong with that approach, and Lik are definitely one of the better bands in the Swedish side of the “OSDM” revivalists, but still, it is worth pointing out. Only time will tell if Lik can achieve the same level of reverence as bands like Entombed and Grave achieved in their heyday, or remain a worthy entry in the pantheon of cult bands like Repugnant.