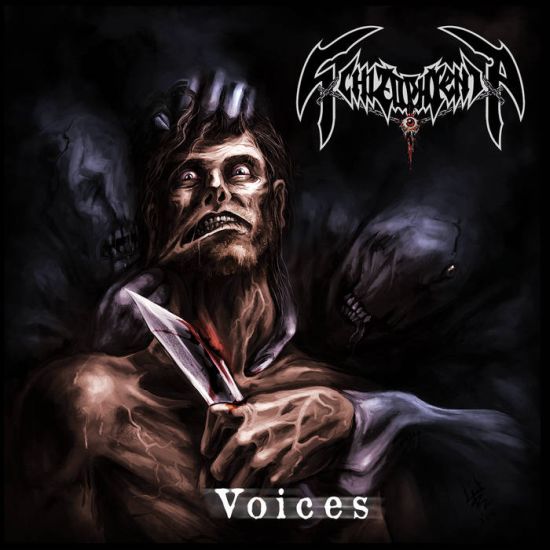 You like Demolition Hammer (also the "Time Bomb")? You love Sepultura's "Beneath the Remains"? Then the almost inexhaustible Belgian underground has spat out just the right thing for you with Schizophrenia. After Bütcher and Slaughter Messiah this is the third highlight of the Belgian death thrash metal 2020.

The album hits right on it and takes no prisoners. Groovy passages alternate with rough thrashing and hardly give the listener time to catch his breath. The singer rumbles through the tracks and sounds as angry as if all Belgian chocolates and fries in the country were sold out and there was only Belgian beer to drink. A pretty bad idea.

From the very beginning you get the feeling that you have been transported back in time. The songs sound like old school thrash at the end of the 80s or beginning of the 90s. The riffs remind me especially of the bands mentioned above, even though independent compositions are definitely recognizable. The voice of the singer has similarity to newer Protector albums. The guitars are played precisely and race through the songs and the drummer, who by the way also plays for Skelethal and Bütcher, thrashes his way through the EP's 20 minutes of playing time with all his might and cool blast beats and double bass. The band knows how to incorporate catchy parts and good melodies into their songs (as an example 'Perpetual Perdition' is mentioned here), but also to convince with tempo changes. Especially the opener 'Structure of Death' is a highlight of the album because of its cool arrangement, which is very reminiscent of Sepultura, also 'Mortal Sin' is another recommendable song because of its breaks and catchy melodies. Whereby it should be noted that there is also no song in the five tracks that I would call bad.

The production is also very successful. The sound is punchy, each instrument is clearly recognizable, the voice is clear and distinct. To my ears, nothing is overdriven or dully produced. There I have heard in recent times much worse produced albums (for example, "Summon the Hordes" by the already cited as a reference Protector). Thumbs up for this performance.

Unfortunately, Voices has only become an EP, because the songs should make everyone who likes old school death thrash definitely want more. I hope that the band will be back in the studio soon to record a regular longplayer that is on par with Voices. Until then, we all have to put up with the five tracks.

I seem to have misplaced my crystal ball, but as far as predictions go, I'm pretty sure about this one: 2020 is going to be a great year for extreme metal. New releases from decent folk like Violent Hammer, Devangelic and Perdition Temple are coming these next few months, while recent releases by Slaughter Messiah and Bütcher are already ragers of the highest order. Among these early comers is also this happy collective by the name of Schizophrenia with their very first release and it's one I've been waiting for, that's for sure.

Clocking in at 20 minutes, here we have a blast of explosive death/thrash that harks back to the late 80's and early 90's. Listening to this brings back memories of bands like Epidemic, Massacra, early No Return, Protector's "A Shedding of Skin" and especially Demolition Hammer. Aggressive riffing all around, raging solo's and gruff vocals all blend together in frantic songs that show enough variation to stay interesting even after the umpteenth listen. It's the kind of stuff that makes you want to demolish everything and everyone in sight! The person who steals the show however is drummer Lorenzo. Mo-ther-FUCK, this dude gives a utterly hammering performance, propelling the songs forward in a veritable hurricane of frenzied power. If you happen to see that guy walking around with a sledgehammer, take cover 'cuz shit's gonna get smashed! Best of all, this goodness is rolled into a crisp and powerful production that doesn't sound overproduced or plastic, the music still has the room to "breathe". I sure as hell can see myself playing this more than once. Extra mention goes out to the great artwork that gives this release the right feel, as if it was released in 1991.

There is one point I'm going to make though, and that is that the riffing really sounds a lot like Demolition Hammer, almost to the point of plagiarism sometimes. Opener 'Structure of Death' could have easily been a track on "Epidemic of Violence". Then again, complaining that a band sounds too much like Demolition Hammer is the same as whining that your girlfriend looks too much like Mia Khalifa, so you can consider this a very minor point.

Let me end this diatribe by saying that this is one hell of a banger that no fan of early 90's thrash/death can afford to miss! In this genre there are far worse bands out there that get more recognition than this lot does, so go for quality and pick this one up. Me, I'm hoping they will release a full length soon, can't wait to hear more of this.

It is a very rare occurrence when a band from seemingly out of nowhere manages to not only grab my attention, but dominate it for the better part of a few months. Belgium's Schizophrenia does just that with their debut EP, Voices.

Voices is a hook-filled, voracious death / thrash foray that is a fresh slap in the face to the respective genres and their fans who, while not necessarily looking for more, appreciate the finer points of both areas when designed so damn perfectly. These four guys from relative obscurity have crafted what I personally feel is best EP offering of the year, hands down. With a sharp and concise talon on the pulse of what makes for good death metal, Schizophrenia meshes the worlds of thrash and death to come up with 20-minutes of fury and hellish violence only a select few will understand and appreciate. I cannot espouse the virtues of this release enough; it's a perfect meshing of two worlds too often forced together with criminally bad results, despite the best intentions. With guitars that tap into every recess of the brain, bass and drums filling the back end with endless dissension, and vocals barking a sermon from the deepest portions of hell itself, Voices discovers the fountain of youth that de Leon himself couldn't have offered for these two genres too laden with underwhelming efforts these days.

As for the tracks, one flows into another with such symmetry and design that one wonders how it could have possibly worked out so well so easily. The vocals are the raspy growl / shriek we've all come to know and revel in, but something about these offerings over such a volatile cacophony creates intense visuals on both horrific and engaging palates. The production being crisp and very unpolished in its polish just makes the entire sonic experience fun with every instrument holding its own with veritable ease and precision. This right here is the metal genre marriage we need and want, people - from the mind-jarring cover to the impeccable tunes themselves, this is a flawless winner.

Standouts? The entire damn thing! But, if forced at gunpoint, I keep going back to 'Schizophrenia', a track with such a tremendous, albeit simple bridge hook that the tone sticks in my head for hours. Truthfully, though , if you seek out on EP this year, this band is making some serious noise. I managed to snag a copy from the band themselves, but Redefining Darkness has put out limited, numbered editions of the CD and LP (purple swirl and blood red) in numbers of 250 vinyl and 200 CD's. DO NOT sleep on this one, or cry later.

I usually don't fall too in love with a band or a particular release these days, despite there being a plethora of amazing albums being issued in seemingly record time this summer, but this is destined to be one of those sleepers that people in the local shows are going to be raving about for months to come, mark my words.