Belgian newcomers Schizophrenia released their first EP "Voices" about two years ago and were quite a surprise in the death/thrash scene. Now they finally have released their first full-length album "Recollections Of The Insane" and got much more brutal on this output. I had the chance to do a Skype interview (sorry that it took so long!) with Ricky (voc/bass), Romeo (git) and Marty (git) so that you have the chance to get to know this very likable band. 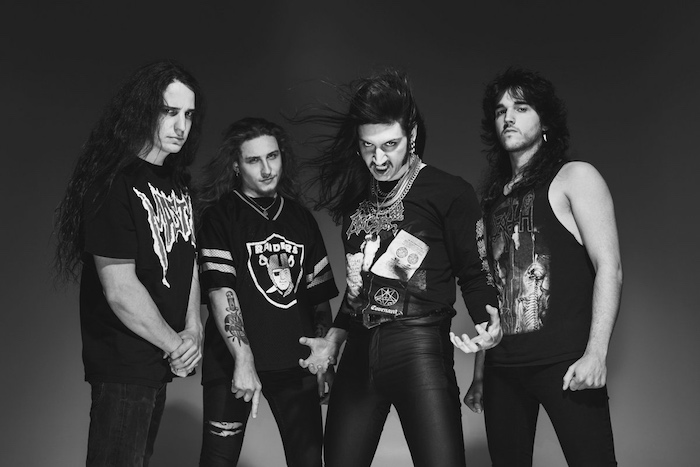 First of all, can you introduce the band a little bit to our readers?

Ricky: So, I am Ricky on the vocals and next to me are Marty and Romeo on the guitars. Our drummer is not here. Our band started in late 2016 / early 2017. Me and Romeo played in a band before but it disbanded and we thought of doing something different, to bring the music to another level. We wanted to go a bit more extreme and at that time we were living together and shared an apartment so we had a lot of time to jam together. Then we asked Marty and Lorenzo to join the band and they immediately accepted. Romeo and I had already written the main structure of the songs that are on the EP (Voices; M.). So we just put the pieces together and did some arrangements and stuff like that and recorded the EP at the end of 2018. It was released in January 2020 because we had a lot of troubles with it (laughs).

You released your first full-length album "Recollections Of The Insane" some time ago. Were you a little bit nervous about the feedback from the fans?

Ricky: Not very nervous, I was really excited actually.

Romeo: We're all very happy that we finally share what we've been working on so hard. We are all very satisfied with the record and with the road we've taken. On this album the death metal element is more dominant and for the EP we were very much like "okay, we're gonna do it this way, like thrash-death" and for this album we didn't have any boundaries. We just came up with a lot of ideas, we kept what we liked and it the direction was very natural and way more extreme and we just liked it. We thought it was cool and we played with a lot of different things which was a lot of fun to do. We're really happy with the result.

Marty: I think when you look at it a little bit more specifically, a lot of the songs have more melody in them than the songs on Voices and we also experimented with the way we composed them. We tried to kind of break away from the usual structures we have, like we didn't want to have a formula, maybe it's a harsh word for that, but we tried to take a different approach on composition and melody in general.

Ricky: Yeah, I think for Voices we had a sort of formula for the song structures. I mean, it definitely worked because we had great feedback for it. But we didn't wanna do a "Voices II". So we went for that different approach and of course it's different and it was very challenging but we didn't have any boundaries, we just went for it.

What do you think is the biggest difference to the EP "Voices"?

Ricky: I think we gave the music a more extreme touch. The EP had more thrash influences and the album has more death metal influences but still has elements of both.

Having a look at the titles and the cover, I have the impression that you deal with some old mystic stuff. Am I right about that?

Ricky: The album cover is about that and it really pictures what the song 'Monolith' is about. It's kind of metaphoric. But if you read the lyrics, it is about that statue that evokes all evil and madness and there is someone kneeling in front of it in sign of submission. It's dealing with a lot of struggles and the album title Recollections Of The Insane is like putting someone in front of something bigger than him. It's very hard to explain but it's a bit like facing all these catastrophic and bad things. I think the album has different shades like each song has its own personality. It has some dramatic moments and some others that are more brutal and gory. I thought that the statue itself is a very powerful image – it's a bit eerie and very mysterious.

Yes, it's a very good one. Who painted it?

After the success of "Voices", I guess that there would have been a lot of labels who had liked to sign you (at least Andreas from Metal Blade told me so). Why do you still release your albums on your own?

Ricky: We had a lot of offers and Metal Blade is one of the labels that sent us one. The thing is that for Voices we tried it ourselves and it went really well and so we thought like "okay we can look for options like other labels" and they made their offers and they were very good but we decided to take the risk and do it again on our own. But we licensed some labels to sell our records like Redefining Darkness is doing the distribution in North America and we also sold some copies to Metal Blade, Napalm Records and Workrecords in Japan and Brazil as well, so eventually we got our distribution taken care of.

Which bands are the most influential ones for Schizophrenia?

All: That's a hard question!

Ricky: Well, for me as a singer, it's Slayer, Morbid Angel and Obituary. They were very big influences at least for this record. I took a lot from that.

Romeo: Well, for me it's Dissection but it's too much to mention. We take the influence from everything we like and we don't just pick three bands where we say that we have to sound that way. We love so much music, even outside the metal genre, Marty listens to some fusion stuff as well and we try to incorporate everything and when we write it comes out in our own way.

Marty: I think in a general sense you could say that the old-school death and some of the more heavy thrash metal bands are big influences but I also think that we have an influence on each other and when we meet to write we're kind of complementary to each other. We just created together in the end and not think about influences that much. It's what comes up in us and Romeo comes up with an idea and I have something that might fit with it and we just take it from there. 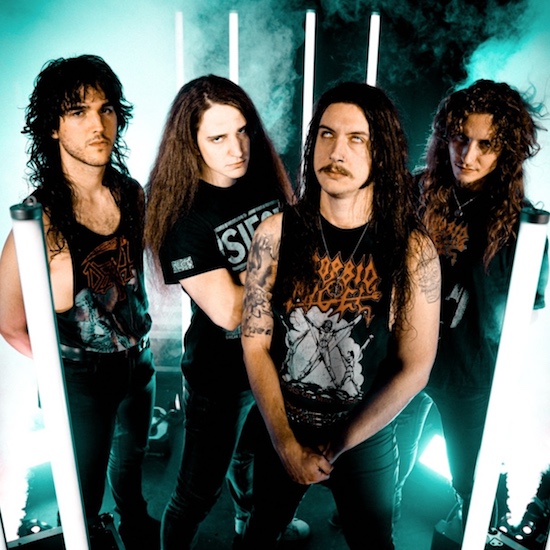 Until 2016 you called the band Hämmerhead. Why did you change into Schizophrenia? Was it because you wanted to create some heavier music?

Ricky: It was another band. It was active since 2010, I guess and then me and Romeo joined the band in 2015 and we stayed in for 1 ½ years but we never recorded anything with it. They had a couple of EPs already and we just did live shows. Then the drummer joined Carnation and the other guitarist just quite everything. So Romeo and I decided to come up with another name and new music. I mean, we didn't keep anything of that band so it's a totally different band.

What are the upcoming plans for Schizophrenia?

Ricky: There will be some shows between April until October or November in Europe.

Finally, a tough question – what are your personal top 5 records you don't want to live without?

Romeo: Oh man, this is too hard for me. Definitely "Covenant" by Morbid Angel, that's one of my favorites. "Screaming For Vengeance" by Judas Priest, "Storm Of The Light's Bane" by Dissection….I can't choose, I have so many albums rushing through my head.

Ricky: I'd say "The Number Of The Beast" by Maiden, "Live And Dangerous" by Thin Lizzy, "Reign In Blood", "Force It" by UFO and "Defenders Of The Faith" by Judas Priest.

Do you have some final words for the MetalBite community?

Ricky: I hope you will like our record and come to see us whenever we are in Germany or wherever. We're really looking forward to meeting all our fans at a live show and thanks to you for taking the time to do this – it was a lot of fun!