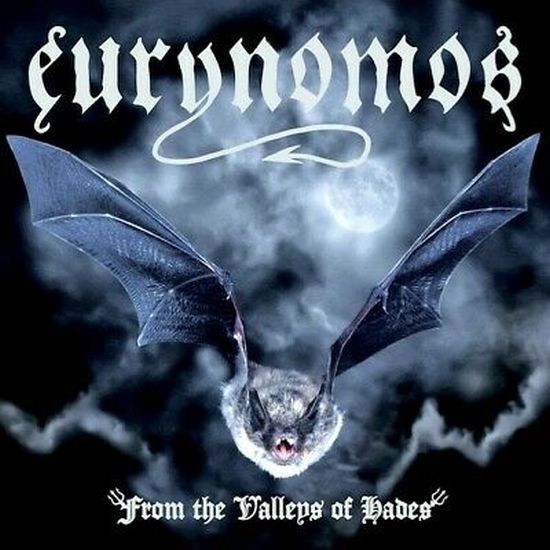 No waiting, no intro: Eurynomos start their first wild ride over the distance of an entire album immediately. The opening riff of 'Titan God' reveals two things very quickly. Firstly, the band saw no reason to change its approach. Musty black thrash is still the name of the game and that’s great. Secondly, the riffing of the opener is doubtlessly outstanding, but simultaneously nearly painfully similar to that of 'Unchained from the Crypts'. Of course, the musical frame of the band’s preferred approach is narrow. Nevertheless or maybe exactly because of this fact, the dudes should always keep a close look at their own back catalogue. Anyway, let me tell you the whole truth. Apart from the aforementioned blemish, 'Titan God' is an excellent beginning: straight, dark and malicious. That’s the way I like an album to be kicked off.

More songs follow the pattern of the first track, fortunately without referring too much on a previously already released song. For example, the brilliantly flowing and double bass-affine 'Bat Flight' points in the same direction and salutes the cover animal. By the way, the artwork reminds me of the long forgotten Noisehunter albums, but this does not indicate the music on From the Valleys of Hades in any way. Useless memories aside, let’s stay in the here and now. The murderous 'Nighthunter' takes a pretty straight way to hell as well, although mid-tempo parts show up, too. But I should mention that Eurynomos have more than only one song pattern up their sleeve. 'Pantokrator', for example, follows a more dragging approach. I wish it would have a bit more drive, but it's riffing is fantastic and conveys a relentless yet fatalistic feeling. Not to mention the catchiness of the chorus. That’s almost a trademark of the Germans, they are always aware of the relevance of a memorable chorus. This makes it easy to get quick access to the album, even for simple-minded dudes like me.

Magma is the name of the man who is responsible for “pyroclastic bass eruptions”, but that’s not all. He has mixed and mastered the album as well. Imagine the cry of a chained prisoner that comes out of the clammy cellar of a dilapidated castle and you get an idea how the full-length sounds. Okay, the prisoner is still surprisingly vigorous… In other words: From the Valleys of Hades sounds like a declaration of war against all kinds of modern productions and this is the perfect approach in view of the equally totally old-fashioned musical offering. But don’t confuse “old-fashioned” with “stale” or “outdated”. There is a never-changing, wicked core in metal and everybody who makes this core audible can be considered as a creator of timeless metal – and so old-fashioned is just a synonym for timeless in this context.

With the exception of the somewhat expressionless instrumental at the end of the A side, all songs have an enormous impact and therefore there is only one thing that annoys me. Two tracks which are listed on M-A (and which seem to be included on the CD version) are missing here. Maybe this is because of the sound possibilities and the capacity of a vinyl, however, I am against any form of discrimination of vinyl buyers. Isn’t this a violation of the UN Human Rights Charter? Of the Geneva Conventions? Of the proper worship of Kim Jong-un? Or of all together? Anyway, nine direct hits shape a fantastic record and the pretty large-sized title track bundles the strengths of Eurynomos for the final time: dynamic meets gargantuan riffs, evil melodies liaise with hellish outbursts of anger and Okkulto’s voice thrones above all. His former band Desaster will have to struggle in order to keep the pace of his present formation (and the split with Decayed rather indicates that Infernal Kuschke is fighting a losing battle, although I am sure that there is still a lot of musical power in Desaster). Be that as it may, the famous last words are dedicated to the here reviewed output. I admit: the more often I listen to 'Titan God', the less I care about its 'Unchained from the Crypt' similarity. It’s simply a neckbreaking killer – and the same goes for the entire vinyl.

Post scriptum, 17th of October: meanwhile, an occult person who originates from the valleys of Hades sent me a copy of the CD. The relatively pompous intro 'Call of the Arena' lives up to its name and carries the listener back to ancient Rome where the gladiators are entering Circus Maximus. 'Nibiru Sun' is a stomping fiendishness, short but crisp. So it’s up to you whether you choose the vinyl or the CD – I am sure both will enrich your collection. And thanks to the friendly dude who gave me the CD.