German black thrashers Eurynomos are still more an insider's tip in the scene but they already released three EPs and one full length album. Stylistically similar to old Desaster releases (no surprise here because their former frontman Okkulto was the singer in the beginning of the band) but also very unique. My thoughts were that the band has got to be spotlighted on MetalBite, so I asked guitarist Aethon if the band was interested in an interview and got the response promptly. Thanks a lot for that – I hope that you will enjoy the interview! 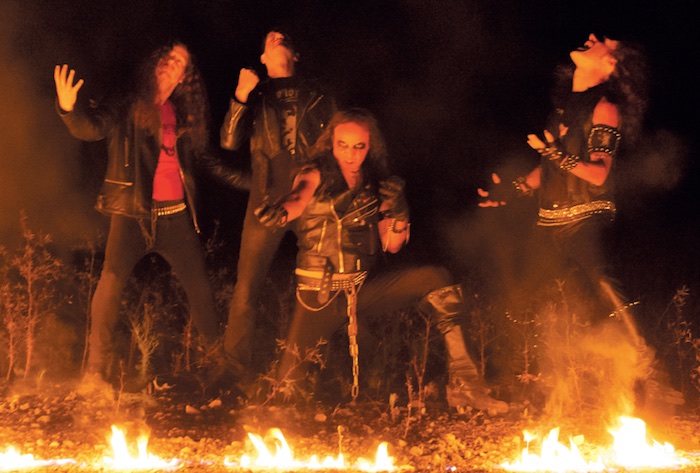 Hi Aethon, how are you doing? It's a little bit more than one year ago since you've released your first full-length album "From The Valley Of Hades". Are you content with the reactions from the media and the fans?

Hails Michael. All ok here in my metallic fortress, hope you are doing fine as well. Yes, From The Valleys Of Hades now has its first anniversary. So far, we are content with the reactions from the fans and also the media didn't seem to hate it. It is great to see the support from maniacs from around the globe. Right now, the American cassette version of the album is out, released on MORBID METAL RECORDS from Texas, and especially Latin American headbangers seem to be mad about it which really is great, I love their hot-blooded enthusiasm and passion for real metal mayhem.

Lyrically you deal a lot with ancient Greek mysteries. Is it because of your Greek origin?

Well, maybe a little bit, but both Okkulto and I are into ancient history and mythology. The lyrics for example for 'Heraklion Axes' are written by Okkulto, not by me. I think that the old European history is full of great stories and magic. We find it very inspiring. And it is not only Greek history… 'Hypogeum's Gate' and 'Eye Of The Pantheon' dealt with Roman history. And 'Druid Circle' for instance is a song about a very old place not far from Koblenz/ Germany. 'Banshee Calling' also deals with a story from our local area.

Nowadays there are a lot of bands singing about these topics; the latest releases that are about Greek mystery that I remember are Nekromantheon, Temple of Dread and Wode. Why do you think that is, do you have an explanation?

Perhaps they find it as inspiring as we do, not sure. Don't forget that the name EURYNOMOS is coming from Greek mythology as well.

What do you think when people from Northern or Middle Europe sing about those things that aren't originally their own cultural heritage?

I think everybody should sing about whatever he likes. I mean, you can be an American band like Nile or After Death and sing about Egyptian history, why not? Merciful Fate did the same and they are Danish. And remember Iron Maiden's "Powerslave" album. And MSG has made a song about the Japanese Samurai. That's all fine. But to pretend to be somebody else can be strange. I remember in the 90s black metal age that lots of bands from around the world tried not only to sound like a Norse band but also use Norse names and stuff, they pretended to be like a Scandinavian band…. that was really like "what the fuck?".

Before the release of "From The Valley Of Hades" you've recorded three demos in 2015 and 2016 which you re-released as a CD in 2016. What was the reason for that? When I think of Desaster – they still haven't released their two demos as a CD (what they definitely should do…).

Those were not demos but 7"inch EP releases. We never made classic demo tapes. But that was a different time of course compared to Desaster's early days. They did their demos in the 90s and it was pretty common back then. Our three 7"EP sold out pretty quick and we didn't want to see a bootleg CD of it one day which would have happened for sure if we didn't release the CD officially. And who knows how it would have looked like… maybe with an old Desaster photo on it haha. We wanted to release it as a quality release with a nice booklet, exclusive photos, lyrics, etc. etc. so that the maniacs have true value for their money. About Desaster's demos, they have released them on LP and also on MC versions as far as I remember.

Speaking of Desaster, your singer Okkulto is the former singer of them. How is the relationship between both bands? Infernal K. told me lately that he really liked your new album.

We have a great relationship; we are old metal friends and brothers. Okkulto left the band about 20 years ago, so that's really long ago and it was his personal decision. Time healed all wounds. No bad blood here. We treat each other with big respect. Desaster are around for a very long time and have managed to do lots of great albums and they never wimped out or changed their style. I think this is a great achievement.

Musically you are definitely influenced by Celtic Frost. Which other musical sources of inspiration can you mention?

Interesting you say this because I personally am not really inspired by Celtic Frost, maybe more by Hellhammer. I think I know what you mean, it is the open power chord kind of riffing here and then and the touches of doom. Well, the influences are easy, it is mostly the first generation of black/heavy/speed metal bands of the 80s. This is the music that shaped us, the music of our youth, when metal symbolized rebellion. And we wanted to re-create that vibe with our music, the restless, raw, wild and heavy sound of our teenager days, when bands were still hungry and ready to push the boundaries. 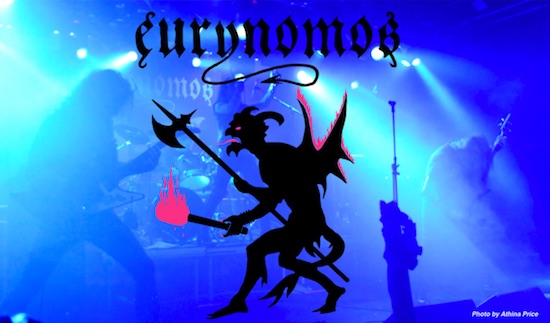 Everybody is fed up with that shit, but it is still concerning everyone more or less in this world – Covid. Do you have any plans for the next months? Any concerts or festivals (though most here in Germany will be probably cancelled)?

Covid caused a lot of damage to society. No gigs for me in 2021 with all those limitations, not as a visitor and not as a band. Everybody or nobody should be able to see a show, it's all or nothing. I don't like to play only for a selected crowd, I think that's not fair, and we don't want anybody to be excluded. So, no live gigs for us, even if it is bitter to have an album out and not being able to promote it live… But it is as it is. Instead, I am swinging the axe now to create new songs for a new release. The good always comes with the bad.

You are not only the guitarist in Eurynomos but also in Megathérion. Do you have some good news about your other band? Your only release, the self-titled EP is already three years old….

Yes, MEGATHÉRION are still active although the lockdowns made it difficult to function, it was mostly only the drummer Summanus and myself who kept rehearsing, we have not seen our vocalist for almost one year. Fortunately, he is still alive and finally showed up three weeks ago. We are a three-piece band at the moment, our bass player deserted in Spring 2020. The album is written, and I hope we'll start recording pretty soon. Expect nothing but a heavy and intense crusher. The mini album was only a forewarning, the album will be the real deal. It will be called "Archaic Thunder" which I think perfectly describes our sound… thunderous and archaic in style.

If you could plan a concert, which bands would take part (still active or split-up)?

Puuuh, difficult one. Most of my fave bands already passed their zenith. Well, if you can put me into a time machine, I would pick SLAYER 1983 (Woodstock set list and look), VENOM 1984, DEATH ROW (US) in 1983 and IRON MAIDEN with Paul DiAnno as the headliner, hehe.

What are the most important records in your life?

Finally, the last words belong to you! Thanks a lot for the interview.

Thanks a lot for inviting us into your realm. It was an honor doing this interview for MetalBite. Those who like it the traditional, dark, raw, loud and heavy way, check out EURYNOMOS. Cheers for your support Michael.
www.facebook.com/eurynomosofficial, www.eurynomos.com