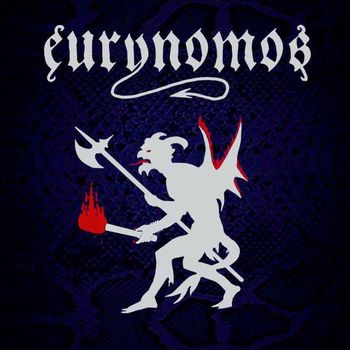 Okkulto is back! My wife and my children are not amused at all. Since they saw him on TV, they hate him. (You have to know that I am a proud owner of the Desaster DVD "Desasterous Meeting"). But I do not care. I like his attitude. Without exception, he performed very well on the early outputs of the German black thrash institution. Therefore, it is good to know that he has returned after a long period of personnel reorientation. Better still, this EP is the first of a trilogy. But what does the here presented vinyl offer? Let us hear what the advertising claims. "Unchained from the crypts of Hades comes forth a metallic beast". Well, I really hate these trite slogans. I would use a much more fitting wording in order to describe this debut. I would say: "Unchained from the crypts of Hades comes forth a metallic beast". This is exactly the same? I am sorry about that, but these words really describe the four pieces in the best possible way.

Eurynomos does not score with unique features or innovative thoughts. The guys do not even try to hide their disinterest in previously unknown sounds. Instead, they brew a dark and poisonous mixture of blackened thrash metal while adding some mystic elements. Okkulto and Nimetön, the first drummer of Desaster, cannot renounce their musical roots. The four songs sound like early recordings of titanic bands such as Ketzer, Cruel Force or, of course, Desaster. In other words, Eurynomos combines the proven means of the subgenre in order to leave a lasting impression. Funeral bells and howling wind open the album. As soon as the guitar sets in, the band celebrates the triumph of evil. To put it less dramatically, the band presents galloping guitars, sharp (and simple) riffs and a small number of vile melodies. They are supported by an efficient rhythm section and crowned by the imperious voice of Okkulto. His raw vocals underline the intention of the band to become a serious challenger of Germany's leading black thrash metal commanders.

In particular due to the unpolished underground sound, the vinyl spreads a mouldy smell. Broadly speaking, its visual design does not lie in close proximity to that of the outputs of Okkulto's former group, but the atmospheric background image of the enclosed text sheet builds a bridge to his past. The lyrics are aligned with the general lyrical content of the subgenre. The band delivers what the listeners expect. Nevertheless, the four-piece scores with a surprising detail. It is amazing to realise that the guys are able to create catchy choruses without hurting the underground aura of the songs. The close intertwining of rawness and accessibility has yet to meet its match. No matter whether you listen to 'Banshee Calling' or 'Witchryder', both songs possess a chorus that you will keep in mind for a long time. What is more, 'Banshee Calling' with its tribal drums at the beginning reminds me a bit of Venom's "Domus Mundi", while the straight 'Witchryder' appears as a close relative of Desaster's "Sacrilege". Irrespective of this, both tracks stand on their own feet. The A side with the straightforward intro and the fast-paced title track does not pale in comparison with the songs of the B side.

All in all, for those of you who get euphoric while listening to compact, raw and pure metal songs that do not lack power, straightness and atmosphere, the debut of Eurynomos will enrich your life. The conclusive overall concept is impressive. Instead of preserving the ashes, the guys keep the flame burning. Regardless of this situation, sound fetishists will hardly be able to enjoy the music. Quite the contrary, they will feel a spontaneous urge to leave the room. Worshippers of a technical, progressive or complex approach should also stay away from Unchained from the Crypt. Unfortunately, the same applies for my wife and our children.