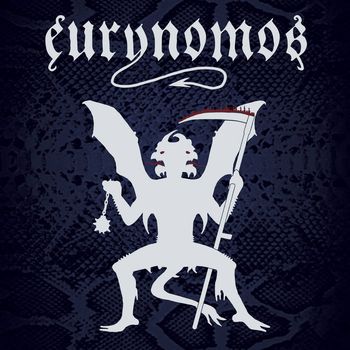 The name speaks for itself. The Trilogy bundles the three 7" of the rising force of the German underground. Only the last song is a new one (and those who bought the EPs are able to download it for free). In my humble opinion, Eurynomos have delivered the songs that Iron Angel forgot to record after their intriguing debut. Instead, they delivered an almost lukewarm successor, but that's another story. Anyway, just like Iron Angel on their first album, Eurynomos combine black and thrash metal in a perfect manner. Moreover, the atmosphere of their songs is more malicious than the aura of "Legions of Evil", the lyrics are more original and the fundamental naivety of the early German (black) thrash scene is missing. Frankly speaking, Eurynomos kicks ass.

I have tried to describe the three archaic, tradition-conscious vinyls profoundly and therefore I just want to add some short information. It is too early to say that the EPs have already withstood the test of time. Yet up to now, these singles have nothing lost of their fascination. Okay, maybe I was too enthusiastic concerning Eye of the Pantheon, but I underrated Unchained from the Crypt, Fierce Alliance has grown with every new spin and at the end of the day it does not matter at all. Galloping guitars, dirty guitars, high speed guitars, abrasive guitars, the man at the six strings delivers the whole spectrum. Okkulto is probably one of the most charismatic singers of the worldwide underground and the rhythm section plays precisely and tightly. Not to mention that the band varies the tempo very cleverly. Dynamic and liveliness are omnipresent. And that's not all. The booklet delivers all lyrics and a great design, the sound quality is excellent for this kind of metal. Don't ask me whether the CD or the vinyls sound better - both enthuse me, first and foremost because of the brilliant music. Anyway, The Trilogy relies on a powerful, voluminous sound which does not lack pressure and atmosphere.

The new song closes the album. 'Gone Down in Flames' blends seamlessly with the "classics" of the horde. Dense drumming and aggressive riffing kick off the track which, fortunately, does not show previously unknown facets of the band's art. This is not an outtake, the mid-paced jawbreaker oozes the ideology of the black thrash underground each and every second. Thus, it is on a par with the most songs of the EPs and I have no doubts that Eurynomos have still a lot to say when taking a look at this new piece. Admittedly, maybe I am a little bit biased due to a brief e-mail contact with the band and therefore one might feel free to reduce my assessment. Anyway, there exists so much exciting music that I would not listen to Eurynomos without having a very good reason for doing so.

For those pitiful creatures who have not dived into the formation's fathomless cosmos so far, I recommend to listen to the atmospheric and eerie 'Banshee Calling', the mercilessly driving 'Eurynomos' with its morbid beginning or the majestic 'Ferropolis (City of Iron)'. But these recommendations are only valid for the braggers in the VIP area with a really busy schedule or for those jesters who think they have better things to do (what the hell could that be?). Insiders know that it is very well invested time to listen to the entire work.