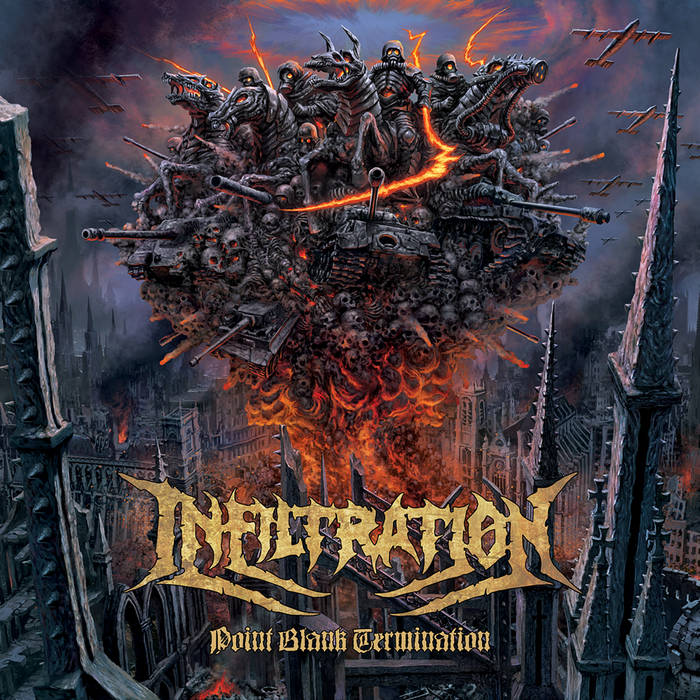 Russia to the rescue!, well not quite, considering this is death metal. Infiltration take up the challenge of steering this already fuckety fuck of a year further down the path to total annihilation with their debut Point Blank Termination. Take a look at the name, then take into account it's only 31 minutes, nuff said? Those that are not new to the genre - would understand, but to fresh meat, prepare for a good old fashioned clobbering, thrashing death metal style. Brutal blast beats, pummeling double bass trade-off ferocity with decimating riffs and vocals; you dare play roulette with Point Blank Termination? The four butchers of Infiltration take a somewhat clean production and just smear it in the entrails of late 90s, overflowing with cruel-chug chord structures that dissolve into some fascinating classic death metal riffing.

This record concentrates on aggression whether it be in the mid paced chugging moments of 'Radiation Storm' or the fast pelting knuckles of 'Rabid Bloodshed', either way you get what is expected of a such a short album from a death metal band, total fucking obliteration. It’s not all aggression however, Infiltrate take time in applying the necessary curves as to ensure each entry has something that it may sport as an exclusive feature. This is where the guitars and drumming shine; get blasted in the face by the blizzard of blast-beats or those amputating pinch harmonics and stomping solos heard on songs such as 'Plunged Into Decimation' and the aptly titled 'Collateral Damage'. These songs take a fucking chunk out the arse of brutality, chew it up and spit it back at you with their own coating of Russian vitriol.

I admire Infiltration's respect for time in a sense they don't overdo things by creating a 45 minute album that puts the listener to sleep by the 20 minute mark; as implied recently, the songs have their own personalities and are played tightly thus the material is perceived as refreshing with each listen despite the genre being nothing new. And that is what you want form a record this sort, nothing too over the top but at the same time, nothing that is underwhelming. On their debut, Point Blank Termination, Infiltration demonstrate the ability to create something that's been in the fallout one too may times and somewhat apply a refreshing sheen to its deteriorating frame. Be on the lookout for more works of woe by this new Russian pact, for now let the punishing sounds of 'Plunged Into Decimation', and 'Missing In Bodycount' hum with ravaging fury in your ears.