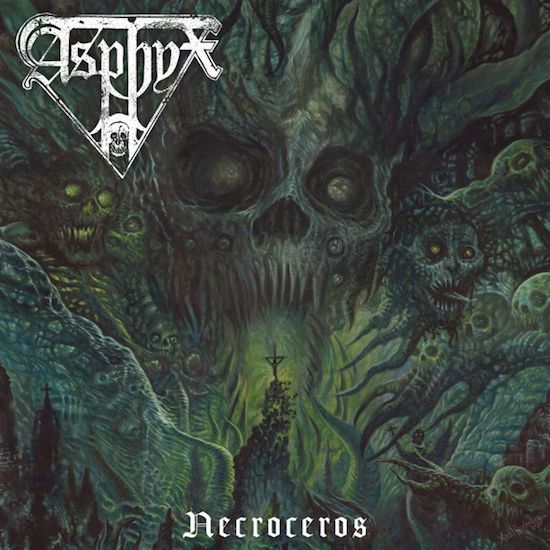 I apologize, this is probably the worst sentence in order to start a review. Let me begin again.

In football, there exists a great rivalry between Holland and Germany that started in 1974, but in metal, Dutch and Teutons are quite close. (Not much better, I admit.) Anyway, Asphyx is known to have a German compatriot smashing the drum set. Unfortunately, and this brings me immediately to my main criticism of Necroceros, this happens comparatively rarely on the new album. The deathhammer gives itself a break. For me, Asphyx have slowed down the tempo a bit too often and that's not enough. They also put the longest song, which is simultaneously one of the lamest and weakest, in the centre of the track list. It is a pity about the good, anti-Maoist lyrics of 'Three Years of Famine', but the piece breaks the flow of the album. Ironically, van Drunen said in an interview that he sometimes skips this song. I think I agree with that, although of course he didn't justify it with the lack of class of the title. Fortunately, there are also some very well-executed tracks.

Just take 'Molten Black Earth' with its Bolt Thrower riffing and groove. Of course you know the typical, tragic sounding riffs of the British legend. They deliver the perfect background music for a film scene in which a once proud warship slowly sinks into the deadly waters. 'Knights Templar Stand' is also pretty cool due to its double bass driven parts in the centre of the song and the casual and catchy main riff, which is somehow airy and heavy at the same time. Yet I have to say that I miss an adequate amount of tracks like 'Botox Implosion'. It relies on the speedy, murderous formula that already made songs like 'Deathhammer' or 'Wildland Fire' that great. This implosion marks a very nice explosion, but on 'Necroceros', it almost stands alone. The dominance of slow or medium-fast rhythms robs the album of some percent of its impulsiveness. In the past, you could count on the shorter songs to be deadly neckbreakers, sheer outbursts of hellish energy. Today, the relatively short 'The Nameless Elite' has a fast-paced section, but its average speed would not cause a stir on any German autobahn.

Yes, it’s true: with the focus on doomy tracks, Necroceros does not overflow with spontaneity. Aggravating the situation, 'In Blazing Oceans' extends the album without reinforcing it and 'Yield or Die' suffers from an underdeveloped individuality. The closing title track also does not deliver pure excitement. Yet it is a solid slow-moving song with insistent guitar lines that represents a full-length full of dragging cuts (and good, partly original lyrics) in an appropriate manner. Incidentally, it goes without saying that the production is flawless, Asphyx sound as they always have sounded since their comeback in 2009: voluminous, brute and relentless. Thus, the album is not disappointing, I’m happy that Asphyx is alive and healthy. But the long-players of their “death trilogy” from the years 2009, 2012 and 2016 were better and I guess a lot of fans with an affinity for high velocity will agree.

Anything left to say? Yes – I am completely convinced that back in 1974 the Dutch team with King Johan lost the final of the World Championship rightfully. And I am absolutely not biased on this issue… hahaha, kleiner Witz, sorry, little joke.

There is a reason to celebrate. The Dutch demolition company Asphyx, by now a Dutch-German cooperation, since Stefan "Husky" Hüskens (formerly Decayed, Desaster and Sodom) has been sitting behind the drums for two albums now, releases their tenth album. And it is the first album that has the same line-up as the previous album has recorded. What does that mean musically? Stagnation or progress (whereas stagnation is not necessarily a bad thing musically in my eyes)?

First Asphyx starts with a usual fast song ('The Sole Cure is Death'), which grooves pretty cool and goes straight into your blood. The second song 'Molten Black Earth' is also quite a banger, which reminds of Bolt Thrower in places and, how fitting, also revolves around the topic of war. Strong beginning up to here. With 'Mount Skull' Aspyhx goes down a gear and moved more in the death-doom area, to then become a bit faster and catchier again in the next track. With 'Three Years of Famine' Asphyx have composed a track that is rather unusual in their biography, because it is very melodic in parts and has an interesting acoustic part. The beginning reminds me quite a bit of 'Skullcrusher' by Overkill. The song is a slow, crawling track that lives from its intensity. Lyrically, it deals with the famines in China in the middle of the last century, which cost the lives of many millions of people. Let's see if the new Asphyx will make it to the Middle Kingdom with this song on it. The following tracks are a mixture of faster and slower songs, with 'In Blazing Oceans' coming across as a bit uninspired and boring. The other songs on the other hand know how to please, because they sound much more varied and catchy. Particularly noteworthy would be 'Yield or Die', a fast, stomping song, which is also very melodic and the title track, which develops from a slow crawling track to a mid-tempo bang-your-head song and maintains the tension until the end.

Production-wise there is nothing to complain about at all, the drums sound clean and punchy, the guitars as well and Martin's voice rattles as always. Also the cover is very nicely designed, like the last time by Axel Hermann. It reflects the dark atmosphere of the album well and has many interesting aspects to discover.

I asked at the beginning whether stagnation or progressiveness prevails on Necroceros - well, in a certain way Asphyx have developed further especially on 'Three Years of Famine', otherwise they have remained stylistically very true to themselves, which is also good. Personally, I find the band particularly convincing when they pick up the pace, so for me there are one or two tracks on the album that don't really sweep me off my feet, but that's very subjective.

All in all, a very solid tenth album, which could happily be followed by ten (or more) more. Gefeliciteerd and Herzlichen Glückwunsch, Asphyx!!!