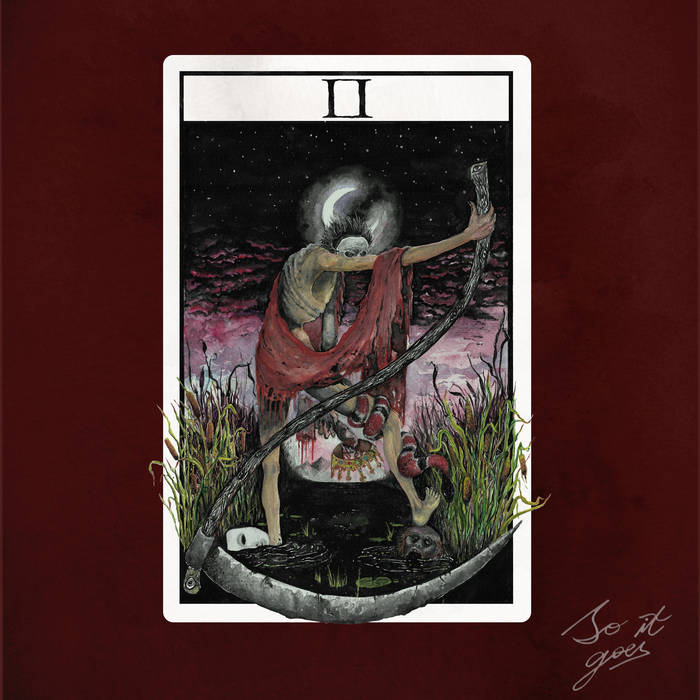 The Chilean Demoniac will release their now second album but I must say that I have not heard anything from them before. Also I must state that this is quite a flaw on my part, which is now fortunately fixed.

The cover shows a tarot card, on which the reaper can be seen in a swamp illuminated by the moon. A quite successful and also quite original artwork, I think. Musically Demoniac beats the inclined listener directly with a merciless pinch of old-school thrash in the style of old Merciless or Kreator around the ears. Pretty strong. However, in the course of the first track 'RSV - Fools Coincidence - Testigo' (but also in the other tracks of the CD) you will be quite surprised, because the band often switches from English to their native language Spanish, which sounds pretty cool. In addition, they incorporate passages in the middle of their songs that are already very reminiscent of classical compositions. Not bad, it doesn't always have to be in your face. The band uses not only the usual thrash metal instruments, but also piano or saxophone and what they really manage to do convincingly almost consistently is to mix aggressive parts with quieter, more classical interludes, so that it has become a very independent album. However, and this is my subjective opinion, at least the piece 'Extraviado' as well as the saxophone sounds in 'So it Goes', the 20-minute title track, which comes along compositionally very multifaceted, could have been saved by not using the sax. But this is probably due to my dislike for Lisa Simpson and the associated hatred of saxophones, in my eyes the worst instrument in the world.

The guys succeeded with So it Goes a pretty strong album that I will probably listen to more often, because it is much more varied than a lot of other thrash albums. If only there would not be the saxophone.....