In October last year, the Chileans Demoniac released their new album "So It Goes". A pretty strong piece, which mixes many classic thrash elements with some unconventional stylistic devices, such as a clarinet or even borrowings from classical music. Also, the change between English and Spanish in the lyrics is something that is rather unusual. It's time to get to know this interesting band a bit better, so I asked Vicente Pereira, the band's bass player, to answer some questions for MetalBite. Thanks again for the detailed answers on my part!!! 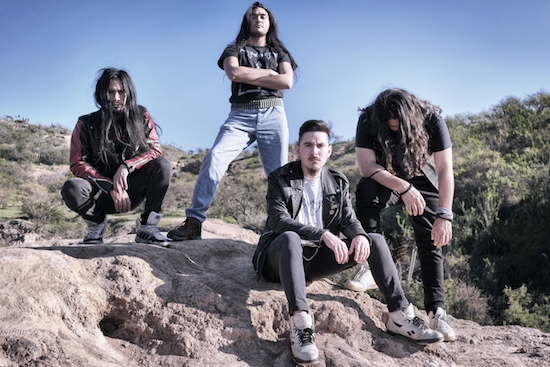 First of all, congratulations to your new album. Quite a wrecking ball, I think!!! Since your band (at least to me) was not known until now, could you introduce yourself a little bit to our readers?

We are a fast and violent thrash metal band created in 2011 in the town of Limache (Chile), land of ancient witches. In 2012, we released our first EP Judgement Of Death, a vicious thrash metal EP, however with a very distant sound of what we do today. In 2014, we released The Unacceptable Truth demo and with this work, we would start to find our own sound. In 2017 we released our LP debut called Intemperance, which was edited by the German label Witches Brew, a year later the album would be re-edited in cassette format by the Chilean label Dissonant Death. This album had a very good reception and reviews, which would allow us to play in different parts of Chile and opening shows for bands like Violator (Brazil). This year we released our first live album, a live record from a gig with bands like Ripper, Dekapited and Evil Madness, simply called En Vivo 28.09.19 and recently we released our second album So It Goes which I think it's the best work we've ever done to the date, an aggressive album and at the same time, a very risky album, with a 20 minutes length song and with new elements such as a clarinet, which portrays the characteristic Demoniac sound perfectly.

You combine European old school thrash with partly very classical compositions. What are your musical influences on the new album?

Tough question, I think the list of influences could be endless. I think the main influence for Demoniac is the Chilean scene. We "feed" ourselves a lot with national bands like Ripper, Warth, Drencrom, Miserycore, Mental Devastation, Infernal Slaughter, Hellish, just to name a few, all of them with great works. We like a lot many Chilean bands so is inevitable being influenced by them, however there are classic influences like Mayhem, Metallica, Sepultura, Sodom, and others more "under" like Negative Plane, Antichrist, Grand Belial's Key, Sabbat (Japan) and an endless list of names. The list goes larger for the influences that are not metal since we listen to a wide variety of styles like punk, progressive rock, jazz and other Chilean bands that don't play metal. We are not people who listen just metal, the music we listen as individuals is very wide and I think that each thing you listen turns into an influence to some extent, I think that has been a huge contribution to find our own sound and incorporate fresh elements to our music. I'm sure I forgot many bands' names, but at least I gave you a general idea about influences.

What was the idea for playing a clarinet in some songs (which I regrettably interpreted as a saxophone)?

We used a clarinet on two songs of the album, 'Extraviado' and 'So It Goes'. A few years ago, our guitarist N. Young acquired a clarinet and learned to play it. We began to experiment with the clarinet in the rehearsals until the instrument found its place in the compositions that would be for, So It Goes. We had this opportunity to incorporate this instrument and we took it. We are very satisfied with the result we have achieved; however, it is not something definitive for the next works of the band, we will see if we keep using clarinet for future songs.

How did you get the idea to mix English language with your mother tongue Spanish? It sounds pretty cool and it's not really something that every band does!

Good question. For some time we have wanted to give more prominence to the lyrics and in that sense we believe that with songs in Spanish it is much easier for us to deliver a message, and at the same time it is easier for the people that speak Spanish to understand and remember the message. When it comes to writing lyrics, it is much more comfortable for us to do it in our native language, sometimes we wrote songs in Spanish and then we switched them to English to integrate them into a song, but that always makes some of the phrases or ideas that we want to communicate in a certain way to change. So, for this album we just chose to keep certain lyrics in Spanish. It was not our main intention but I think that having lyrics in Spanish and English gives a dynamism to the album, an extra detail to consider when listening to the album, as you say, it is not something very common, so we are quite satisfied with this.

What are your lyrics mainly about besides the abysses of the human soul? What do you want to say with the album title "So It Goes"? That the grim reaper will get us all one day, as you can see on the cover?

The lyrics of the album doesn't have a specific topic but all of them present a negative view of things, a negative perspective. Some lyrics are more superficial while others are more introspective. With some of our lyrics we try to make the listener question some things, shake and dust off some minds, that's why in this album we gave it a major work to lyrics in difference to past albums, where it had less relevance and importance. The album's title is a reference to a kind of negative perspective and a call for people to understand that there are things that are simply out of control and you have to deal and live with it. This can be noticed in the different lyrics of the album, and the music is the perfect atmosphere to spread our thoughts. The homonymous song of the album is the one that reflects this musical-lyrical relation in a better way, going through different scenarios in a journey into madness. If you play the album and pay attention to the lyrics, you will be able to observe that there is a So It Goes stance behind each song. We aren't a band that wants to give an optimist message if we don't feel it as individuals.

You all play in other bands. Do you still have time for other things besides music or do you live only for that?

Unfortunately, the reality is the other way around. We all have other things in our lives (work, studies, etc.) and we have to make time to be able to work on our musical projects. However, we are very dedicated to music, it is something that we are passionate about, so we always manage to dedicate a little time to it. What really makes us feel alive is music and for us it is almost a dream to think that we could live from music and dedicate ourselves completely to that, however we keep working constantly to achieve it, not only with Demoniac but also working on music in its great range. In Chile, music is not something that makes a lot of money unless you are a famous mainstream artist, however, fuck that! This is the way we want to live our lives!

What about concerts? Were you affected a lot by the Corona pandemic? And do you have plans when the whole thing is over?

Well, I think in 2020 we get to play once or twice before the whole Coronavirus thing starts. However, the Coronavirus did not really affect us that much, we were focused on the mixing and mastering process of the album for some months, while we also worked on some layouts, designs and coordinating things with the labels, so fortunately the Coronavirus did not stop our plans, we could not play live these last months but we have used all this time well. Our idea is that when all this is over and live shows can be done, we will play live again and do a So It Goes "release" show, hopefully we can play in places where we have not previously played and also be able to play in other countries. However, these are all just ideas since no one is really sure when this will be over.

How is the Corona situation in Chile? When I look at the statistics for South America, it looks like your country has gotten off very lightly so far. What does the government do differently than other countries? For example, is there a hard lockdown like in Germany or curfews?

In recent months everything had been quite calm, the number of daily infections had been decreasing and some restrictive measures were eliminated, however now the situation is getting worse, now in January, the outbreak of contagions that occurred in Europe a few months ago is now beginning here, so all measures are being stricter. Here the government is applying a curfew and restrictions to go out to certain places, the use of face masks, prohibition of events with crowds, etc. However, the government has done a terrible job and has prioritized economic stability over the health of the people, things that happen when you have a shitty businessman as president.

Your people voted for a new constitution in October; the old one was still from Pinochet's dictatorship. Is that significant for you or are you not affected by it? If it is, what are you hoping that will change in Chile?

It is something significant. When all this started it felt like the people were once and for all tired of all the abuse and privileges that a very small number of people in Chile have. Changing the constitution could be the way to make our country fairer, reduce corruption and distribute resources better, however, I do not know what changes will really occur, here in Chile the political class is rotten, everyone is corrupt and only wants the maximum benefit for themselves and there is the possibility that finally it is the politicians who will write the new constitution instead of the people and if that happens then nothing assures us that the new constitution will be good or means changes. People who have power will try to do the impossible not to lose it!

What is the first thing you will probably do when the pandemic is over, and you get your old life back?

To be honest, I don't know. The only thing that comes to mind is being able to play live, I think that is the most important activity that we have stopped doing due to the pandemic

This very crazy year in review - maybe you can complete the following sentences. The best thing about this year was…

...releasing our new album So It Goes and all the good reception and reviews it has had so far.

...Covid and all the live shows that we weren't able to play.

...the coronavirus to end and go back to concerts, play live and travel.

And last but not least your final words to our readers.