Malice Divine are an up-and-coming force in Canadian black metal right now, with a great album coming out that you can find more info about here. I was able to get in touch with guitarist/vocalist/composer Ric Galvez who was willing to share a few greasy details about the nuts and bolts behind the makings of his self-titled debut. Enjoy! 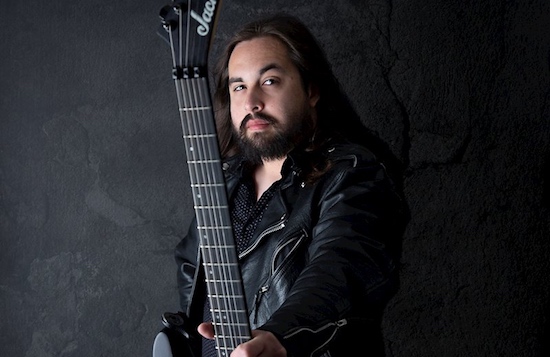 Thanks for your time in answering these questions. To start, tell those who are unfamiliar a bit about Malice Divine.

Malice Divine is my melodic black/death metal solo project, which is about to release its self-titled debut album on February 19th, 2021. I compose all of the music and lyrics and perform vocals, guitars, and bass in the studio.

What bands or musicians would you say are your biggest influences? Give me a top 5.

I first became familiar with your work when I saw you play in Astaroth Incarnate - your promo even mentions this album was composed while you were still with them. What brought you to the decision to part ways and go solo with the material? Was some of this meant for future Astaroth, or was it always meant to be its own thing?

The decision to part ways with Astaroth Incarnate wasn't my choice because I was fired from the band. It was only a matter of time before a split happened because myself and the rest of the band didn't see eye to eye on songwriting, as well as for other reasons. I was also highly considering leaving the band anyways, because what I really wanted to do was my own music, but they beat me to the punch. Every song on the Malice Divine album was meant to be its own thing except for 'In Time', which was a song that I originally wrote for Astaroth Incarnate. Back then it had a different title, as well as a different set of lyrics that were written by the vocalist.

One thing that keeps me coming back to the Malice Divine album is the attention to detail in the songwriting. I also noticed that you have a formal education in music. What kind of effect does your schooling have on how you compose songs?

Well, the most notable way in which my schooling as a music major has affected how I composed songs, is the usage of classical guitar in my music. I spent quite a bit of my time in university taking private classical guitar lessons and ensembles, which has inspired me to incorporate that into my music whenever it called for. There's also some music theory concepts that I learned from my time as a music major that has found its way into my compositions.

The lyrics seem to deal with a lot of psychological and philosophical concepts. Tell us more about what inspired you to write about these topics.

I've always been interested in subjects such as psychology, philosophy, spirituality, etc., and I was inspired to write about these topics particularly as a means of self-reflection and introspection. Lyric writing gives me the opportunity to look inside myself and to express things that normally would be difficult to express otherwise.

You recruited Dylan Gowan for drum duties. How did you come in contact with him and what made him the ideal man for the job?

Back in November 2019, I put up an ad on my Instagram and Facebook pages about looking for a drummer for a new project I was working on, and Dylan was one of the people who reached out to me. I worked with Dylan briefly once before when he filled in on drums for a show with my previous band back in 2018. I was impressed by how fast he learned the songs and how tight our set was overall despite the fact that we only had one full band rehearsal. Given that experience, as well as being familiar with his work in Vesperia and Iomair; I knew that he would be the ideal man for the position. His professionalism, friendliness, and incredibly powerful and tight drumming made that very apparent.

Did you look for a label or was the plan always to put out this album independently? Given the choice you made, how do you feel the reception has been to Malice Divine so far?

I never looked for a label because it was always my intention to release this album independently. Given that I'm going about the album release independently, I feel that the reception to Malice Divine has been great so far!

It seems like you've been keeping busy during the pandemic with everything you've been doing to put together this album. Any advice or words of wisdom you'd give your fellow musicians on how to stay productive through times of lockdown and isolation?

My advice to my fellow musicians on how to stay productive through times of lockdown and isolation would be to focus on what excites you the most and to pursue that. For me, that was working on this album and getting it ready for release. With that being said, it's also important to take care of your physical health and mental health, which I know can be a difficult thing to do during the pandemic, but self-care is absolutely crucial for productivity. Work hard, but also make sure to take the time to take care of yourself in whatever ways you need too!

What do you think the future holds for Malice Divine? Will you be writing more material for the project? Do you have plans to play live (once the pandemic ceases, of course)?

There are definitely a lot of plans for the future for Malice Divine! I already am working on more material right now. I already have plenty of song ideas on the go for the 2nd album. And yes, I am planning to play live once the pandemic ceases. When the time is right, I'll put a live lineup together. Until then, I am going to keep working on new songs, as well as promoting the debut album as much as I can.

Will you be doing a physical release on CD/vinyl or selling merch to support the album? If so, where could one go to buy it?

There will be physical CD's as well as merch (t-shirts & hoodies) for the album. To buy merch you can to the Malice Divine Facebook page at www.facebook.com/malicedivineband or Bandcamp at malicedivine.bandcamp.com

The last words are yours. Anything you'd like to mention about Malice divine that I didn't touch on?

I just wanted to say thank you to everyone who checked out my music and supported me in any way! It's very much appreciated.