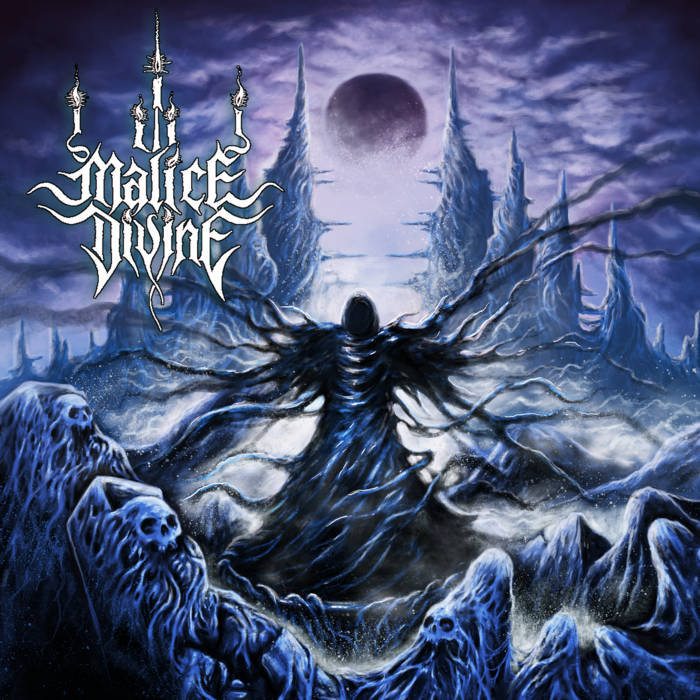 I like Dissection as much as the next guy, but I know as much as anyone else that Jon Nodtveldt had an ear for melody and composition that was near-unrivaled, and it's a reason why the Swedes continue to be so popular and influential. However, as much as their influence tends to seep through in modern acts, it's rare to find a band that's capable of creating the same sort of sleek, aggressive catchiness without adding an extra style into the mix or otherwise diluting the meloblack essence.

At first glance, Malice Divine looks to be the Canadian version of the newer crop of bands in this vein a la Thulcandra, Uada, Hoth and The Spirit. The cover art's blue/purple tones and crisp, rounded production make the influences for the project very apparent right from the get-go, and the album has a very singular and focused purpose front to back. However, that's not to say that this only has one method of execution, far from it - Malice Divine frequently uses early Ulver-esque acoustic passages and heavier, more paced breaks from the tremolo intensity to give this compositional variety - but even those extra garnishes are part of the equation of riff-focused Dissection worship the way it was meant to be. If you're not a fan of the crisp, clean melodic black metal style, stop reading now, cause that's the only thing Malice Divine is in business to deliver.

Despite such a strict adherence to a style, long songs seldom under the 5 minute mark, and a mixing job that is a bit on the clinical side for my tastes (particularly in the drum sounds), I have no issues listening to this from front to back, with infectious verse riffs frequently snapping me back to full attention and getting my head bobbing. Malice Divine writes songs that feel half as long as they are, knowing exactly how long to carry out a riff before adding a lead, changing pace or going into a solo. Every riff seems individually crafted and polished, with songs like 'Quantum Manifestation' and 'Triumphant Return' being based around these driving riffs that could have been on a later Abbath-era Immortal album no problem.

You'd think that this was a full band's work because of the volume of ideas present, the professionalism and attention to detail, but this is a one-man project with a session drummer. Perhaps a little context helps in this case: this is the solo venture of Ric Galvez, who previously wielded the axe in Astaroth Incarnate and departed, perhaps having more and more ideas that were going in a different direction than the rest of the band's principal songwriters. If you're not familiar with Astaroth Incarnate, they're a mixture of black, death and thrash metal with some emphasis on symphonic elements - it's very clusterfucky, good for its own reasons but when you listen to Malice Divine, you can't help but wonder if Galvez's more focused, gradual songwriting style was being held back in his old band in pursuit of theatrical grandiosity. Wonder no more, because this debut LP showcases the full range of his abilities, while still making sure every rapid-fire solo or extended, noodling interlude is written to serve the song above all else.

Although Galvez is primarily a guitarist and it shows in the way the songs are written, one can't overlook the cold, raspy vocal tone that he showcases in Malice Divine - not sure if it's an effect done during tracking or what, but it's got a natural reverb that gets in your skin, especially during the higher shrieks. Some of the vocal lines are a tad too busy and I personally feel as though spacing out some of the lines may have given them some more impact, but at the same time, some of the faster, choppier verses are equally as catchy as the riffs. I don't really mind that they're a tad high in the mix thanks to the tone and most of the delivery. Really, the production is my only gripe with this - I'd like a little more meat in the guitars and a little less emphasis on the drums and vocals - but I'm able to overlook that a majority of the time because of how well-written the songs are and how fully developed this feels, especially considering it's basically a one-man project. These are problems that are easily fixed on a sophomore release, and Malice Divine still has a solid mission statement of a debut album, with a composure to its songwriting and ear-catching nature to the riffs that should be a welcome addition to the collections of those who worship at the altar of old-school melodic black metal.