Fractal Generator are the new force in space death metal right now, with their sophomore album Macrocosmos gaining a ton of traction online. By informing their classic Morbid Angel-styled riff base with a modern sense of cosmic atmosphere, they've created something with a really different and unique that's capturing a lot of ears - mine absolutely included. After listening to this album two or three times, I knew I wanted to get more information about what it was and where it came from. I managed to link up with the generator known only as 040118180514, and the mysterious entity was kind enough to provide me with some source data. Below are my findings. 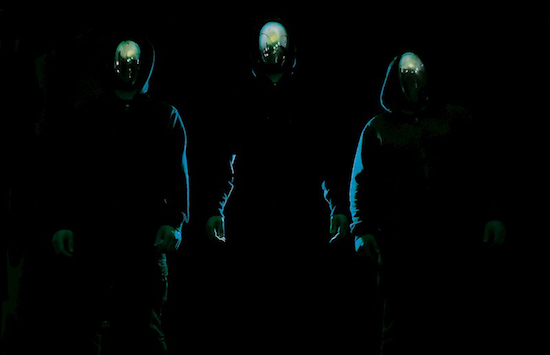 What is the mission statement of Fractal Generator?

Our mission really is to create a certain type of sound that we don't think exists. A dark death metal sound that can be open to incorporating many different styles and ideas and creates an atmosphere that transports you into the cold reaches of space.

From what I've gathered, the early material of Fractal Generator (The Cannibalism of Objects etc.) was written with a loose, improvisational approach, but Macrocosmos sounds much more focused and structured (correct me if I'm wrong). Tell me about the songwriting process for the new album and how the creative process differed compared to previous works (if it did differ much).

The band has changed A LOT since the demo. The demo was a quick improvisational experiment that got some attention online. When we restarted in 2013, we had a very different approach in mind, mainly to write more thought-out and refined material. With each album release, we continue to grow as musicians together and improve our song writing processes, and each member brings unique skills and background that are indispensable to what we do.

To follow up on that, it's been six years since your previous album came out - what took so long? What's the band been up to since the release of Apothosyntheosis?

We did have a lot going on in our personal lives around that time, but I won't get into that. We make sure that our albums are perfect before releasing them, so it takes as long as it takes. It's important to us that each song we release is something special. You could say it is also part of our mission statement.

What were some of the main influences for Macrocosmos (musical or otherwise)?

We're not really influenced by any band lyrically/thematically, we just write about stuff we think is cool and suits the music. I guess you could say we're inspired by science/technology/science fiction/horror etc.

One thing that any listener should get out of your music is the suffocating, cosmic atmosphere. That being said, one might say space death metal is in vogue right now, with bands like Blood Incantation, Artificial Brain and Wormed getting recognition. What do you think makes Fractal Generator unique?

It comes back to wanting to create a certain sound because it doesn't exist. So, when you start from that standpoint, you're likely to end up with something original in the end. I think that shows in our music. We get compared to bands and most of the time I have trouble seeing the similarities.

How important are lyrics and the literary themes behind Macrocosmos? Do they indicate greater meaning and depth or are they mostly just vocal placeholders?

Admittedly we put more time into our music than our lyrics, but I would still say that they are important for telling the story and conveying the meanings we wish to intend.

How did you come into contact with Everlasting Spew and how has the partnership been so far?

They contacted us in early 2017 after we digitally self-released our first album, Apotheosynthesis. Since then they've grown a lot and we can't say enough good things about them. It's been a great experience and they are very professional and hard working. Releasing the new album has really shown us how much experience they've gained over the last few years and we're proud to be part of their roster.

Being from Ontario myself, I can't say I've heard of you guys or seen you live, so it blew me away when I found out you were based in Sudbury. Prior to the pandemic, did you play live often?

We don't play live very often. We have probably played 20 shows or so, a few of which were outside of Sudbury. Mostly southern Ontario.

I appreciate how each member of the band seems to have their own side-projects that have cool things going on themselves, even though they're very different from Fractal Generator. To diverge a bit, tell me more about these other outlets for your creative juices. Any other new music you're working on I should keep an ear out for?

For people into black metal, 040114090512 plays in Symbiotic Growth who released a self-titled EP and is currently writing a new album.

For those into djent he also plays in Tides of Aurora who released an EP and is currently working on a new album as well.

For those into grim, folky post-black metal you can check out Finnr's Cane, who have a new album ready to release soon, or if you're more into old-school symphonic black metal there's Wolven Ancestry which features 2 members from Fractal.

Are there plans for shows and/or touring in the future, once the pandemic ceases?

We will play a few shows to celebrate the album release, but there are no official plans yet.

What is the best way for fans of your ridiculously dope new album to support you (and give you money) during the pandemic?

You can get our album via Everlasting Spew Records https://www.everlastingspew.com & https://everlastingspewrecords.bandcamp.com/album/macrocosmos .

We'll also have the album and merch available through our Bandcamp page in the near future https://fractalgeneratorofficial.bandcamp.com

Thank you for your time in answering these questions. The closing statements are all yours.

Thank you for the interview.