With "Crypt of Ice" by Frozen Soul a highlight of the death metal year 2021 has already been released. The band manages to captivate you with cool riffs and inhuman vocals. Stylistically, the album is reminiscent of old Bolt Thrower, which speaks for itself. The fact that the band presents its debut with the album and has received many good reviews, of course, does not make things less interesting. Time to get to know the band better. I had the honor to ask their guitarist Michael Munday a few questions. So, grab a hot drink and wrap up warm! 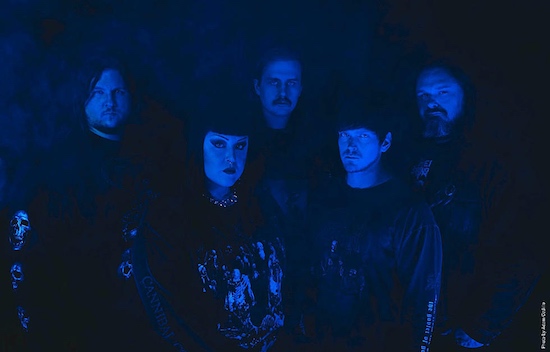 Hello everyone, first of all congratulations on your first album, which has been pretty well received in the metal world. What do you feel about it?

Hello! Hope you're doing well. Thank you so much! We feel really great. We put a lot of hard work into this record and we're ecstatic people love it as much as we do!

How come that after such a short time, a demo and two split tapes you were able to get a record deal with Century Media?

Century Media actually reached out to us shortly after our Frozen Steel tour with our friends Steel Bearing Hand (who you should absolutely check out!). They had been seeing our name everywhere and liked the demo a lot and seemed to believe in us and our work enough to wanna work with us.

Did everything work out as you intended during the recording or would you change anything in retrospect?

In our experiences, nothing ever goes as intended haha. Most everything worked out in the recording process. For me personally, I wouldn't change anything as the whole process was quite a learning experience that we all needed, and the album wouldn’t have come out the way it did if we did change anything!

Personally, I think your album sounds a lot like old Bolt Thrower and somehow also Winter stuff. Was that intentional?

Totally intentional! Bolt Thrower has this groove and heaviness that is undeniable, and we try to keep that alive in our music.

What other influences do you have that consciously or unconsciously flow into your music?

We're all really into video games and movies. Those are forms of art themselves and they have our influence on us in our music for sure. Subconsciously though I'm sure there's plenty of stuff we do that we don't realize because it's just second nature to us.

Your singer Chad sounds pretty inhuman and vicious, especially when he does those grunts. Did you help him with his voice or does he manage such a performance without technical aids?

Minus some reverb, he's able to sound like that all by himself! He has a great voice for this band.

Lyrically the album is about ice, death, dark magic...where do you get your inspiration for the lyrics? The first thing that comes to my mind is "The Thing".

All of the inspiration for our lyrics come from our real-life experiences with trauma, anger, pain, and depression, and we use the ice theme as an analogy, cause everyone gets cold and feels these things too. The whole presentation is a metaphor for these struggles.

Your song 'Encased in Ice' is quite a varied track, what I find a bit irritating are the sounds, which you can only put into the appropriate context if you know the video. Was that planned that way on purpose?

Yes and no. When we originally wrote the song, we just wanted to have a brutal sample of someone being stabbed to death to fit with the lyrics/theme of the song. It all just kinda came together as we came back to re-record the song.

How does a Texan get the idea to write about frost and ice, respectively to call his band Frozen Soul? Ice would be about the last thing that would come to mind when I think of Texas (except as a cube in a drink).

Like i said before, the whole theme of the band is an analogy for the darker side of life and the struggles that we have dealt with personally. But also, being from Texas, it gets pretty fucking hot so it's cool to write about a state of weather we don't get to experience all that often haha.

Do you have any plans for concerts or tours once the whole Corona thing is over?

We will be all over the planet once it's safe to travel!

For me personally, a vacation where it's warm with a cold drink in hand. I'm probably the only person in the band that despises cold weather and I'd much rather be on the beach with a beer than in a snowy mountain cabin with hot chocolate or coffee haha.

Finally, you have the floor - do you have a few words for our readers?

Thank you to anyone who has checked out Crypt of Ice! We love this album and we hope y'all love it as much as we do. We got tons of video content coming in the next few months for y'all to sink your teeth into.

Thank you very much for taking the time for the interview.

Thanks for the questions, these were fun!! Cheers!