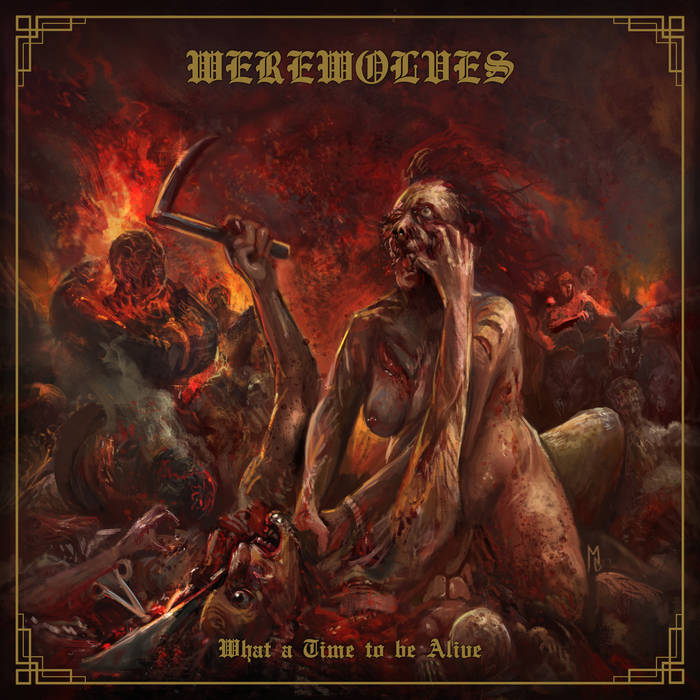 Buy on: Bandcamp
Type: Full-Length
Release Date: January 29th, 2021
Label: Prosthetic Records
Genre: Black, Death
1 I Don't Like You
2 Sublime Wartime Voyeurism
3 Mission Statement
4 Crushgasm
5 Unfathomably Fucked
6 Antisocial
7 Traitors And Bastards
8 A Plague On All Your Houses
9 They Will Pay With Their Own Blood
MetalBite on YouTube
MetalBite on YouTube

What's going on with the Australians from Werewolves? Stepped in dog shit too often while jogging? Too little sleep? Annoying colleagues? I haven't heard such a hateful album as What A Time To Be Alive for a long time. The first song alone, 'I Don't Like You', hits the listener without an intro or any kind of introduction and leaves him, if not with a broken jaw, then at least with a bloody nose and a knocked-out tooth. I don't even want to know how the person they don't like feels. Or if they are even still among the living.

Musically Werewolves continue where they left off on their last album and are a mix of mega aggressive thrash, death, black and a pinch of grindcore (in the style of Nasum, only with longer songs). The singer screams and growls his way through the songs, the drummer, who by the way also plays for tech-deathers Psycroptic, pounds away at his drum kit like it's the one he doesn't like, and the guitars saw their way through the songs with great intensity. Guitar solos are completely out of the question here, but they would only destroy the incredibly energetic, hateful and intense mood that the album spreads (what irony in this context). Stylistically, the album is somewhere between old European thrash bands and Slayer ('They Will Pay With Their Own Blood'), Sinister and similar death metal bands ('Traitors and Bastards') and, as already mentioned, Nasum.

All tracks of the album are kept in a similar style. Each song spreads anger and aggression and there are almost no slower passages in the tracks. Only 'They Will Pay With Their Own Blood' is a slower song with catchy melodies, at least at the beginning, but it is not less intense than the other tracks. If you like an extreme mixture of thrash/ death/ black and grindcore and can well do without pieces that are held in a slower tempo, What A Time To Be Alive is exactly the right thing for you.