The heavy metal year 2021 has started with many excellent albums so far. One of them is the new album of the Australian Werewolves. In line with all the crazy things that are happening in the world right now, the band has given it the title "What a Time to Be Alive". All those who are into ballads and soft tones don't need to read any further now, because the band has recorded the follow-up to "The Dead Are Screaming" within ten months and the result is such an uncompromising and rage-filled black/death/ thrash album that hasn't been released in a long time (in my opinion). I asked singer Sam Bean a few questions to introduce the band to you. Enjoy! 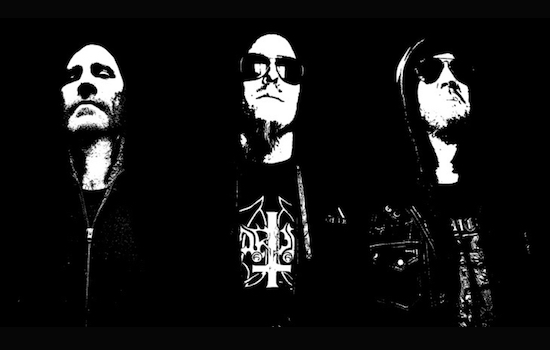 Hello everybody! Thank you so much for taking the time to do this interview with me. How are you guys doing?

We're good! Summer's awesome, nothing has burned down yet. We know you're coming out of a lockdown. We definitely know that sucks.

You have written an incredibly intense and hateful album with "What a Time to Be Alive". Where do you get these emotions from? Did last year's situation in Australia (fires, drought and then Corona) contribute significantly to the inspiration?

All the fires and plague and stuff going on around the world has been more a backdrop to the album, we tend to predate it by a few weeks or so when recording. Can't wait to see what happens when album 3 is getting mixed. I reckon it'll be war. I'm into the studio in March, so start preparing now.

We don't wander around all day suffused with hate but it's easy enough to tap into it… it's staying calm and pleasant all the time that's the real challenge, isn't it? I've got a pretty good memory especially when it comes to assholes, so I can always dredge up some thought about them to make me furious. Failing that, reading YouTube comments tends to get me going.

Music is supposed to be emotional. And death metal was invented to be a vehicle for aggression, which most bands seem to have forgotten. A lot of modern metal feels like an emotional black hole to me, great riffs and skills but just sexless and devoid of feeling. Leaves you feeling less than when you started listening.

The title is meant ironically, I suppose. Did you choose it because of the current situation or was it already decided? I mean, there are some things on this planet that could be better...

It fit the tone of the album perfectly, this very bleak, black humor. I think I picked it up as a catchphrase over the last few years, every time something took a turn for the worse, I'd mutter it darkly. The original title was "Hate Speech" because it felt like there was a lot of that in the world and as you mentioned, the album is very hateful. We changed it though, there was too much of a risk that someone would take it the wrong way and feel compelled to have us cancelled.

You are all active in other bands. Is Werewolves more of a fun project for you or do you see Werewolves as a full band?

Well, it's a fun project but it's turning out more successful than most of our other bands which totally has us flummoxed. I was just on the phone with Matt laughing about it, we were like "OF COURSE it's the band we make the least effort on that turns out the most popular". In any case, we all love being busy and working hard so we probably get more work done with our 'fun project' than people in normal full-time bands get done with theirs.

The opener "I don't like you", who is it dedicated to?

No-one. The last thing I'd ever do is dedicate the effort of a song to someone I don't like.

I was trying to really tap that old hardcore scene knuckleheaded bully-jock vibe, almost like the old NYC bands, where they spend entire songs threatening to kick your ass. It felt direct. Modern metal bands tend to specialize in dissonance and abstracted lyrics, wispy enough so that if someone takes offense or misunderstands them that they can wipe away the meaning. They dance around topics. I guess this is a stand against that. We drive a tank through topics.

Many of your lyrics have an ironic touch, but also a spark of reality. What do you want to express with the lyrics?

Savage, blistering, blithering fury. Quite often, the aim is to take things so far that it feels ridiculous. I've also spent the last few years appalled at the lack of leadership in the world so there's hints of those feelings in there. And I noticed that both James Elroy and Pig Destroyer have a gift, which is the ability to finish a chapter or lyric with a few sentences that hit hard, and that's something I try to do. Elroy's 'American Tabloid' does that well, and a good Pig Destroyer example would be "The Girl in the Slayer Jacket"

If you listen to 'Traitors and Bastards', the sample at the end could make you think that you are a bit misogynistic....

I imagine you're referring to the use of the 'c word'? I couldn't pick anything else about the sample that could possibly be viewed that way. I don't think anyone in Australia, or the UK would think using 'cunt' makes us misogynistic as it's a commonly used epithet directed at both genders, and in our case neither the context nor intent are misogynistic. If we wanted to appear misogynistic in a music genre that includes bands like Cannibal Corpse and Whoretopsy, I believe we'd have to try a lot harder.

I do use strong language and imagery and I don't apologize for it. I think it would be fatuous to try and make shockingly super-aggressive music, and then start worrying about people getting offended by it.

What would you say is the main difference between your first album "The Dead are Screaming" and the current one?

I think the debut is us having fun, and the current album is us nailing our sound and feeling. How does that translate to the listener? I think most people would find our current album far, far more aggressive.

At Metal Archives you are listed as a "technical black/death metal" band. Would you agree with this description? Personally, I don't find much black metal approaches with you, more grindcore, thrash and death…

Nope. I don't think we're technical at all, someone probably saw that Dave is on drums and made the assumption that we're a tech band. Having said that, I keep hearing people say that some of our material is technical…I just can't square that away with bands like Archspire or Rings of Saturn, really. We're simply not in that universe, and the fact that we play competently is the bare minimum you'd expect from a death metal band. I think we're definitely blackened death metal and that's probably due to the higher vocals and the trem-picked power chords. Everyone's going to have a different take on it.

According to the site your new album is limited to 500 copies. Is that so and if so, why?

There's probably only 500 or so cunts out there crazy enough to buy our shit. Honestly, that question is above my pay grade. We bang out the music, the label makes sales decisions, and the more we insert ourselves in their business the less energy we have for making music.

Your albums have been released about ten months apart. Do you already have new songs in the box, so there will be the third album from you for Christmas?

Third album should be finished shortly and albums four to six are already written. The other guys have done their parts, they're waiting for me to hurry up and finish. I aim to be done in March. I suspect the next album will be out January 2022, but that's not a discussion anyone has had yet. I quite like the idea of releasing a Christmas album though! We also have some surprises already recorded that I imagine will come out during the year.

Are there any plans to tour with Werewolves once Pandemic is over?

No plans yet. I still think it's a little early to go making tour plans, we still don't know how quickly everywhere will open back up after the vaccination programs happen. We want to play live, I'm not sure if we're all about travelling the world playing dozens of shows to small venues of twenty people. It has to be something different. We're too old to do something we've already done hundreds of times, decades ago.

What is the current state of the Australian metal scene? There are a lot of top bands of different styles in your country. Is there a strong cohesion or is everyone cooking their own soup?

I don't really know; I don't pay much attention to the scene here. I know there's competent bands and operators, and each state here has a few core bands and people making shit happen. I spend my time at raves and yoga. I guess when we start appearing live that I'll find out what's going on. I suspect everyone's cooking their own soup right now, it's pretty hard to get interstate to work with other people.

I think I'm getting a migraine from thinking angry thoughts. Listen to our album, smash up your bedroom, destroy.

Thank you very much for your answers!