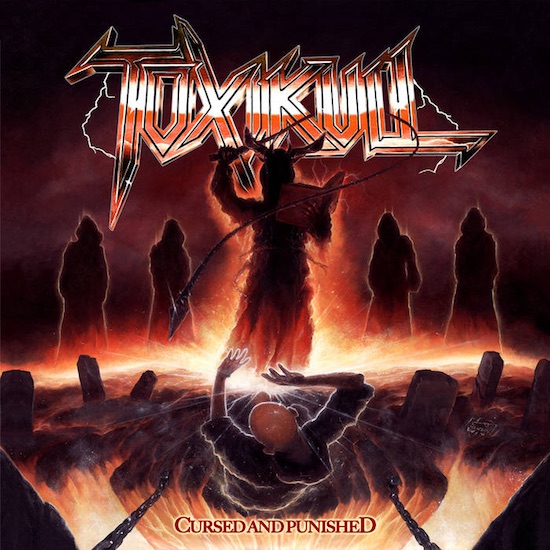 The ever-busy guy that runs Dying Victims Productions has thrown another underground act into the arena and my first impression was that Toxikull does not lack energy. Definitely not! The title track bursts out of my speakers like… I don’t know. If energy would be able to explode, the detonation would exactly sound like this manifesto of speed metal. It’s a great start into an album that avoids tiring prefaces, long explanations and other frippery. Eight songs and two intros shape a work with a playtime of 33 minutes. This is long enough for a full-length and short enough to follow the compositions without any loss of attention. And, by the way, the comparatively mediocre 'Helluminate', the only piece that crosses the five minutes mark, shows that the guys are well advised to keep things lean. The riffing of this song is pretty cool, but the silken and lame guitar solo and the stupid fade-out lack spirit and bring the track to an under-average end. No other detail of 'Helluminate' has the power to make up for this.

Speed metal is a somewhat dubious genre, because sometimes it presents pretty light tone sequences of narcissistic guitar heroes who have gone haywire. Equally crazy lead singers accompany them with eunuch-like voices. The sad result is that even “Painkiller” Rob H. misses “a touch of evil”. By the way, the Halford of Toxikull calls himself Lex Thunder (not to be confused with Old Shatterhand, Lex Barker) and his voice also hovers at dizzying heights, but it does not lack curriness. Okay, during the closer he sporadically sounds like King Diamond, but he uses his normal pitch as well and this approach lends the songs an extra portion of power. Speaking of power, it goes more or less without saying that power metal elements play their part on Cursed and Punished as well. The promo speaks of Toxikull (whenever I write this name, I have the feeling that two letters are missing between the “i” and the “k”) as a modern version of Helstar or Liege Lord and this is, despite my general mistrust concerning promo texts, exceptionally true. 'Killer Night' emphasises this facet of the band’s sound and it shows impressively that Toxikull are able to manage mid-tempo songs in a clever manner. The song sounds like it was stolen from the archive of Trauma where they have hidden the material that due to whatever reasons did not find the way on “Scratch and Scream”. This is pure traditional metal, offered in a fresh and vital way.

Production-wise, the old school feeling takes centre stage. The eighties, oh my God, the golden eighties… guess this decade will never die. Honestly speaking, I believe that my calendar is a bloody liar, because it wants me to believe that the eighties are gone for more than three decades…? Bullshit - Toxikull from Portugal proves the opposite. But wait, as far as I know, the beautiful Iberian Peninsula belongs to another time zone than good old Germany. I did not know that the difference is that high, but it’s never too late to learn. However, the full-length has a voluminous, warm and somehow analogue sound that fits the musical offering very well.

All in all, Toxikull’s second album suffers from the kitschy artwork and two or three pretty melodic parts that dwell in the neighbourhood of the well cleaned streets where childish Helloween metal is lurking around the corner. However, when taking a look at the big picture, the quartet doubtlessly enriches the global speed / power / traditional metal scene. Late jewels like 'Dark Glory' or 'Speed Blood Metal' (I am very happy that they avoid stereotypes successfully…) make clear that these genres do not deserve to be placed in the slightly dusty corners of the metal hall of fame.