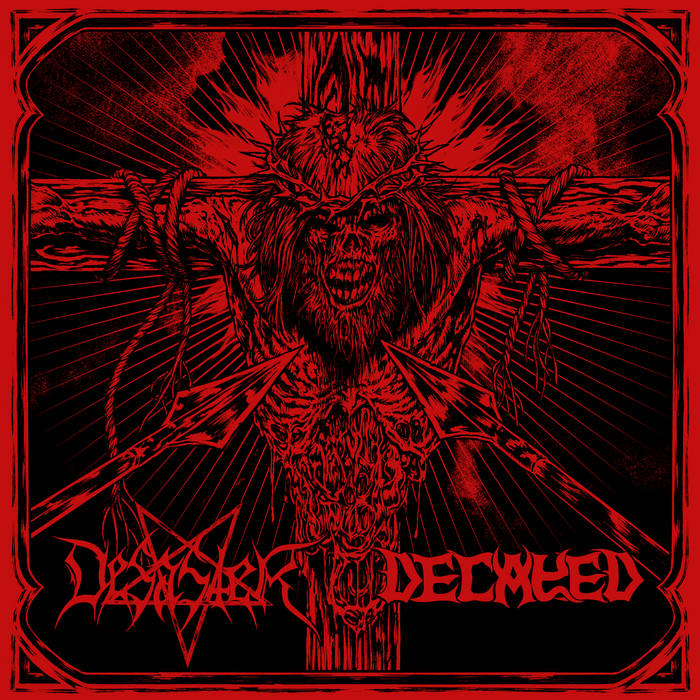 Any kind of meeting is dangerous in times of Corona, at least if we believe what the vast majority of our highly respected politicians keep telling us. (Attention: two words in the previous sentence should not be taken seriously.) Thank God, nobody is crazy enough to trust these dubious people. Anyway, the collaboration of two national institutions in terms of extreme and dark metal has a dangerous undertone, that’s pretty obvious.

With the experience of more than 60 years in sum, it comes as no surprise that both Desaster and Decayed deliver meticulously designed songs for this split. Well, maybe the contribution of my German compatriots is somewhat too carefully constructed. The gloomy intro opens a song that somehow does not come out of its shell. Although equipped with a playtime of more than five minutes, it seems to me that it ends before it has really started. I don’t say that it’s a disappointment and the typical trademarks of the band, for example Sataniac’s raw, brutal and expressive voice, show up violently. Just inhale the cruel tone of the guitar. However, the last iota of ingenuity is missing, although I admit that the song – which holds very fast sections as well – grows with every new round. 75% for a good yet not excellent piece that has to face the bitter (or glorious?) truth: The Teutonic force has already written better riffs and songs.

The Portuguese formation offers a less diverse yet coherent track whose instrumental mid-tempo sections rumble through the shady wastelands of blasphemy. Its stoic riffing brings some mid-paced Immortal tracks to my mind, but the lead vocalist does not sound as if he has been born in Blashyrkh. Decayed’s contribution relies on the strong guitar line that carries the song from the beginning to end. It’s effective, stable and really okay, but I cannot say that it is among the most exciting tracks I have ever heard. The production is less clear than that of their partners in crime, but sharp enough to bring the power of the music to light.

Honestly speaking, I’m not quite sure if Desaster’s song is marginally better. Guess it’s just my incomprehensible patriotism which tries to fool me. Thus, I tend to the Solomonic judgment: Tie, 75% for Decayed as well – and for the entire split.