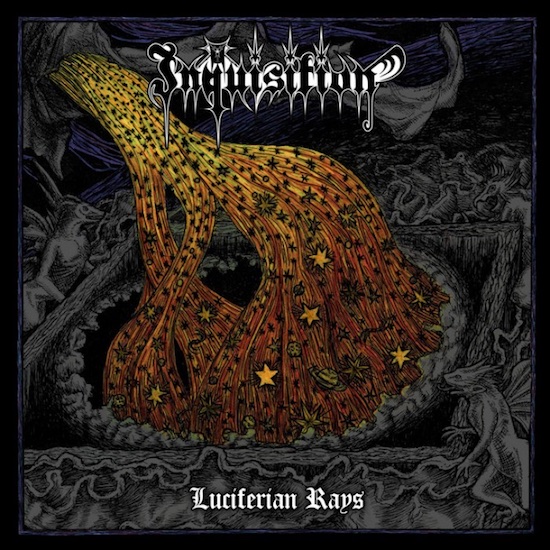 Music is for the ears and not for the eyes. Normally! Yet here comes a piece of art one has to consume with both ears and eyes. Inquisition are back with one new track and the video is maybe the best I’ve ever seen. The band performs at a coast with bizarre rock formations, the cloudy sky puts everything in a sallow light and the endless sea seems to open the gates to eternity. Last but not least, the Grim Reaper is also present, but slightly disoriented. Anyway, fantastic pictures of a drum kit in the sea and a front man who performs on one of these rocks deliver the perfect visual component for a song that deserves exactly this monumental sight.

Despite the time span of five years without new recordings, Inquisition’s majestic Luciferian Rays presents a seamless follow-on to the last equally great albums of the duo. No typical trademark is missing. The demonic yet well understandable voice sings lyrics which are formed by many “usual” and “simple” words, but exactly the simplicity of the text conveys a very special form of spirituality. The musical grandeur is based on a dense sound and among other things on the fantastically miniature melodies which show up after every line of the verses. 'Luciferian Rays' is no overly extreme song and the dominating mid-tempo underlines the rather mid-harsh approach. However, it is full of passionate adoration, diabolic aesthetics and unsolved mysteries. The perfect flow of the melodic chorus (and the entire song) and the really great and profound guitar solos with their tragic and fatalistic tones add the final touch to a true masterpiece which lies in close proximity to perfection.

Two open questions remain: where the hell has this video been filmed? And, even more important: how long do we still have to wait for a new full-length? I don’t expect an album with ten or twelve killers of this kind – nevertheless, I eagerly await the successor of Bloodshed Across the Empyrian Alter….