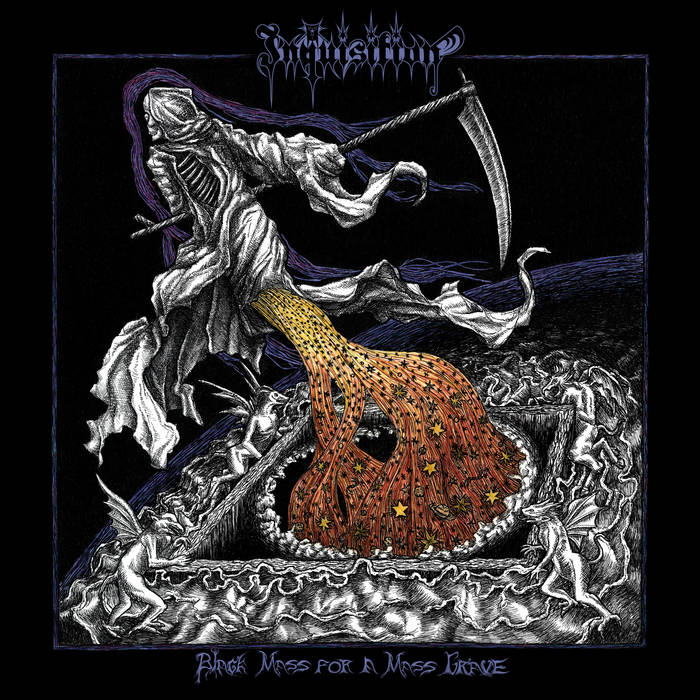 Type: Full-Length
Release Date: November 20th, 2020
Label: Agonia Records
Genre: Black
1 Spirit Of The Black Star
2 Luciferian Rays
3 Necromancy Through A Buried Cosmos
4 Triumphant Cosmic Death
5 My Spirit Shall Join A Constellation Of Swords
6 Ceremony For The Gathering Of Death
7 Majesty Of The Expanding Tomb
8 A Glorious Shadow From Fire And Ashes
9 Extinction Of Darkness And Light
10 Hymn To The Absolute Majesty Of Darkness And Fire
11 Beast Of Creation And Master Of Time
12 Black Mass For A Mass Grave
MetalBite on YouTube

Either black metal has a magical core or it is no black metal at all. A girl is pregnant or not, there’s nothing between (as far as I know) and a black metal album needs total darkness, not just some dark corners. However, I don’t want to begin a philosophical lecture, but a review for the latest album of two musicians who have already proved evidence that their mindset matches the spirituality of the lightless subgenre perfectly. In short, Inquisition are back after a break of four years.

Black Mass For A Mass Grave is an almost ordinary title after Bloodshed Across The Empyrian Altar Beyond The Celestial Zenith. Yet we know that it’s surely a fault to judge a book by its cover. And it goes without saying that the real might of Inquisition is not reflected in their album names, but in their music. It creates a dark, misanthropic and sometimes melancholic universe, a galaxy where nearly dreamful guitar lines are allowed from time to time, because they never sound sweet ('Necromancy Through A Buried Cosmos'). The guitar of Dagon is like a miracle bag and he is able to generate incredible, strange sounds. In its best moments, the music of the Colombians appears as a dark lake in a volcanic crater. One can get lost in the material of Black Mass... and forget the daily trouble, such as (from public to private) Corona, incompetent politicians, small-minded neighbours and the weeping eczema at the nape of the neck.

It cannot be said often enough: Inquisition have found their own style in a world of copycats and spitting images. That’s remarkable and this fact makes it easy to like Black Mass…, although it suffers from a detail. The two artists have slowed down the average velocity. I admit that they master the mid-tempo parts as well, but I don’t think that the album benefits from the widespread absence of murderous tempo. The full-length reveals a comparatively high degree of uniformity, especially in its centre. Inquisition have chosen the “Bolt Thrower approach”. This means the single songs seem to be less important than the monolithic overall impression of the album in its entirety. That’s not a bad thing per se and the British legend has been one of the best death metal bands the world has ever seen (and heard!). In particular their masterpiece “...for Victory” cannot be beaten.

Sorry, I digress. Inquisition is in the focus and I wish there would be more songs like 'A Glorious Shadow From Fire And Ashes'. It is another song which relies on mid-paced rhythms, but it has a more aggressive touch than many other tracks. 'Spirit Of The Black Star' marks an outstanding track as well. The opener presents fast drums that stand in contrast to relatively stoic yet absolutely fantastic guitar lines. This song and the following absolutely brilliant 'Luciferian Rays' are the early highlights of the new dozen of songs which show all highly appreciated trademarks of the two corpsepainted creatures: the impenetrable guitar sound, the demon-like vocals, the no frills drumming and the genre-typical atmosphere. Maybe Black Mass… points in the wrong direction in view of the lack of velocity, but it’s still a great album with a very good sound for this kind of black metal, although they could have given the voice slightly more room.

It is also positive that the opus does not belong to those works that get weaker with every track. 'Extinction Of Darkness And Light' on position nine of the track list surprises with a mix of wistfulness and vibrancy – and it does not matter that the livelier sections almost sound like East European folklore in a metallic design. 'Beast Of Creation And Master Of Time', the last regular song, is another late jewel. Here the well-known grimness shimmers through the pretty fast rhythms. Inquisition still know how to fight back and that’s naturally a good thing.

I did not lose many words about the advance track of the album, 'Luciferian Rites'. There exists already a review for this soon-to-be-classic. Of course, you do not need to read this review, but you must see the absolutely excellent official video for this song on YouTube. And that’s not all, I’m not yet ready: you also have to lend an ear to Black Mass For A Mass Grave or you shall be punished with the loss of your hearing. It’s probably not the masterpiece in the wealthy catalogue of Inquisition, but it’s still a full-length only fools ignore. It’s true black metal and that’s simply great.