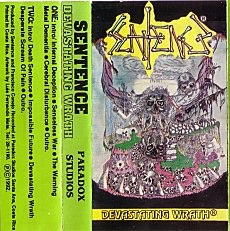 I purchased this album to give a chance to national metal (I’m Costa Rican) and learn some more about it, and I am impressed the extremely good musicianship but the production of the album sucks. These guys are really good, it’s a shame they stopped playing because of the infamous chase police gave to metal fans on that time… but that’s another story.

As I said the album’s quality is not the best, but it is acceptable. After hearing it 5 or 6 times you forget the way it sounds and the volume problems. This is actually a very long demo recorded on a cassette and in 2003 it was remastered, despite this, I enjoy every second here, every single note of every instrument, this is art.

Guitar work is excellent, the riffs are powerful and destructive, mid paced thrashy palm-mutted sections aren't predominant but can be noticed many times, melodic parts are present too, and guitar solos are fucking great. In 'Desperate Scream Of Pain' guitarists change leads seven times! The singer is good, but not as good as the guitarist. His voice is low in the mix, but at least I can understand what he is yelling if read the lyrics. Bass is cool too, but isn't very audible. There are few little solos you can hear in 'Devastating Wrath', one of my favorite tracks of the album, and the intro of 'Senseless War'. Drums are fast and they go along well with the riffs, there are no blast beats because they play death/thrash and it's just unnecessary to reach that speed. There are some acoustic guitars that can be heard on the intro of 'Death Sentence', and the last track that is merely acoustic, giving a nice touch to the album.

Lyrics are another aspect that deserves to be mentioned. They are about ecology, to protect earth and that stuff which I found very cool because that is an issue that really matters. Also there is 'Metal Dementia' that is against idiots who think that having a metal attitude is to sacrifice animals and make riots everywhere.

In general, the band sounds like a mix between "Scream Bloody Gore" and "Reign In Blood", but heavier than those 2 and with an awful production. Fast riffs, crazy solos, and some slow parts with an “evil” feel on them. The album is full of good moments, there are no weak points in the music itself and it kicks ass from the start to the end. A very good debut album.