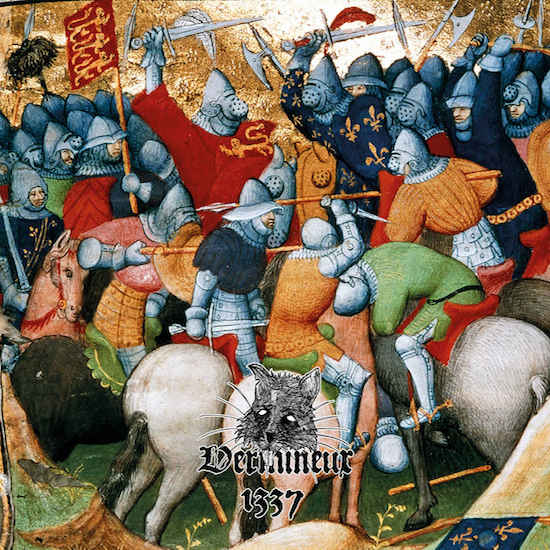 There's been much contest but this hands down makes it seem as though there had not been a competition in the first place. And to be honest, black metal is not a competition...... What better time than now to stray from modernity to the days of crumbling ancients. To finally immerse oneself in one's thoughts during the beauty and delight of this seclusion as it were a normality of past times. Vermineux offers a 50 minute demo, yes a demo that is sprawling and is also of the highest quality within black metal. Engineered by Minenwerfer vocalist, Spectre, 1337 follows 1315 that was previously released in 2018 by Vermineux that likewise, possessed a runtime of 50 minutes or so according to what I was able to pull up on Encyclopaedia Metallum: The Metal Archives. However; since I have not been able to sink into the previous work of Vermineux, I can't give account or make comparisons between the two releases; as far a 1337 goes however, it's a stellar work of black metal artistry that truly harkens back to aeons' elder and glorious.

It's ambient, lethal, all the while graceful and poignant, 1337 takes some of the best moments within the genre and consolidates them. Marked deeply by a classicism and scholarly character, 1337 appears to be unbothered by the ways of here and now, instead focusing only on recreating the damaged fabric of the genre. Spectre's voice on the demo is of sheer eldritch might, managing to exhibit vigor and stamina through his screams that aligns with the rhythms of melancholy or overwhelming aggression. The guitars with staggering precision connect its strings with the wailing cries of late first wave to early 2nd wave riffing, tremolo hooks and chords. Steadily becoming more and more of a challenge to the acoustic pieces, ambient intermezzos and chanting, the riff work on tracks the likes of 'Oriflamme', 'Bloodlines', 'Cotereaux' and 'Crécy' fight for the right to make a podium entry with regards to each instrumental addition to 1337. You'd have to dig for those moments of serenity but the reward is surely there for the disciplined and adventurous listener.

Ambient installments are done exceptionally well on 1337, it's almost as though they're presented in the most deceptive manner, with no real indication of when they would be introduced, instead are only weaved into the textures of the material soothingly and with a touch of antediluvian delicacy. You hear it in the backdrop of the acoustic rhythm and chants of 'A Ship is Burning' to tracks such as 'Valois' and 'Plantagenet' and are even featured on the more violent pieces such as 'Bloodlines' (watch out for the Inquisition riffing at 04:29). These ambient moments at times almost make you forget that the drums even exist. Giving one the impression that the drumming was merely a watchful associate to the rest of the music, only there to oversee and cast the foundation for it all to work; that at instances, even bring to mind the likes of Runespell or Blood Stronghold.

The production is as I would have expected it to be: ancestral. And the cover artwork would reel in anyone who appreciates this kind of effort. My only gripe with this Purity Through Fire release is that 1337 does not have a vinyl release set which is bothering to me. A recording this decorated deserves to be placed on the format. 1337 is a songbird to a time long gone with remnants of its existence held at heart by those who cherish it.