It is rare to find a grind album that is so dynamic and intense but without losing any of the killer brutality that this genre is known for. Visceral Bleeding haven’t been in the caper all that long as a unit, but with "Remnants of Deprivation" they have created one of the more interesting formulas for a metal album. However while not breaking down any major musical barriers Visceral Bleeding are certainly giving other well known names a reason to stand up and take a listen to some truly vigorous metal. Peter (or Laughing-Pete, for the amount of times he laughed during the interview) gives us the low-down on a few of the more intrinsic factors that make up Visceral Bleeding and the new album. 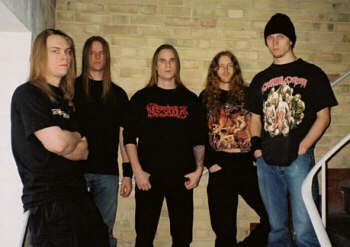 Thanks man, and Yeah! We are very happy with the way it turned out. Perhaps it is a little short, we actually had one more song almost finished but we couldn’t seem to get it done so I guess it will be on our next album.

Could you give me some background information as to how Visceral Bleeding got together?

Well, Niklas Dewerud and I are old friends and we were jamming a bit back in 96-97 and then we decided to do something serious with it and started to look for a perfect line-up. We tried out a few guitarists but none of them were serious enough. And then all of a sudden we met Calle in a pub here in Kalmar and started to discuss music and it turned out he was a guitarist and that he would love to be part of Visceral Bleeding. He played the guitar for a while but we couldn’t seem to find a bass player either so we decided that Calle was going to take care of that and Marcus, a very old friend of mine from Växjö joined in as Lead guitarist. Somewhere in the middle of all this Dennis joined in as singer and we felt right away that this was the perfect line up. Sadly Niklas has now left Visceral Bleeding, but we have found a perfect replacement in Tobbe "Rotten Boy" Persson.

We have worked incredibly hard on all the arrangements. Trying out riffs and so on. Now we have a pretty good idea of what V.B is about so the next album will probably be much easier to write. But we have to stay focused so it doesn’t turn out to be a rip off of "Remnants", it has to be a completely new album if you know what I mean.

I gotta ask… Tobias "Rotten Boy" Persson plays drums permanently for Visceral Bleeding now. What is the story behind the nickname?

[Laughs]… Actually it’s from Spawn of Possessions song ‘Church of Deviance’. We started to call Tobbe "Rotten Boy" after we had been to the Sweden rock festival where he made sure to prove he didn’t deserve any other name! [Laughs] Drunk as a goat all the time and so on, we felt that he was completely rotten so… check out the gallery on the Spawn of Possessions site and you will find a picture of Tobbes tattooed leg.

Are you guys all Cannibal Corpse and Morbid Angel fans? Because I seriously dig "Remnants of Deprivation", yet I find it very, very hard to get into anything Cannibal Corpse has ever released upon the world.

I really really like "Vile" by Cannibal Corpse; perhaps not the best sound in the world but I love how much time they must have spent on arranging those songs. Of course we like Morbid Angel, especially the old albums, but we’re not super fans, except Dennis who is a Morbid Freak [laughs]. I listen to Monstrosity – "Millenium", Gorguts – "Erosion Of Sanity" and Suffocation – "Pierced From Within" a lot. Those three albums are pretty much the reason I’m playing the way I am. 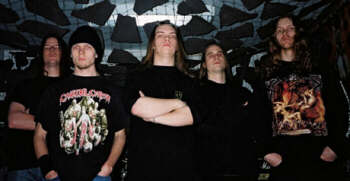 Many friends that I know who have listened to "Remnants of Deprivation" are more impressed by the amount of tempo changes and variations within each single song you have composed. The death genre seems to be a little bit null in regards to this aspect. Do you have any thoughts?

We love to make the songs as "deranged" as we can, with tempo changes and so on. I think it’s just a way to keep us on the edge of what we can play. The next album will follow in those footsteps I can assure you, [laughs]. If you like that kind of death metal, you have to check out Spawn of Possessions upcoming album "Cabinet". It’s the sickest piece of music I have ever heard. Oh man… you have to listen to it like 5-6 times before you even understand what the hell is going on!

Vocalist, Dennis has a great voice, I can't remember the last time I heard a human bark like a dog, like in the track 'Butcher Knife Impalement' and other selected parts of "Remnants of Deprivation".

[Laughs]… Yeah, we call it "Burken". It didn’t turn out just like we had hoped, but I still think its pretty cool. And yeah, Dennis has a great voice, too bad he had a really bad cold when he did his vocals otherwise it would have been even more aggressive and brutal.

With a name like 'Visceral Bleeding' surely the press and feedback you would get back concerning the death theme may be rather negative concerning the sheer weight of death/grind bands out there with the death/gore lyrics and aspects. Is it possible to be a death/grind band and not specifically called 'Visceral Bleeding' or something of that nature? Don't get me wrong though, I don't have a problem with your band's name… but I think you can see where I am coming from.

I absolutely understand what you mean, and yeah we have had a lot of questions about why we don’t try to break any new ground with our lyrics and so on, but I think it’s a way to make the bigger picture, and the whole "image", more brutal. I definitely think it adds brutality and aggression to the band and the music.

I have seen some of Mike Bohatch's artwork around before, yet "Remnants of Deprivation" is the last album I would expect him to be working on, that being said the cover is very cool. It does wonders for the album having such good artwork.

Absolutely, and a big piece of that pie should go to Paul Bailey who did the amazing layout. Chris didn’t want us to have a typical gore cover so we had to make sure we found a picture that was really cool and dirty, you know? And I think we found one that is perfect for the album. I’m glad that we didn’t take a gore image, if we had there would have been thousands of questions about why… [laughs] 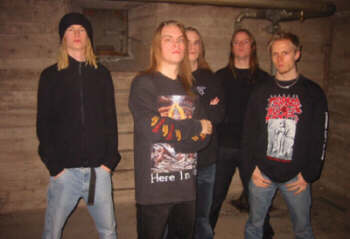 The banjo on 'To Disgrace Condemned'? What is going on there? That has to be one of the most innovative musical moves in death metal, which frankly there should be more of. Was this intentional, or were you just mucking around in the studio and thought, "what the hell we'll bring a banjo in on this part!"?

[Laughs] It was decided a long time before we hit the studio. We even rehearsed it. The whole song is a tribute to the movie "The Deliverance". See that movie and read our lyrics and you will understand it perfectly. [Laughs] It is a great movie, you will love it.

Again speaking of the banjo… is there a possibility for more unique instruments in future Visceral Bleeding albums?

You’ll never know, but there is nothing planned at the moment.

Was the song writing a collective band effort on "Remnants of Deprivation"? Also how do you go about writing the lyrics? Is there a real inspiration for impaling people with butcher knives or do you flick through the pages of the thesaurus and dictionary for some natty phrases (I know I would)?

I wrote most of the riffs on "Remnants of Deprivation" and Niklas and I arranged most of it. But of course we re- arrange a lot in the songs during rehearsal. When I write the lyrics I just sit down and think of a cool title for a song and then I just write around it. Nothing deeper than that I’m afraid.

Is there a meaning behind the title for "Remnants of Deprivation"?

Sort of, the song is about the extinction of life. And new forms that start to evolve. I don’t know if the picture is showing you the annihilation or the new forms evolving… I guess that’s in the eye of the beholder…

Does it pose much of a problem Retribute Records being located in Britain and you guys being a Swedish band, and based in Sweden?

No problems at all, we haven’t had a single problem with Chris. We have e-mail contact almost every day, so it has been working out great.

Just a final question. Have you guys got much live playing lined up to support "Remnants of Deprivation"? If you ever feel the inclination to travel to Australia for some live action, rest assured you will have one bloke to see you play! Thanks for answering these questions.

[Laughs] Cool man!! After the show I’ll buy you a beer man [laughs]… but seriously I don’t think we will do much touring on "Remnants of Deprivation", which is a shame, but we are at the moment moulding Tobbe to be a perfect Visceral Bleeding drummer and we are writing new material and so on.

Thanks for the interview and the great support, hail!