Vomitory – the name speaks for itself. I don’t think anyone can affiliate that name with nicely cut boys playing melodic tunes with orchestras while girls in white dresses joyfully dance. Vomitory is all about pure, old-school Swedish death metal that grabs, kicks, bites and in the end spits out the useless living creatures that we are. With their new outstanding album “Blood Rapture” those four Swedes delivered so much brutality that it might be more than enough than half the Scandinavian bands could handle in their lifetime. I asked Ulf Dalegren (guitar) why they don’t play melodic death, if there will be violins on their next release and few other things you might want to know. 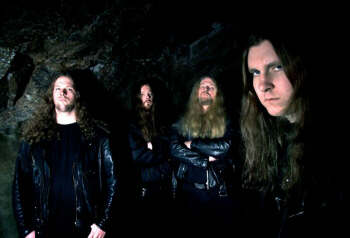 Congratulations on your outstanding new album! “Blood Rapture” took over my player and doesn’t want to leave...

Your new album has been out for some time now; what are the reactions of the press and fans? Are you satisfied with this reaction?

Vomitory is one of the most recognized bands amongst Death Metal fans, how hard is it to satisfy them with a new release? Do you feel any pressure writing new songs?

No, we never felt any pressure. What speaks to that is when we signed to Metal Blade we joined the list of one of the best death metal bands in the world but we felt like we should go on and do our own thing, don’t try to change. The way we sound today is something we have been doing for many years. Vomitory is what it is and trying to change something is just getting into troubles. We write songs how we feel them and what we would like to listen to ourselves and be satisfied with. I don’t thing we’ll ever change our style or direction; Vomitory is Vomitory, it sound in a special way and it’s going to continue that way.

Since I didn’t have a chance to talk to you sooner I’m going to ask few questions from the past. After “Redemption” in 1999, Jussi Linna left the band. What happened?

Basically it just didn’t work out. There were difficulties with everything, not like we had fights or anything but things just didn’t work out. The four other guys in the band had pretty much same thoughts and same kind of ideas about things, how we should sound or how we should try to make songs. When it came to tours there were no problems between four of us but the fifth member always messed things up, he didn’t know anything, didn’t show up in time... those were small kinds of annoying things that happened all the time so we finally got sick and tired of it. We discussed all those problems with him and he told us that he’s going to change and everything is going to be better but when we went to the studio to record “Redemption” album it appeared to us that he wasn’t involved and he wasn’t a good songwriter or a singer either. If we wanted to continue the members in the band should be able to trust each other and be able to relay on each other and he was the guy who always wanted something else than four of us and because of it everything took much more time and energy. So, we told him to leave and I don’t think he understood why even though we've explained everything. Well, things work out much better these days when he’s not in the band and that speaks for itself.

Back then you also changed labels, how did you end up on Metal Blade and are you satisfied with the work they do for you? 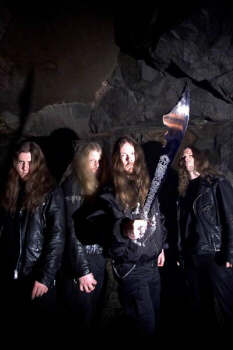 Are any members of the group involved in any other projects?

No, at the moment none of us is involved with any side projects. Vomitory takes up pretty much all of our time and we also have full-time jobs on the side when we are not on tour or in the studio. We are satisfied with the music we play in Vomitory and we don’t feel any urge to start anything new, we’re happy with what we do in our band. Maybe in the future...

Does each member of the band have an equal role as far as producing lyrics and the music?

Tobias (Gustafsson), our drummer is the main songwriter; he does like 85-90% of the music. He’s an excellent songwriter, he’s very talented and everything comes to him very naturally. Nobody complains about him writing most of the music; if he’s the best composer then why would we? Everyone in the band is responsible for something, for example, Erik and me are writing the lyrics and some music... like I said everyone in the band has an influence on our songs. Every song is open for a discussion and if something needs to be changed it’s changed. It’s not like Tobias writes 90% of the songs and the other guys can't say anything about it. Everybody is free to express his own opinion and make changes if needed so at the end everyone is satisfied with what we’re playing.

Most of the Swedish bands play some kind of melodic metal style, how did you stay away from this trend and remain playing pure and brutal death metal?

I think the main reason is that we don’t like melodic death metal [laughs]. We always wanted to play what we like ourselves. We play the style of death metal that we’re listening to and when this new trend started we weren’t interested in it at all and we didn’t want to be a part of it. We play what we like to listen to and we didn’t feel the urge to change that when melodic metal became popular.

With each release your music and production is getting better and better, what do you do every time you enter the studio that makes each album top the previous one?

Well, the first album “Raped In Their Own Blood” was recorded in a really cheap studio, we had really small budget and sound on that album really suffers but that was all we could afford at that moment. For the second one we received much bigger budget and we also got in touch with producer Henrik Larsson who we met at the tour few years back. He offered us a good deal and we recorded “Redemption” album that we were really satisfied with. We wanted to keep working with Henrik and for the “Revelation Nausea” there was no question whose going to be the producer. We wanted to develop “Redemption” sound a little bit further and from learnt mistakes from previous session improve every aspect of “Revelation Nausea”. On “Blood Rapture” we used two different guitar amps to create a little different guitar sound but than again we didn’t try to loose the sound from our previous releases. Most of the changes are in equipment ones, new drum’s microphones, amps... stuff like that. From the first album we did with Henrik we tried to improve and I think we succeeded. 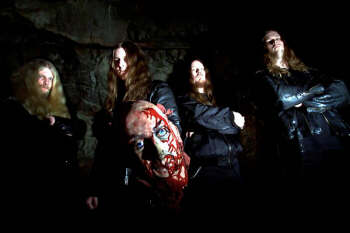 Now that the new album is out what are your plans to support it?

We recently finished the European tour with Amon Amarth and at the moment we’re rehearsing for Wacken festival. We are trying as hard as we can to go to the States and do a full American tour but we have nothing planned at the moment. We have some people working on it to make it come true. That’s our biggest goal at the moment. I hope that it will become a reality but you never know how long it might take.

Would you ever experiment with your music (violins, female vocals or choirs)?

Violins? We don’t have room for them. [laughs] We had some sound effects like church bells or stuff like that but that’s just to increase the mood of our music. We also had some choirs in the background but we try to keep everything as simple and basic as possible because in the live environment you can’t use all that stuff without having computers. Two guitars, bass and drums that's all Vomitory is about.

And that’s the way it was meant to be...

I think so too. That’s what makes a band’s core to start with.

Thank you for your support and this great interview. If you’re into death metal check out our new album you won’t be disappointed. One day we hope to come to States and show all our fans how the real Swedish death metal is played.