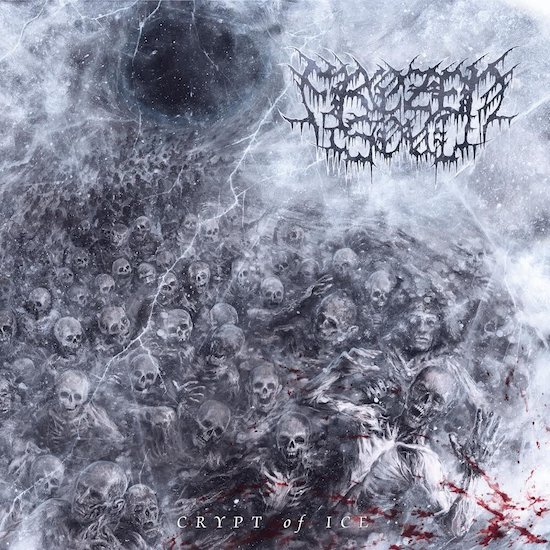 Whoa, this year is off to a very cool start!!! Frozen Soul are a relatively new band (founded in 2018) but they have grabbed me with their new (and very first) album which ended up directly in my current playlist and in one of the front places. Respect!!!

But let's start from the beginning. After a short intro, the first track starts with ultra brutal old school death metal and vocals that make your marrow freeze in your bones. The singer reminds me quite of old Bolt Thrower at "Realm of Chaos" times, quite dark and somehow also spreading an icy atmosphere. The voice is a mixture of death metal grunts and whispers. The song structures of the album also often make me think of old Bolt Thrower. 'Hand of Vengeance' could well be on "Realm of Chaos", though the slower parts also keep reminding me of the old death doom band Winter (R.I.P.). I wonder why? By the way, Frozen Soul have a female bass player on board just like Bolt Thrower did back then.

The band skillfully manages to vary the tempos in their tracks in such a way that each track offers a surprise and doesn't seem monotonous. Personally, I find the changes between ultra slow and quite fast passages very appealing. What I find remarkable about the songs, even after repeated listening, is that the band always manages to pick up speed again when you think the song is over. Especially the track 'Encased in Ice' is such a case. Here you should definitely know the video to understand the slightly disturbing sounds in the middle part. 'Wraith of Death' is another song that convinces with its varied passages. Here, too, Bolt Thrower structures often prevail, but they are excellently developed by their own ideas.

The lyrics of the album are surprisingly about frost, death and supernatural things. The band manages through the gloomy song arrangements, coupled with gripping intros (just listen to 'Hand of Vengeance') as well as the icy breathed vocals, to bring across this atmosphere, which the songs are supposed to create lyrically, on an acoustic level as well. Maybe it's because of the season and the associated temperatures, but I will certainly listen to the album to cool down in the summer, when the northern hemisphere will again groan under new heat records. I think with a cool drink Crypt of Ice will also then serve well to refresh.