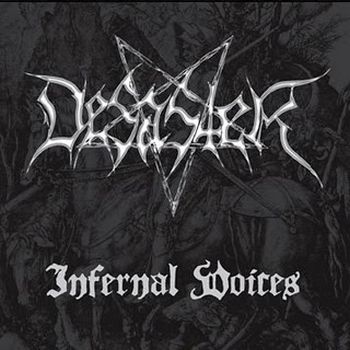 Desaster never disappoint their followers, they always stick to their guns. This also applies to this EP, though it is not a highlight in Desaster’s discography.

The band wanted to release this EP to have published something similar to Sodom's "Expurse of Sodomy". So much for the theory. But back in 1987, Sodom released three epochal new tracks. By contrast, Desaster skimp on first published tunes. 'Fields of Triumph' appeared on their debut. And as everyone knows, the cover song 'Before the Creation of Time' honors Unleashed. Subject to these conditions, Desaster fought a losing battle in comparison with Tom Angelripper's battalion.

Nevertheless, the title track is a good standard. But on closer examination, this song might be the sole reason for buying this EP. In such circumstances, Desaster should have offered more than decent riffs, a solid chorus and the typical demonic vocals. Somehow the song just feels semi-finished. Perhaps this is due to its short play time of three minutes. So let us focus on the B-Side.

The re-edition of 'Fields of Triumph' might make sense due to the blurred production of the debut. But to be clear, I would have preferred a second new track, even if 'Fields of Triumph' is a further example of Desaster’s finest trademark. They combine a medieval melody with malicious thrash and the result is very impressive - not least because of the powerful production.

Cover songs should be forbidden. Anyway, Desaster have increased the speed of Unleashed's classic and it is still an outstanding song. But first and foremost Unleashed deserve the praise.

One last note: the association with Sodom's legendary EP is emphasized by the simple, timeless design of the cover.