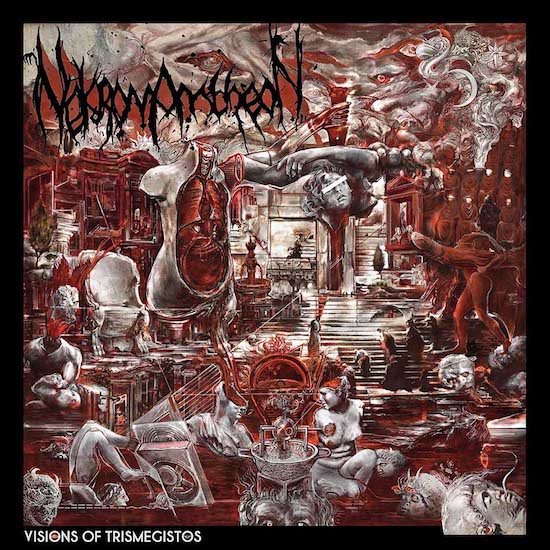 Death to false metal has always been a good dogma and therefore I am really happy that Nekromantheon deliver on their comeback album anything but vntrve sovnds. Instead, Visions Of Trismegistos explains the horrifying rules of Norwegian black thrash impressively. It needs less than 33 minutes to leave no question unanswered. To listen to this work is as comfortable as a bath in glass wool or ten pieces of sandpaper passed through the anus. (I think so, but I admit I did not gain any practical experience with it so far.) The dudes of Nekromantheon attack incessantly in the most disgusting way. Any form of harmonies is either absent or lies well hidden under many layers of defiant noise. Smooth guitar lines can be used by posers of all kind, but lead vocalist / guitar murderer Arild and his two partners in crime have different plans. Admittedly, they fall victim to a weak moment at the first minute of 'Scorched Death'. Its beginning surprises with an atmospheric intro. (By the way, the guitar at the beginning seems to be stolen from Viking’s “Killer Unleashed”, but that’s surely an coincidence.) But Nekromantheon end this unexpected phase of clemency pretty soon with a razor-sharp, impulsive riff that motivates the drums to give full speed ahead. Arild’s commanding voice adds another element of cruelty and all in all, there can be no doubt that this track represents the typical style of the band in a good way.

Leaving the natural ugliness of Nekromantheon’s art out of consideration, the main ingredient of the material is the juvenile energy of the band. The guys seem to suffer from an overdose of adrenalin and testosterone and the great number of musical ideas leads to song structures which are sometimes slightly difficult to decode. Of course, Visions Of Trismegistos is miles away from any form of progressive metal, but do also not expect catchy or accessible parts. It needs time to find a way through the thicket of meanly sawing riffs, harsh vocals and devastating drums. The solos don’t make it easier for the listener to get access. Most of them, for example that of 'Dead Temples', border on sheer insanity. The production supports this feature, because 'The Visions Of Trismegistos' finds a casual balance between unstoppable power and a cool degree of unclean sounds. Nekromantheon are light years away from boring the audience with a sterile mix, but they also do not satisfy those guys who think that an ugly underground production is essential for providing ugly underground music with the correct framework.

Unfortunately, I cannot say that the album marks a new milestone in terms of blackened thrash. It’s a good work, but every now and then single parts of the songs remain relatively ineffective. They are not bad and ensure a pleasant background noise, but they do not fulfil highest demands. This circumstance results in the fact that I am unable to identify outstanding highlights. Don’t get me wrong, all songs avoid grave defects, they provide furious ferocity and the Norwegians attack restlessly. Nevertheless, the final kick is missing, the component that separates excellent classics from good albums. However, Visions Of Trismegistos is a proper assault against false metal and this alone makes the album recommendable.

Does anyone else remember Wayne's World? The scene with Garth in the basement when he says "We fear change" while hitting that robot hand like a lunatic? I think that's how the guys from Nekromantheon would react if they were told to change their tried and true style.

Okay, this introduction already tells everyone who knows the two previous albums before Visions of Trismegistos what the listener has to expect. It is quite remarkable that the band managed not to create any significant changes in their songs in the last 9 (!) years of not releasing an album. Nekromantheon play their unchanged brutal black thrash metal without making any compromises.

Lyrically, the album is about the gods of ancient Greece and Egypt, combined with many myths and dark fantasies, which is also well reflected by the somewhat disturbing cover.

Musically, the Norwegians offer us a pretty punchy half hour of first-class black thrash, which is played up at a breathtaking pace throughout almost all songs. The sawing guitars mill into the ear and the drummer beats up his drum kit as if it had stolen the last toilet paper rolls in the first lockdown. Singer Arild sounds hilariously pissed off and it all makes for a top notch album for a bad day. Stylistically, it wanders along old Slayer paths, mixed with Scandinavian influences from bands like Aura Noir or Condor.

To highlight a few songs, while I find the album as a whole completely convincing, I would first mention 'Seven Rulers of Fate'. You can find pretty sick guitar solos here as well as some really cool arranged breaks. 'Dead Temples' gives a certain Slayer-feeling (at least I feel it) reminding of "Hell Awaits" in parts. 'Zealot Reign' convinces with almost classic melody arcs and a somewhat slowed down tempo in parts. With 'Neptune Descent' the guys have created their longest song so far. This beast lasts almost 5 1/2 minutes and it is also located somewhere in the mid-tempo range. 'Faustian Rites' adds to the crowning conclusion and awakes wistful thoughts of past Slayer albums again, only the end sounds a little rushed.

Are there questions still? No? Good, then write Visions of Trismegistos on the shopping list and get it as soon as possible!!!