After 9 long years the Norwegian band Nekromantheon has finally managed to record and release their absolutely high-quality follow-up to "Rise, Vulcan Spectre" (review here). I decided to ask bassist/singer Sindre Solem and drummer Christian "Kick" Holm about the album and the result is an interview below. 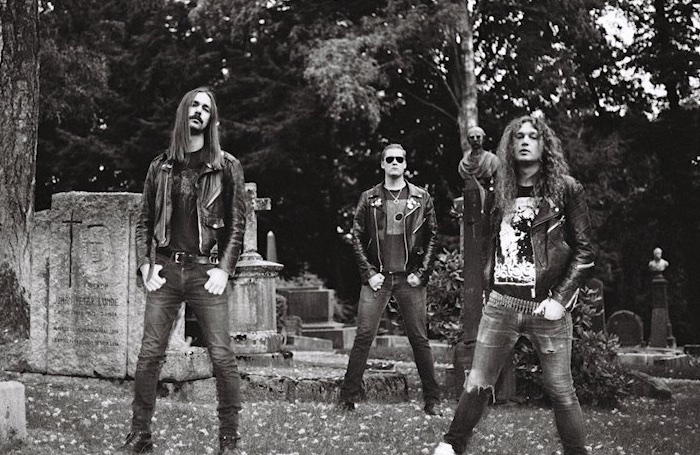 Hi, how are you? Thank you for taking the time for this interview.

Thank you! All good here, considering the circumstances.

With "Visions Of Trismegistos" you have your third album at the start. The last album "Rise, Vulcan Spectre" is already 9 years old. What have you done in all this time? Why did it take so long to record a successor?

Sindre: We have been playing live with both Nekromantheon and other projects, written and released albums with other projects and we've had other obligations in life. We also have a somewhat unrealistic ideal of what thrash metal should be, and hence what Nekromantheon should be, so the writing process and elimination process (throwing away riff reprocess) are somewhat of an ordeal. Thrash metal has to be perfectly imperfect, otherwise it will get boring. Quality over quantity though, it takes the time it takes.

Musically you have only changed something in nuances at most and I think that you have incorporated more classic Slayer riffs and have a little more dramaturgy in the songs.... would you agree?

Sindre: Depends what you mean by classic Slayer riffs, as we have moved much further away from the "worship/heavily influenced" than we were before. But it's a more worked through and dynamic record, and in my opinion darker and more sinister strain of thrash metal.

What would you consider as your biggest musical influences? And what are the most important albums for you that influenced you?

Sindre: On this record we've been trying to focus inwards, as we have the inspiration such in our spine, but we are and have been inspired a lot by early Slayer, Destruction, Possessed, Sadus, Voivod, Dark Angel etc, but also more underground stuff like the Poison demo, Vader demos, Pentagram from Chile, Fantom Warrior demo etc. etc. Some of the most important albums for us are: Slayer "Hell Awaits", Dark Angel "Darkness Descends", Destruction "Infernal Overkill", Possessed "Beyond The Gates".

You have always thematized ancient Greece and its mythology. Where does the interest in that come from?

Kick: I've been fascinated by mythology all my life and have recently started studying intellectual history and philosophy at the university in order to delve deeper into these subjects. Mythology has always been a major motive in any artform, probably because it provides a universe of symbols and metaphors that can be grasped intuitively. The choice of using Greek mythology in Nekromantheon stems from a desire to distance ourselves from the overuse of Norse mythology in the black metal scene. We wanted to use mythology in our lyrics but didn't want to jump on the Viking-bandwagon. The ancient Greek mythology is just as dark and evil, probably even more so.

Are you also interested in Greek philosophy or is it primarily about ancient mythology?

Kick: I'm very interested in philosophy in general, and philosophy of mind in particular. The ancient Greeks had some fascinating ideas about the workings of the mind, especially the neo-platonic thinkers like Plotinus, Iamblichus, and Hermes Trismegistos. Even though I don't subscribe to the substance dualism of Plato and his followers, I think there is a deeper way of reading these works that can produce insight even in a purely secular worldview.

This time Trismegistos, who represents a fusion of the Greek god Hermes with the ancient Egyptian god Thoth, had to serve for your album title. Can you go a little bit more into detail about the title?

Kick: For us, Trismegistos serves as a personification of a forgotten, neo-platonic tradition of mysticism, secret knowledge, and deification. These are the things that the church fears the most because they can dispel its illusion of power. Bringing attention to such practices is an attack on the church's hegemony, and many heretics have been burned for things like this throughout the ages. And of course, heresy and thrash metal are a great combination. But the main purpose of the lyrics is to add a sinister aura to the music and produce images in the mind of the listener.

What is the main topic of the album? Is there a concept behind it? When I have a look at the lyrics, let's say for example at 'Faustian Rites', the lyrics are quite difficult to understand if you don't have a certain background about ancient gods and mythology.

Kick: Many of the songs are about the traditions mentioned above, so I guess you could say that's the main topic of this album, but each song approaches the subject from a different perspective. I realize some of the songs have many obscure references which may be hard to grasp the meaning of, but I try not to be too explicit about what I'm trying to express, in order to allow the listener some room for imagination and anagogic interpretation. The lyrics don't make a lot of sense if taken literally. We use mythology as a foundation for symbolism and metaphors, which I suppose is the way it has always been intended. Explaining every thought in utter detail would be like turning on the lights while watching a horror movie – it removes the mystery and obscurity. Besides, the hermetic tradition which influences this album is not based on syllogisms and analytic logic, it's all about symbolism and imagery. In the words of the Three Initiates: "The lips of wisdom are closed, except to the ears of Understanding."

Two of your band members are also active in Obliteration. Is there any news from there regarding a new album?

Sindre: No, not really. The pandemic has left Obliteration in a difficult rehearsal state, so things are moving slow. We have some material, but focus shifted in order to finalize the Nekromantheon record, so it's been quite silent in the Obli camp. More will come surely; we have a lot of shows/festival gigs that were put on hold / postponed etc. that we hope will be back when things open up again..

According to Metal Archives you are part of the Kolbotn Thrashers Union, which also includes Condor and Infernö, who I absolutely adore. Do you have any info about the status of the bands?

Sindre: Great bands but to my knowledge they are both on hold / broken up I'm afraid.

Do we have to wait 9 years again until you release a new album?

Sindre: Maybe! Hehe, it is too early to tell but we have been on a good round writing some new material lately and have new ideas, so let's hope we'll be a bit faster next time around.

The last words are yours!!!

Thrash till death! And support your local record store!