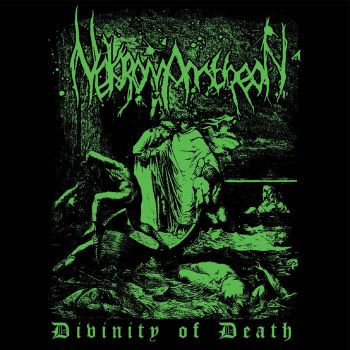 Divinity Of Death is the debut of Nekromantheon, another band that hails from the uncomfortable swamps of Norwegian black thrash. Fans of Aura Noir, Condor or Deathhammer do not need to read more. The three-piece from Kolbotn (is this the town where seemingly every Norwegian lives?) provides the same degree of ugliness, vehemence and chaos. Thus, the dudes will not disappoint the supporters of the aforementioned gangs.

The album has a lot of raging high velocity parts, but tracks like 'Gringo Death', 'Cry Havoc' or 'Divinity Of Death' provide evidence that Nekromantheon also likes some mid-paced rhythms and galloping guitars. These parts show that the might of "Hell Awaits" is still unbroken, because the here presented riffing lies in very close proximity to that of the greatest classic of all. Not the worst point of reference, if you ask me. But the Scandinavians do not wallow in the well steered cruelty that made "Hell Awaits" to a perfect album. Divinity Of Death is like Pandora's Box, each and every plague is released and Nekromantheon sees no sense in taming these evils. They do not even shy away from a 40 seconds track that sounds like a persiflage. 'Lex Talionis' is absurdly fast, the only weak "song" here and I guess it is the privilege of debutants to put such a pretty worthless number on an album.

The vocals do not hail the old school of Destruction's Schmier. High-pitched screams do not occur, the unleashed newcomers prefer harsh and coarse barking. But apart from the overdose of energy, the main feature of this pretty short full-length is its wild, insane and Slayer-inspired guitar work. The drummer has more than enough to do in order to keep up the pace (and to contribute some nice fills), but the guitars deliver dozens of jagged and sharp riffs. They profit from the production which adds another filthy touch to the appearance of the songs. This is the right approach, because high transparency and black thrash have never been close friends, even though the transparent vinyl of the High Roller Records edition looks nice.

Despite all the fury, chaos and vileness, one also finds the necessary amount of melodies. Well, let's say one can identify under the microscope trace elements of melodies, but that's enough to prevent a senseless massacre. Divinity Of Death reveals that the band has a musical potential. It was obviously not their aim to create only total noise, the songs are based on good ideas and this fact, combined with the liveliness of the band's approach, lends the debut an exciting momentum. It does not score with outstanding tracks in abundance, but everybody with a weakness for reckless and violent music will enjoy this record. On the other hand, it goes without saying that this kind of music plays havoc with all these aesthetes who like to discover fine nuances and technical details. But I am no aesthete. I just turn up the volume, enjoy songs such as 'Devolutionary Storms' with its great, almost finger breaking riffs and exercise hyper-banging.