New Wave of Traditional American Heavy Metal band Corners Of Sanctuary (COS) was formed in 2011 with a desire to bring back the sounds of classic heavy metal. Many albums and tours later the band is very much alive signed with US' RFL Records in June 2020. Corners Of Sanctuary released another piece of heavy metal greatness In October 2020 with album titled "Heroes Never Die" and the newest piece of music and something you should put your ears to is an EP called "Blood and Steel: Volume One". It was just released in March 2021 so we caught up with guitarist/keyboardist Mick Michaels to get more info about what the band has been up to. 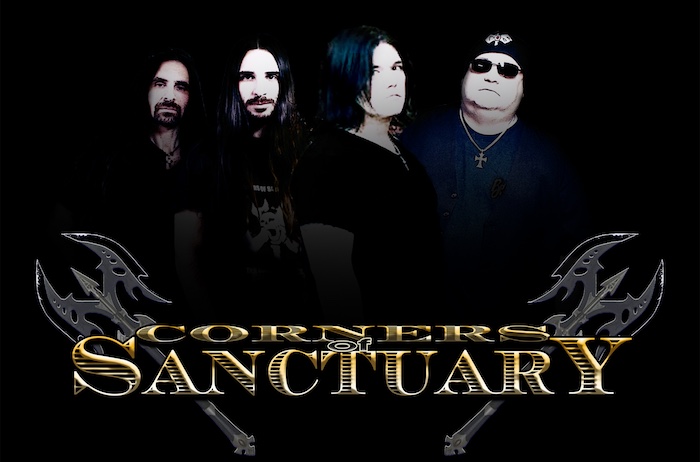 Thanks for taking time to talk to us. New EP was just released, how's the excitement level, how is everyone doing?

Thanks so much for inviting me to talk…greatly appreciate it! With any release, a lot goes into it to make all come together…it's a non-stop process until it's done. And even then, there's still so much to do…with promoting the release, getting a single out there, making a video of some kind…posting, sharing, networking…one campaign runs into the next. There is always something to do. But at the moment we are really excited about the new EP, Blood And Steel: Volume One. It's out now and available on RFL Records.

"Blood And Steel: Volume One" just came out. Can you tell us a bit about it, how long did you work on it and about the whole process?

All in all, it took about four months to put this new EP together. We had started writing for the EP while we were pre-promoting our last album, Heroes Never Die. As busy as that time was, it actually was a great time to write as there was so much energy floating around…so everyone was already in work mode, which made the focus that much more laser sharp.

And to compare, how long did you work on the band's latest album, "Heroes Never Die", which was released in 2020? Can you tell us about it, about the recording itself, and how satisfied were you with the outcome?

It took us a number of years to complete the album due to touring and schedules. We actually started the album in 2016 when we were working on our previous record, The Galloping Hordes. We actually planned to do a double album at that time, so we started to lay tracks for two albums worth of material. Early on, however, we decided that was not the route to go…so we shelved the tracks we weren't going to include on Hordes. Hordes released in 2018 and we had shortly after started working on the next album which would become Heroes Never Die. The pandemic actually allotted us time to complete the album and have it release last year.

Production wise the album is stellar. The overall mix is top shelf. Bill Metoyer did a fantastic job mastering all the tracks…we have had the opportunity to work with Bill several times over the years and he always delivers phenomenal work.

How would you introduce the new EP?

This EP has a lot of punch to it…so we think listeners will like it. It's a bit darker and grittier…really has an edge to it. It definitely relays a lot of the feelings many of us have been experiencing over the course of the last 12 months with the pandemic and all.

Is there a deeper meaning behind the title?

2021 marks Corners Of Sanctuary's 10th year anniversary. So this EP, along with two more upcoming editions, commemorates that milestone for us. The title, Blood And Steel is a sentiment that, for us, we feel describes our commitment to what we are doing…our dedication to the music…it's all or nothing.

And what is the story behind the name of the band?

What inspires you to write, to compose, what is the main catalyst?

For us, it's always about the music first and foremost…what's best for the song…that's always how we approach what we do; writing, recording, promoting, etc. With that sort of frame of mind, you start to realize what you are looking forward to and avoid what you don't.

Blood And Steel was inspired by our wanting to pay tribute to two former band mates who passed away over the last year. As we approached our 10-year anniversary as a band, we started to reflect on not only all that you have gained but what we may have lost as well. This EP and the ones that follow, encompass all of that. It's a celebration of everything that brought us to this moment.

Influence comes from so many places, especially for an artist...it's all around us; every day. We just need to be open to it and become aware...from there it's just a matter of taking it all in and doing something with it…the possibilities are endless if you think about. As an individual and with this band, we have a number of influences both metal and non-metal. Having only a singular source is living and creating with tunnel vision. The world is more than just that as is art and music.

What do you think about people slapping names and tags on music?

It's two-fold as it creates individualism for artists and bands that are currently swimming in a sea of 60K uploads to Spotify daily, while at the same time, seems to be causing more and more separation among not only the listeners but the artists themselves. Sub-genres are a way to help sell and market things as "one-of-a-kinds" and they are also ways to help appease people's need to be different. At times, it seems people get so locked into this genre or that genre that they don't allow themselves to experience things for what they are or even what they could be…genres are limiting in my opinion. Of course, everyone will gravitate towards what they like but some choose never to explore other avenues…which they should, ‘cause a change of scenery can do us all some good every once in a while. 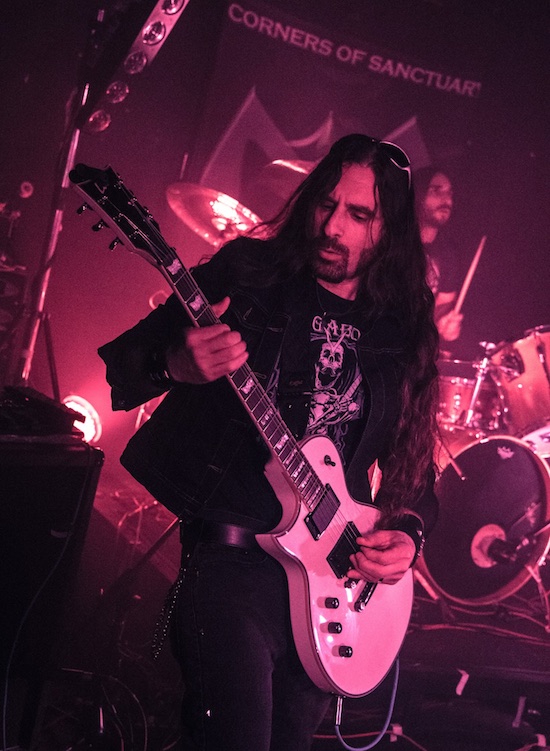 Corner Of sanctuary's music has been called the "modern sound of Classic Heavy Metal." It's categorized as New Wave of Traditional American Heavy Metal. We definitely have a throwback flavor to our sound and that is part of the genetic makeup of what Corners Of Sanctuary is and set out to be...it's a ripple effect of all our influences and the type of music we love to hear, so it makes sense it would be the type of music we want to write and play. To us, however, it's heavy metal. Call it whatever you like…whatever works for you works for us. If you're listening, that's all that really matters.

Music for me is a magic carpet ride…you never really know where it will take you. I have been fortunate to have been able to work with some great talents over the years, collaborated with some really cool artists and have traveled about parts of the world all because of music. It's just amazing! So, to me, it doesn't really matter what you call it. If I like, I like…if I don't, I don't, and genre has nothing to do with it.

Who do you write and play for?

I create music because it's a part of me; it's something that seems to be genetic to my nature. And because of that, it's creation is initially for me. However, as with any artist, there is a need to share what we have created with others. So I guess in the grand scheme of things, it's a combination of both.

Expectation of others is not a healthy environment to be in and often leads to disappointment, whether it's from others or ourselves. So, I have no expectations from the listeners. I do hope, however, that they enjoy some of what this band does, and I leave it at that.

Creating is a means to preserve and to build…I'm not a fan of destroying anything.

What about emotions? Which do you have plenty of and which ones not enough?

Being an artist who writes songs, I feel that there is a good amount of "emotional tapping into" that exists…otherwise it would be difficult to express myself in both lyric and music. We all have those feelings that we tend to avoid when possible and others we look to embrace more often…almost searching out opportunities to experience them. If clam is an emotion or state of being, that's what I would want more of.

I think, if the world as we know it was devoid of music, that is, never knowing of its existence, then we would have come to claim some other form of expression…if the world as we know it today all of a sudden experienced a loss of music, it would be a tragedy. Music is its own language and is often devalued as a hobby or as something we hear in the background. But on the contrary, it's far more valuable than anyone gives it credit for…music is a lifeline to so many people…the old saying that "music soothes the savage beast"…that's actually referring to the beast in all of us…that primal essence that lives and breathes deep inside…without music we would not be complete and the savage would reign.

Where do you see yourself and the band in the next 5-7 years? What are the plans for the future?

We definitely still plan on doing what we are doing now, and that's making music…. There's always a plan in motion, but in this business anything can change in a heartbeat…just look at 2020. We plan to stay true to the course and weather the storm as it comes.

Just to keep on making the best music we can…but at the moment, we plan to follow up our Blood And Steel: Volume One EP with two more editions this year; one in the summer and another in the fall.

We've also begun work on our next full-length album titled Vengeance Of The Fallen. We look to have it released sometime in 2022.

In addition to a number of online streaming events, like the Metal May I Fest in May, we are starting to book a few one off live shows as things are beginning to open up here and there. Our first show is in late April as we are part of the Metal for Autism Fest in Philadelphia. We plan to take it slow though…but once all is back to well, we hope to get back out on the road and make up for lost time.

CD, vinyl and cassette. What is your opinion about the physical media, which one do you prefer?

I think vinyl and cassettes are awesome and really give the music presentation an authentic look and feel. I always loved cassettes; there was something about them that always made heavy metal music sound amazing. Vinyl is cool because it seems to still validate things for a band…that if a release has gone to vinyl, there is something "classic" about it. People still buy CDs at shows…whether they want to actually listen to them, or just to take a piece of the band home with them, CDs are still a value asset to the merch and catalog package.

Thanks so much for talking with me, it's been a pleasure. Appreciate your time and support and wish you and your readers all the best! Stay strong, be safe and COSnROLL\m/\m/