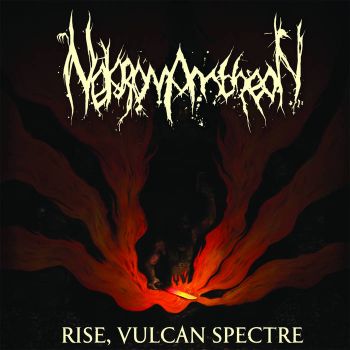 An intelligent guy of the marketing department has a message for us. Rise, Vulcan Spectre is "for fans of old Sepultura, Slayer, Sadus and Sacrifice". Of course... Either he did not know any metal bands whose names do not begin with a "S" or he was just an ignorant idiot that had no clue at all. Admittedly, these options are not mutually exclusive. However, the most obvious band name is missing. Aura Noir, compatriots of Nekromantheon, seem to be an enormous influence for Fenriz' neighbours from Kolbotn. Filthy and mean black thrash is the only item on their musical agenda, and their way of execution puts Rise, Vulcan Spectre in close proximity to albums such as "The Merciless" or "Out to Die". The vibes of these efforts are very well comparable with each other. Yet Aura Noir does not have a monopoly in terms of sordid Norwegian sounds. Better still, the energy of Nekromantheon alone justifies the publication of their second full-length. But, let's be quite clear about that, this is not the only advantage of Rise, Vulcan Spectre.

Inter alia due to the intentionally shabby and exactly suitable sound, which is focussed on the essentials, Nekromantheon's approach does not lack restless fierceness and radical perfidy. Their guitar sound has the charm of a dentist's drill and lead vocalist Arild does not express his love for the human kind, to say it mildly. He spits out his vulgarities with a lot of reverb on his voice. The contempt, which is immanent to this bastard genre, is very well reflected by his articulation. Arild's generic rawness matches the equally coarse instrumental performance. Nekromantheon do not shy away from high velocities, although blast beats do not show up. Hymnal mid-tempo parts are not forbidden, but they do not characterise the overall impression. The otherwise stormy opener with its brief pretty majestic ending sets the direction.

Just a small complaint: all songs are really good. Okay, this does not sound like a complaint, but let's express it differently. I miss two or three highlights, killer pieces, that I want to hear again and again. Even the sub genres of musical rebels need a minimal quantum of catchiness, but this feature comes off badly, at least to some extent. Thus, the album's most memorable moment is the transition from 'The Usurper Command' to the title track. Lo and behold, the band is familiar with an album called "Reign in Blood", especially with the beginning of its title track with thunderstorm and eerily howling guitars.

The album kicks any kind of complexity in the ass without boring the listener in the form of overly simple song patterns. It clocks in at 31 minutes and this compact portion of black thrash convinces with authenticity, dedication and historical awareness. The closer therefore fades out with a sequence that combines the ending of Bathory's "Of Doom......" with the last part of Slayer's "Hardening of the Arteries" and this stomping outro appears as a homage of the Norwegians to the old Gods of black and thrash metal. Yes, I am usually rather a purist, but pure thrash and pure black metal do not create an indecent cocktail. I would rather speak of a double dose of pureness. This sounds idiotic? I agree - but it is not more moronic than to say that Nekromantheon stands in the tradition of Sadus or Sacrifice.