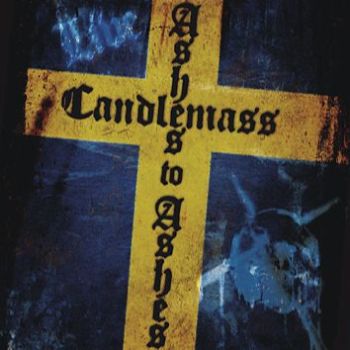 Swedish doom metal masters Candlemass offer up a live séance-like effort of live proportion in its recent release Ashes to Ashes. It’s an hour-long somberness that delivers exactly what you might expect from a band of the Candlemass echelon. Recorded at the Sweden Rock Fest, Ashes... spreads out over the plains (of your room, no doubt) like a caustic shroud of thick hellish smoke.

I know it’s the ultimate sacrilege to say it, but here goes: I prefer Robert Lowe to Messiah Marcolin all day long. Maybe it’s the lack of total theatrics in Lowe’s delivery; in fact, yeah, that’s pretty much it in a nutshell. I loved Lowe’s work in Solitude (Aeturnus) and for me his vocal is akin to Lee Dorian, Eric Wagner and Ronnie James Dio in that it just soars effortlessly, painlessly without need for over-exuberance or pretense. When he sings it’s just that, a vocalization conducive to the underlying music and it’s a perfect fit. He handles both old and new songs with relative ease, as well he should be a seasoned veteran himself.

The band is on, man, flawlessly plowing through new soon-to-be classics like 'If I Ever Die' and 'The Bleeding Baroness' with all of the tenacity of an eighteen-year-old boy at Glamourcon. The production is sharp and full, adding a lush layer of bass accordingly as you take in a terrific mix of guitars and drums happily co-existing. There’s of course ample respect paid to the classics in the Candlemass arsenal as well, including emotionally dismantling versions of 'Solitude', 'At the Gallows End' and one hell of a cover version of Rainbow’s 'Kill the King' - the last three live albums I reviewed that were this resonating were the Onslaught and Exodus records. The crowd sounds somewhat enthusiastic, but it’s hard to really gauge it from the audio portion, but it doesn’t matter since Candlemass was there to provide the ultimate down experience in the most uplifting manner possible.

When I hear Ashes to Ashes it doesn’t even sound like a live album so much as an under-polished studio album, which is pretty good considering how many bands can’t seal the deal in a live setting. It all seems too easy, but with great talent comes the bosom of comfort ability. I am glad Candlemass is still kicking around the doom tunes for as long as they have now. These upstarts in the doom genre can use a blueprint from which to build, and Candlemass is the design.