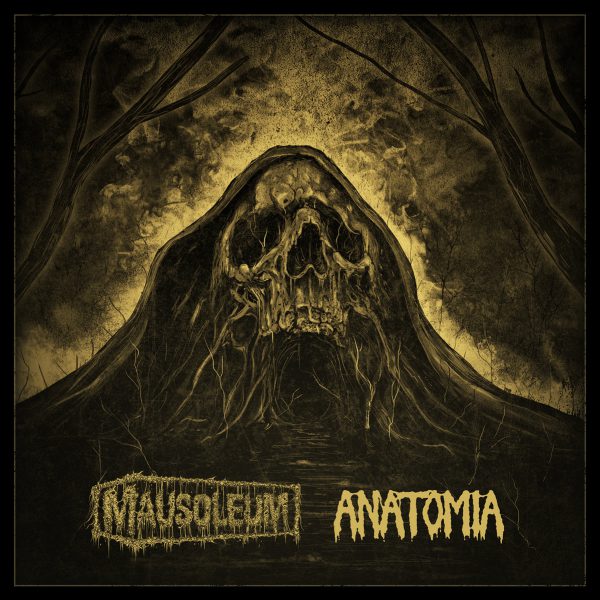 Man I feel so sorry for Mausoleum, the sweethearts decided it would be a good idea to appear on a split with the Japanese death/doom butchers Anatomia. Not that their musical contribution on the split was lackluster or bad or anything negative, it's just Anatomnia's 3 songs on the split totally steal the show to a point in which it no longer appears to be a split between two bands. Mausoleum is from the United States and they've been around since 2001. They possess quite a wealth of experience within their lineup in which current members have had their hands in bands such as Incantation, Disma, Morpheus Descends and Geheena, hence there is no questioning the skills of this group. The 4 tunes they offer here are old school to the rotten core. You're going to love tracks like 'Voices From Beyond' and 'The Dark Abysmal'. Thrashing craziness, slugging doom metal movements and brass knuckle fist to the face mid tempo swings. You can't go wrong. For fans the thrash era during its deadly transformation into death metal will appreciate every bit of Mausoleum's work on the split.

Anatomia, what else can be said about the death/doom Godzilla that has not already been said. Every-time they raise their ugly heads from the swamps of Japan, the very same result could be guaranteed and evidently comes to fruition. Cavernous growling from the deepest depths of nowhere, bone crushing guitar motions and absolutely lifeless doom metal heaviness. Godless the incantations being 'Mangled Flesh', 'Rotting Innards' and the mystical, murky, mesmerizing yet inanimate 'In the Crypt'. The many faces of evil combined into 3 tracks of disastrous decadence. I hope this is a taste of what's to come from a future full length followup to Cranial Obsession, it's been too damn long since the release of that terror. Nonetheless, this split will suffice nicely until the next installment. It would also be great if Mausoleum can follow up with something along the lines of what they were able to offer here. Sick things seem to be on the horizon.