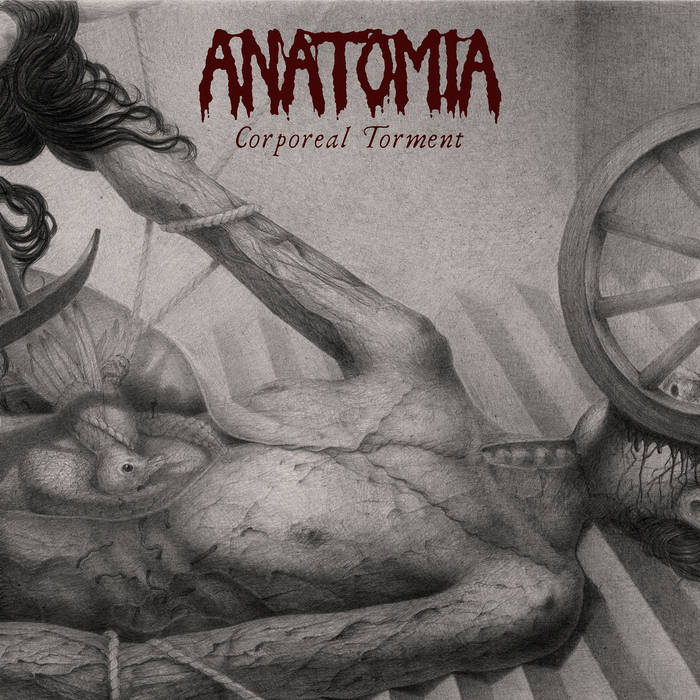 Having already cultivated their sound in death metal and expanded their reach considerably, Anatomia still remains somewhat of a rarity to the genre. Hence there is no band quite the likes of Anatomia, in terms of consistency, creativity and discipline. Their contributions to death metal go unmatched, unparalleled and uncontested. Cranial Obsession still stands out as their best work; however, it does not do so by a great margin given Anatomia's entire catalogue is filled with praised pieces of death/doom. And though the band has existed for such a long time and has garnered much respect, they've never excused themselves from striving for betterment or nor did they ever become complacent.

What is Corporeal Torment? Simply put, the next chapter in a grueling history of Anatomia’s depraved death/doom; thematically, a great question put forth surrounding the existence beyond the physical. Erecting a sonic representation of such a provocative question would be a grand undertaking, one that would help to test the instrumental and atmospheric proficiencies of the Japanese death/doom giant. Granted that even for a veteran band with so many quality split releases enough to collectively form perhaps 6+ albums, you’d expect their next effort to be an easy undertaking; however when you factor in the weight of the concept behind such an album then you have a real task to tackle even for a death/doom titan.

What has always stood out about Anatomia is their ability to create a believable atmosphere and to make each album and EP sound like a procession and progression towards a particular state. Rather than just playing some death metal tunes, Anatomia has the gift of creating a sort of intimacy within the music itself, thus operating at an angle that facilitates for maximum immersion. The way each vocal and instrumental note is crafted evokes a feeling of watching a master painter at work. You stare baffled by the diligence of every stroke of the brush and how simplicity unfolds to a thing of heavy substance. Timeless are the riffs, muscular abyssal vocals, and moans of anguish that fall into the tormenting template of basslines and mystic atmospheric pressures while continuously and meticulously being anointed by a seemingly esoteric lineage of death/doom ancestry.

From the trance inducing yet brutal disfigurement that is ‘Dismemberment', to the horrifying and transcendental ‘Mortem', you’re not given the privilege to skip any entry without missing a key moment of Corporeal Torment. This is the essence of an Anatomia record, it reflects that of a scholarly study through chapters of a complex topic that would prove to be instrumental in the final summation or conclusion connected to the subject’s thesis.

Moving about with an adept foot, these songs never fail to reinforce the gravity and sheer magnitude of such a topic through applying the principled fundamentals of the sub-genre passed-down by Disembowelment, Autopsy, etc…; all the while applying Anatomia's own signature touch of bouldering, guttural maws, nasty bellows, a sea-saw of sometimes sporadic depressions into lifeless funereal territories and swift, precise swings at thrashing death metal. Like a ‘Slime Of Putrescence' or ‘Despaired Void' would lay nearly dormant with its restrained, stagnant and sluggish clawing from the jaws of despair then find a sudden energetic, resuscitating burst of rhythmic climax only to once again lower its guard and submit to an inescapable adversary, these tracks demonstrate and give near perfect rendition to a mental oppression leading to vacuuming of a still debated existence beyond that of a fleshy husk.

The tendrils of a philosophical burden stretched to musical form, Corporeal Torment with a creaking motion carves out of the earth and paranormal, a corporeal and cerebral confinement. A Dark Descent product of disgust, dismay and disaster.