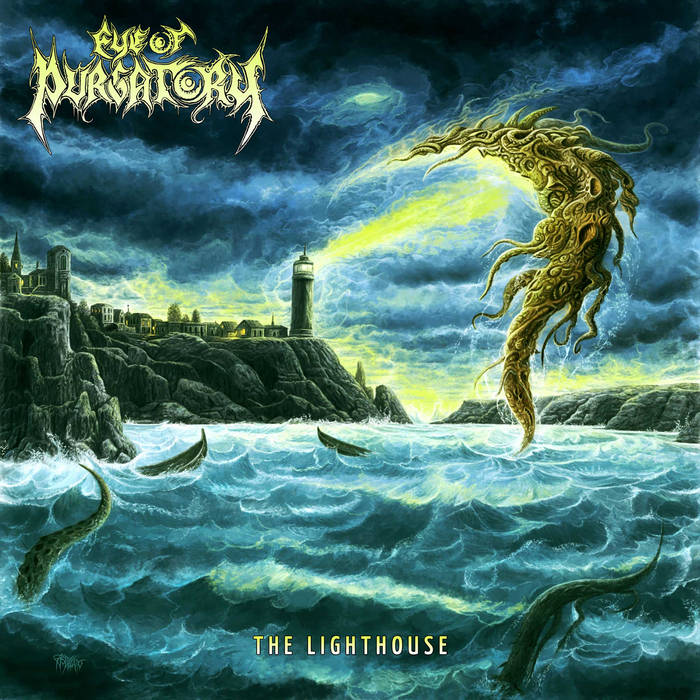 Rogga Johansson is having a phenomenal run in the Swedish death metal soundscape. It was only a few months ago he steered the direction of side project Revolting that saw massive success with the release of The Shadow At The World's End. Now he is back once more to captain the ship on Eye of Purgatory's 2nd full-length album The Lighthouse; and man what a marvelous job he was able to pull off this time also in steady winning momentum as demonstrated with Revolting. The guy is like salt when it comes to death metal, you can't find a band or project he hasn't touched in Sweden. His presence in metal is a gift and The Lighthouse as with so many other albums makes this implication.

The Lighthouse is a very good installment to the project being Eye of Purgatory, it takes Swedish death metal and mixes it with 2nd wave black metal melodies done in Dissection style. The two strongholds of the Swedish metal domain meet in graceful matrimony to create another memorable piece of death metal. Joined by Taylor Nordberg (guitars/keys/drums) and Jeramie Kling (bass) both of which are involved in several acts, help to formulate the shape and story of this death metal tale. And while it may be nothing revolutionary, credit has to be bestowed upon these individuals for the fine job done on the album.

Spanning about 35 minutes, The Lighthouse assaults the ears with sweet melodic passages and rhythms that'd almost bring you to tears before the end of the journey. Eerie pieces are also added to the fabric of The Lighthouse along with almost middle eastern sounds to broaden the sonic aspect of the material. And with the signature Swedish death metal writing style being handled by the wealth of experience of Rogga, there could be no flaw, shortcoming, or misstep in the shaping of the music.

Following the epic 80s styled synthwave introduction of 'And From the Fog', no time is wasted as things are off to a fiery start. Title track 'The Lighthouse' paints the soundscape with a sensational opening that features fast and tight drumming to go along with the blackened melodic sweep of the guitars. Already hooking in the listener to come along for the full voyage. Making sure that whilst the music plays, you're encompassed and engaged via the flexible structure of the music. Moving from melancholic melodic death metal to eerie compositions on the keyboards to even adventurous black metal sections, these facets are arranged in such a way that the motion is never hindered as they segue into each other smoothly.

While I would say the songwriting on The Shadow At The World's End was top-notch, The Lighthouse eclipses it. With 'Fornever to Awaken', 'Rotting Pathways', and 'They Silently Await' magnifying the effectiveness and providing a bridge of sorts for you to transition back and forth thus emphasizing the connectivity of the music structure-wise. And with the album having such a short runtime paired with the addictive melodies of aforementioned 'The Lighthouse', 'Where Slowly Light Fades' and 'Rotting Pathways', you feel as though you've raced through the music without having covered the smaller fragments of detail on the record.

Proving to be a very productive musician and still skilled one, Rogga's vocals appear to age nicely as his growl still has a mark of refinement that'd complement his riffing and the collective efforts of Taylor and Jeramie. You could not have asked for more from someone this active within death metal. Managing to follow-up and even outdoor prior work not so long ago released with an installment like The Lighthouse, it'd be a crime for the album to not get the recognition it deserves. One of the finer bastions of Swedish death metal, Eye of Purgatory with The Lighthouse reiterates what a true rendition to the glory days of the genre should emit and reflect.