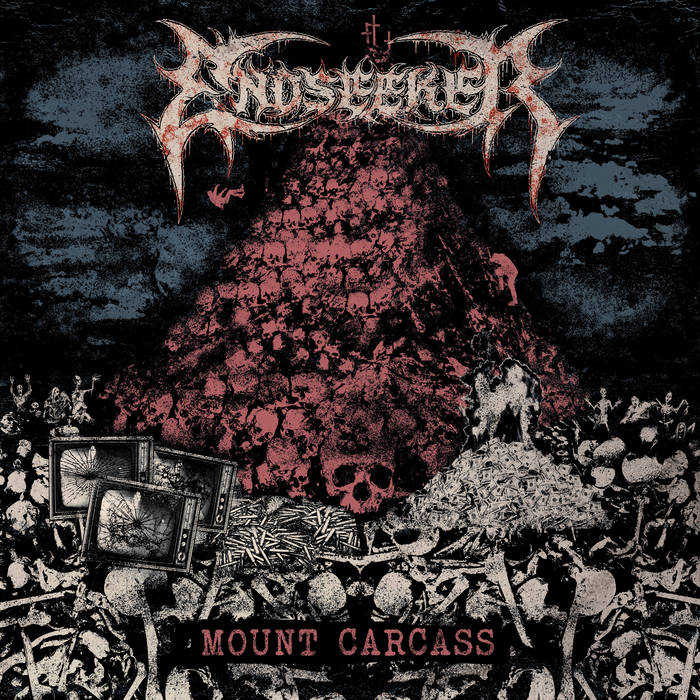 From beautiful Hamburg, Sweden comes the band Endseeker. Oh no, Hamburg is a German city. This is what happens when you sound so Swedish.... Endseeker have released their third album Mount Carcass, a remarkable HM-2 album that outshines many reference works of the last years.

Starting with the opener (somehow logical) 'Unholy Rites', which lets super cool Dismember memorial riffs sound, the ascent of Mount Carcass begins. 'Merciless Tide' won't let go of the listener with its catchy riffs and melodies and again refers to the great old Swedish idols. 'Bloodline' lets off the gas pedal and a little bit of speed and it creeps rather dragging through the boxes, whereby also some really nasty riffs are to be heard here. The title track puts a huge shovel on the tempo again and is probably the fastest and most unmelodic track of the album. 'Cult' impresses with its almost bluesy
riffing, of course, everything in a stinky death metal dress. Black Sabbath meets slow Autopsy somehow. The next two songs also remain on a similarly high level and all sound very varied. Fast HM-2 passages also alternate here with slightly doomy passages and after 8 songs let the listener go exhausted but happy to have climbed the Mount Carcass. As a cover version and breather there is an instrumental, namely 'Escape From New York' from the movie "John Carpenter's Escape From New York". This is quite okay, but I would have found a cover version of a metal song better.

The production is very convincing and powerful, as you would expect from a proper HM-2 disc. Fits, does not wobble.

As a conclusion, it remains for me to state that I am very impressed by the force of this album and convinced that Endseeker have made themselves even more known with this album and I wish that some other bands who have released their albums recently (for example: Revel in Flesh, Fleshcrawl and especially Lik) would have presented themselves just as convincingly. Their latest works would then find their way into my CD player much more often.