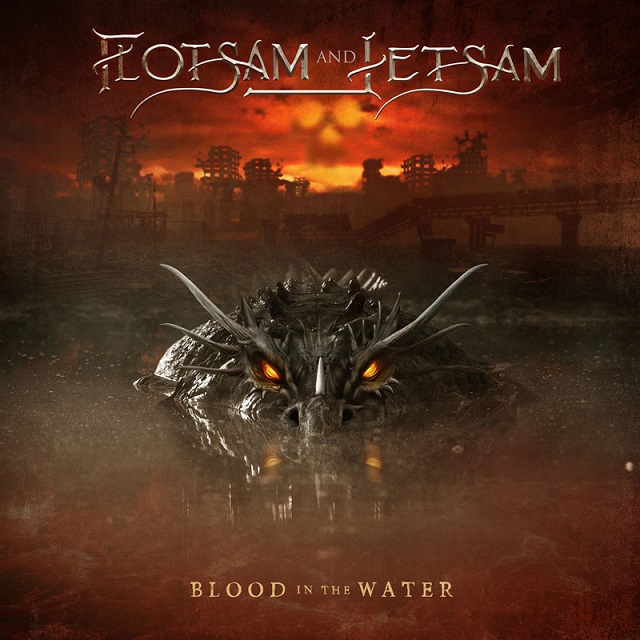 Type: Full-Length
Release Date: June 4th, 2021
Label: AFM Records
Genre: Power, Thrash
1 Blood In The Water
2 Burn The Sky
3 Brace For Impact
4 A Place To Die
5 The Walls
6 Cry For The Dead
7 The Wicked Hour
8 Too Many Lives
9 Grey Dragon
10 Re-aggression
11 Undone
12 Seven Seconds 'Til The End Of The World
MetalBite on YouTube

I'm really grateful to bands like Running Wild, Annihilator and Flotsam And Jetsam. On the one hand, they fired some very strong bullets on their early works ("Gods Of Iron", "I Am In Command", "Dreams Of Death" and others). On the other hand, they all released a bunch of crap as their third album and lost their relevance forever from my point of view. My wallet was happy, it saved it about 30 investments. But do Flotsam And Jetsam really belong in the ranks of combos that have become irrelevant "forever"? To my big surprise, Blood In The Water wants to seriously discuss this question once again.

The title track opens the round of pieces standardised to 4 - 5 minutes in length. After all, it does not lack a certain sharpness. The whole thing sounds a bit like Chastain on dope with a Leather on the microphone, who has lost 25% of her vocal charisma during her transformation into a man. The quintet produces bludgeoning somewhere between power and speed metal, the chorus could be a little less melodic and the drums less blunt - but it's still not bad. In any case, a passable beginning for seemingly reanimated veterans that for several decades have been falling back - or rather have to fall back - on material from the first two records for 90% of their live performances.

There is no need to fear that the climax of the record has already been passed with the first piece. The nearly unbelievably fantastic 'Brace For Impact' is carried by both a sharp-edged, classic riff and an intensive chorus. Lo and behold, a tinge of 1988 blows out of the speakers. Fans of Helstar and comparable US warhorses should have fun here as well as with 'Burn The Sky', especially since the songs are performed quickly, bitingly and without any signs of slackness. But after the first quarter, the album goes astray. Instead of brisk tempo, lacklustre melodies dominate more and more. Flotsam And Jetsam want to score with emotionality and unfortunately remain completely colourless. The low point is 'Walls', whose spectacular harmlessness reminds us that it was probably no coincidence that no work in the last 30 years could even come close to No Place For Disgrace. 'Cry For The Dead' with its loud-quiet dynamic offers a bit more drama, but also remains below the possibilities of a half ballad. It's a pity, because the powerfully produced album would also have provided the right technical framework for a crisp ballad.

'Too Many Lives' puts things back into perspective. A somewhat interwoven riffing, strict verses and a chorus that catches the ear even without a fluffed-up melody help the double bass orgy to a place among the best three tracks on the album. Overkill should write such a good number again, it would fit stylistically well to them. In fact, 'Too Many Lives' heralds another strong section of the record, in which the five-piece from Arizona combines some driving, fast rhythms with aggressive guitar work. The dark and fast-paced 'Dragons' would also have cut a fine figure on Destructor's "Forever In Leather", as would the intense 'Re-aggression' with its siren-like, ominous melodic fragment at the beginning of the verses. The overall result is an album that should have been shortened by two songs in the middle, but which nevertheless offers at least half a dozen blockbusters. I admit that I would not have expected more – quite the opposite. But Blood In The Water doesn't only attract sharks, even old metal freaks like me come out of their holes again and give it a chance. If Running Wild and Annihilator now also (almost) find their old strength again, it will be expensive for me.