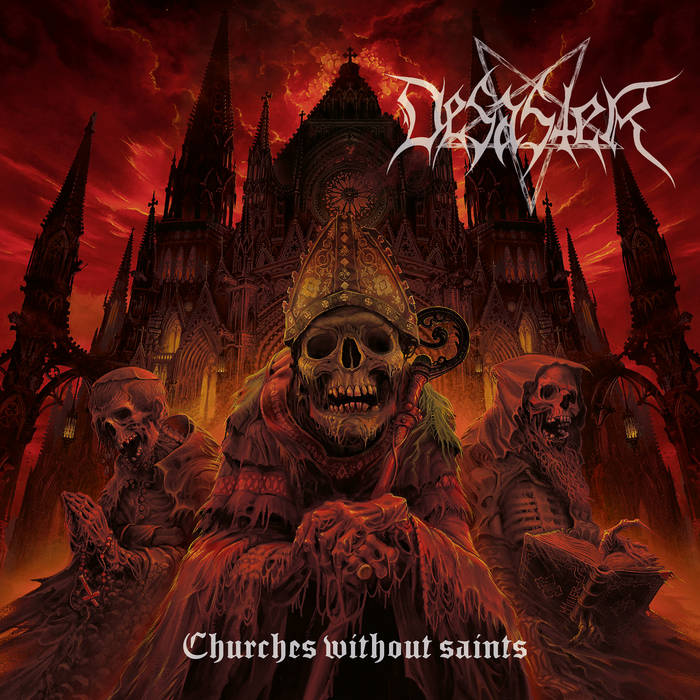 The first thing I noticed about the new Desaster was the sound. Very pressed, very compressed and honestly, quite flat and almost lifeless at times. Well, one gets used to it, but this is not the mix I like to get when it comes to a new album of this black thrash legend. By the way, I am not quite sure anymore whether black thrash is really the right description for the style of the dudes. Since his entry, Sataniac always sounded very powerful and brutal. That's good. But now he seems to focus so much on a brutal performance that this is at the expense of any variability. He increasingly sounds like a death metal singer and this kills previously quite exciting nuances in the band's sound. No doubt, a good singer, but he does not make the best use of his voice from my point of view. But let's turn back the wheel of time for a moment.

I first came into contact with Desaster on the occasion of their debut A Touch Of Medieval Darkness. That happened in the mid-90s, when it was not easy for pure, hard metal to find a hearing. I took the quartet straight to my heart thanks to songs like 'In A Winter Battle' or 'Porter Of Hellgate', but the quiet 'Visions In The Autumn Shades' also had its own flair. Later I found out that they already had excellent pieces on the demos as well. It is against all German and European laws that As The Deadworld Calls has not appeared on a regular album until today. But why am I telling you this? Because the Desaster fanboy in me finds it hard to admit to himself that Churches Without Saints does not radiate any special magic.

In the review of the last long-player I wrote that it was a question of honour to remain faithful to Desaster. That is still true, but it also indicates that it is no longer just a matter of fun and music. Sure, the four-piece has remained stylistically true to itself and the absolute rejection of commercial sounds still leads to many sympathy points. But unfortunately, the tried and tested mixture of stormy tempests, riff-accentuated passages and occasional medieval-inspired sections only succeeded well this time with cutbacks. 'Exile Is Imminent', for example, shines with a very cool guitar line at the beginning, but after 80 seconds the band switches to autopilot and offers a typical Desaster piece, as it could have already been on Tyrants Of The Netherworld. It's not bad, but the expectations raised at the beginning remain partly unfulfilled. Speaking of unfulfilled expectations, the title track is a viscous doom piece. I don't think it represents either the band or the album; worse, it makes it clear that sluggish rhythms and melodies are not the core competence of the underground institution. The song lacks dynamics, force and depth.

The following 'Hellputa' (fast, crisp, short) sounds afterwards almost as if the musicians had a guilty conscience because of the tired title track. But alas, this flat wannabe-bullet also lacks exciting substance. It has absolutely nothing that feeds my appetite to listen to it again. Aggravating the situation, the same can be said about the opener which fails to trigger any emotions. Fortunately, there are also a few real neckbreakers. 'Sacrilege', 'Queens Of Sodomy', 'Havoc', 'Sataniac' or 'Hellbangers'... it's just a pity that none of them is on the new record, as I realise just in time. Doubtlessly, Desaster have set the bar very high in the past. On Churches Without Saints, only the thunderous 'Sadistic Salvation', which is partly almost driven by blast beats, and perhaps 'Failing Trinity' live up to this standard. Here the compositional class of Infernal and Co. finally shines through and goes hand in hand with the unbroken and laudable attitude of the band.

I own a book on the history of the USA. In it, the author says that he was afraid to write the chapter on the extermination of the Indians because it was such a burden for him to recall these events. He says he was glad when he could finish the chapter. I felt similarly, only on a comparatively completely irrelevant level, about this review. It was not nice to write this text in view of one's own status as a Desaster maniac. Okay, the material still houses the nice cruelty Desaster’s music has always offered. Let’s be clear, Churches Without Saints is not a smudge in the discography of the Teutons. But let’s be clear again, it is a work that, in any case, cannot meet the highest standards. Despite some light ('Armed Architects Of Annihilation' wins in the course of time) there is also quite a lot of shadow. For example, the stale melody of 'Endless Awakening' seems to me as if the dudes have been using it again and again since the debut. Anyway, I'm glad to have reached the end of the review. The next album, EP or split will surely be better.

After five years of waiting, German black thrash legends Desaster will finally release their new album Churches Without Saints. After their old drummer Stefan "Tormentor" Hüskens has completely left for Asphyx and has been replaced by Marco "Hont" Hontheim, the curiosity is of course especially big of how this will be noticeable on the new album.

Churches Without Saints starts with a short, very epic intro, to then rush off with 'Learn To Love the Void'. Here you quickly find the usual trademarks like the typical Desaster riffing, but also a few more classic melodies have crept in here. 'Failing Trinity' starts like you are used to from older Desaster albums. Here again riffs and melodies are used that could have been on the late 90s / early 2000s albums. 'Exile Is Imminent' goes backwards even one step further in my opinion and reminds me in parts of the Lost In The Ages demo - very old school!!! The title track, on the other hand, provides quite a surprise, because the band is moving in quasidoom realms here, probably the slowest track the band has ever written. A rogue one which I think has something to do with Infernal's sideproject "Moontowers". The opening riff is very reminiscent of "Hells Bells" (with the appropriate bell sounds). 'Hellputa' is a pretty fast, aggressive song that includes a very cool Motörhead memory riff in the middle section! The song will definitely be pretty well celebrated live!!! The next songs are all very catchy black thrash grenades, which are also very convincing. With the penultimate song 'Endless Awakening' Desaster provide in my eyes, an absolute killer. I personally see it as the best song on the album. It starts with an acoustic guitar, which is rather unusual for the band and it is followed by an absolutely cool riffing, which is known from A Touch Of Medieval Darkness. I get goosebumps from it every time and the best part is that the song lasts 7 minutes!!! Finally, there is an outro called 'Aus Asche' which also features an acoustic guitar and gives off a little flair of old Moonspell with the whispered lyrics and guitar arrangements.

Production-wise, it can be noted that the band has changed their sound a bit and sounds a bit more mangy and old-school again. This does not mean that we have to deal with a rehearsal room flair here, every instrument and Sataniacs voice is clearly produced and it sounds more like the old Desaster and that was also the intention of the band. Mission accomplished!!!

So what is my conclusion for Churches Without Saints? I must confess that initially I had a little difficulty to make friends with the songs, as they are a bit more convoluted and not as catchy as on the last albums, but when you take the time to listen to the album more intensely (and you should definitely do that), it grows with every listen. The departure of Tormentor, (who is very happy with Asphyx), has also been well compensated. Horns up for Churches Without Saints.