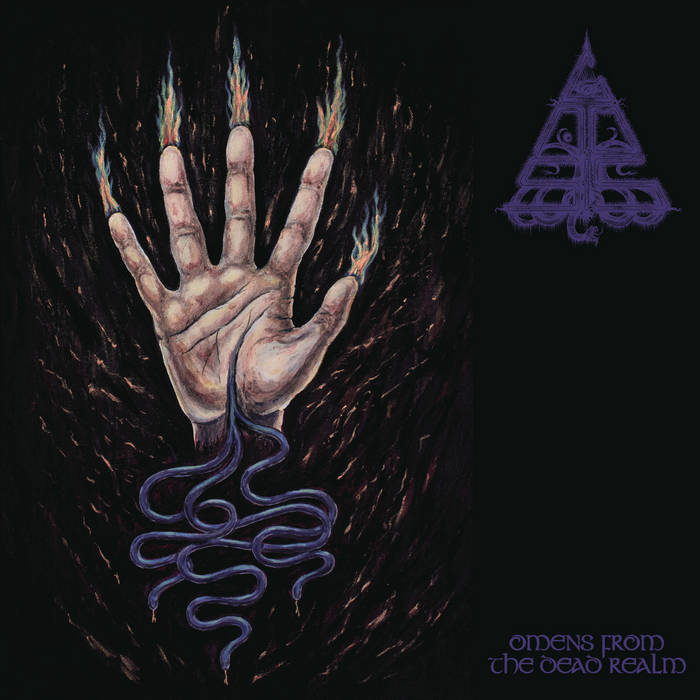 This morning I jumped into my 665eder (my money wasn't enough to get a next level 666eder) time machine and turned on the computer. Then I started the new Gnosis album Omens From The Dead Realm and told the computer to bring me to the year when this music was originally from. The years went back and suddenly the machine stopped. It was the year Bill Clinton became POTUS, a new discovered spider was named after Harrison Ford and Germany got their new postal codes. Fortunately, the machine didn't stop in 1994 when the German soccer team performed horribly during the WC in the USA.

But now let's come to reason why I got stranded in 1993. It is very obvious that the trio from Florida have a big weakness for the good old times. The first thought I had when listening to their third output was Mystifier combined with Rotting Christ. Gnosis play a solid mixture of death and black metal very often combined with creepy, gloomy doom parts which remind me of the first two Mystifier albums. Even the sinister vocals remind me of the Brazilians (or if you want, also Necros Christos (R.I.P.)). When they start using keyboards in their songs or increase the tempo, you can hop from South America directly to Greece, just to visit Rotting Christ or Varathron for a cool drink. The break between the Mystifier and the Rotting Christ part is made on 'Apzu, Sea Of Death'. It's a slow, evil track which starts to get very catchy and melodic in the middle section of it. Here the band first starts with a doomy part which is interrupted with a keyboard and some really well-arranged melodies that spread evil Mediterranean atmosphere. 'The Eleventh Step, The Gate Unknown' is a pure worship of old Greek black metal and a really great performance especially when you think about the last 2000 releases that Rotting Christ did. If you liked the old stuff, you will be happy to hear the three guys from Florida.

One could accuse Gnosis because of lack of self-reliance, but hand on heart, which band is reinventing the wheel these days? I am really happy with this old-school stuff and had a nice feeling of returning to my youth and my guess is: I won't be the only one who may think so. Well, if you grew up with these bands and like their old outputs, this is really worth checking it!!!

Well, now I have to return to 2021 (though, this is not the nicest time to be alive, I guess) and some of you may ask, if I can predict the lottery numbers – no, I cannot. This is time traveler law!!