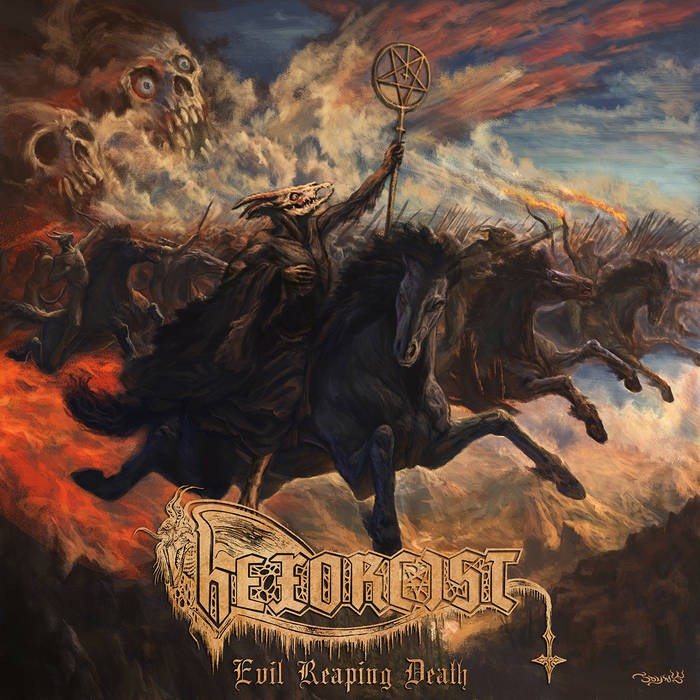 If you like and need melodies and some kind of joy in the music you listen to, you can instantly stop reading this and move on to another review. Hexorcist don't make music to make you happy (if I'm not totally wrong about that), maybe the intention is to create some stuff to play loud in the garden if you don't like your neighbors or to welcome your wife when she comes home, and you have the intention to get divorced in the near future.

Cavernous vocals paired with really sick guitar riffs and a thundering drumming would explain their musi(c)k the best. What those four guys from Miami play is a very old school version of death metal, sometimes quite primitive but never crude mixed with some also very old school black metal parts. The song structures are very repetitive but what makes this stuff quite interesting are the guitar solos. I guess they quite often listened to “Altars Of Madness” by Morbid Angel. I think that this would describe the sickness of these guitar solos best. But of course, this not their only influence. Bands like Sarcofago, Blasphemy or Sijjin (though this is a newer band) come to my mind while listening to Evil Reaping Death. 'Proverbs Of Pestilence' is one of the most outstanding tracks, peppered with a lot of guitar solos so that you can definitely see/hear that the guys can play their instruments. 'Denouncing The Immaculate' is another interesting track which starts with a sinister keyboard melody just to turn into a blackened, repetitive and hypnotic track full of evilness. 'Unrighteous Ceremony' is pure Morbid Angel worship, just listen to the first riffs of the track. Somehow, I have the band “Darklord” from Australia with their 94 Demo in mind, too. Maybe it's because of the little bit crooked sounds in that track. The last track is a cover of the 'Crucifixion' by US band Devastator taken from their 2007 album “Morbid Force”. I think they perform it quite well, and the sound is much better than on the original version.

Production-wise, the sound could have been a little bit clearer, but I guess with that raw sound appears to be the charm of that album, so I won't complain about that.

If you value cover of an album, you should definitely check the cover of Evil Reaping Death. I think that this is a very detailed and lovingly designed (which here is ironic) painting created by Johnny Prayogi.

What is my conclusion right now? I think Hexorcist could have used some more variety in their songs to make the tracks a little bit more distinguishable but all in all they have written a very solid old school death metal album which could fit very well into the mid/late 80s. Now get this one and invite your neighbors to a nice garden party with you as focus!!!