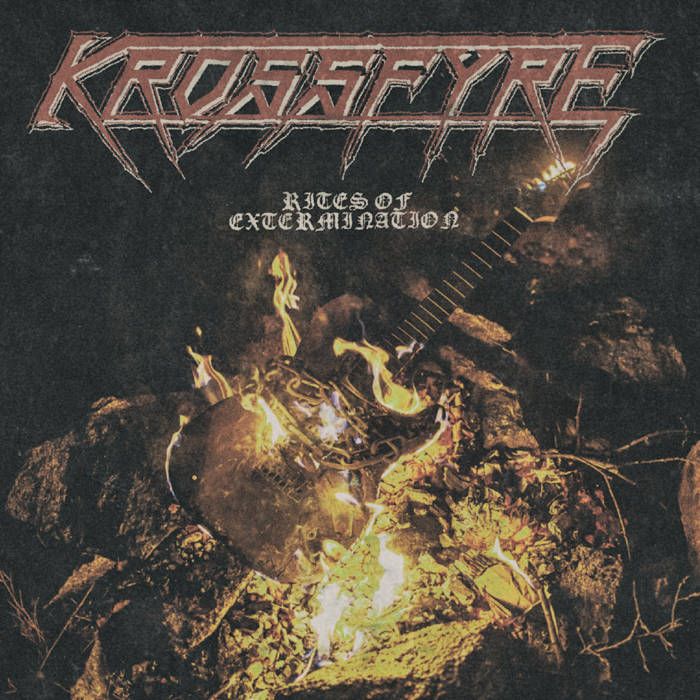 It burns everywhere. Metal Archives lists eleven bands called Crossfire. The only one I know is the Belgian edition, how shameful! However, I don’t think that even one of them performs as cruelly as Krossfyre from Spain. Already their EP revealed almost shocking brutality. In the meantime, I thought they would have been converted in their Catholic homeland, but, as always, I was wrong. And that’s great, because Rites Of Extermination lives up to its title and follows the line of the EP in terms of pure bastardism (sorry for this neologism, but you certainly know what I mean).

Right from the beginning, the filthy horde declares war on every form of harmonies. The basic guitar tone sounds insidious. Don’t think that things get more melodic when it comes to a solo or an outbreak of an additional guitar line. The band cruises along the borderline of thrash and black metal, driven by a drummer who likes to hurt his snare as much as he can and as fast as he can. But his thunderous hammering still leaves room for a few hymnal parts, for example in the midst of 'Infernal War'. The song benefits from this minimum of diversity – the title track, for instance, is just a pure outburst of aggression and it is absolutely okay, but it lacks the iota of refinement that makes things even more interesting.

The vocals are pretty uniform, but simultaneously great. There is a proper quantum on reverb on it and they express hate, scorn and brutality. In addition, the newscaster that appears in 'Casus Belli' gives the song an apocalyptic note – it reminds a bit of the intro of Dr. Living Dead!’s “Crush The Sublime Gods”. The guitar work is mostly fantastic. It marks the component that separates Krossfyre from many other black thrash formations, because the Spanish force never sounds primitive or clumsy. Naturally they do not over-emphasize their technical side, too. As a result, the band stays consequently within its stylistic frame and it’s up to you whether you like to praise the homogeneity of the material or not. For me, it’s easy. I like the entire album from the beginning to the end, although it slightly lacks catchy sections. Yet that’s no big deal. I focus on the rebel element that results from the combination of high-velocity thrash and a pitch-black mentality. This liaison marks the more than solid foundation of highlights like 'Infernal War', 'Casus Belli' and the absolutely excellent 'W. L. (Burn Like Fire)'.

In a nutshell, those of you who like the previous EP will also have a good time with Rites Of Extermination. The same applies for all maniacs who know the value of vehement songs with a good flow and a coherent configuration beyond the traditional verse-chorus-verse pattern. The wow effect is a little less than on the debut, but certainly the purchase of the album is an excellent investment. I will test this in the next few days.